A Memorial to Slaves

More than 300 people attended the dedication of the new Slavery Memorial on the Front Green during the 250th-anniversary weekend in late September. The ductile-iron work by noted African American sculptor Martin Puryear depicts a broken chain rising from a half-buried dome representing the half-buried history of slavery. The image suggests a ball and chain, but the broken link is polished to a mirror finish that reflects the sky, an element of motion, freedom, and hope. Not seen here is a nearby stone plinth with engraved text explaining the memorial’s intention to recognize Brown’s connection to the trans-Atlantic slave trade “and the work of Africans and African-Americans, enslaved and free, who helped build our university, Rhode Island, and the nation.” 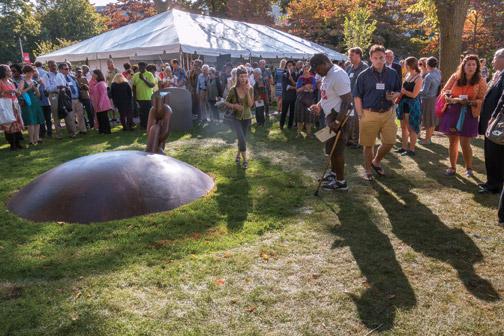 Reader Responses to A Memorial to Slaves