To discuss some of the most heated issues of the day, Brown held a series of forums on campus in September. Topics included the Ferguson, Missouri, police shooting and the turmoil in Gaza. 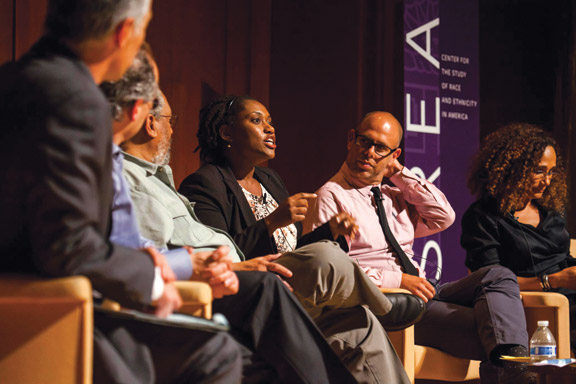 Panelists at the discussion on the Ferguson shooting focused on the event’s significance in the history of race relations. Professor of Africana Studies Tricia Rose ’87 AM, ’93 PhD, who directs the Center for the Study of Race and Ethnicity in America, assailed the media for putting the Ferguson events in only “microscopic context—what did this one policeman do?” Instead, she argued, we should view the protests in the shooting’s aftermath as a reaction to racism. Seemingly race-neutral policies, she said, can still produce racist outcomes: “We have no more racists, but we have enormous amounts of racism. There is a web of institutional, structural forces that create suffocation, despair, and limited opportunity.”

Professor of Africana Studies Anthony Bogues, who directs the Center for the Study of Slavery and Justice, called the Ferguson unrest a “flash point” showing that “communities are not quiescent. Things fester and then explode.” By wearing fatigues, carrying automatic assault rifles, and confronting demonstrators in tanks, he said, police reflected a new militarization of American society. Fear of another terrorist attack and greater surveillance have had an effect, he said, of turning Ferguson’s streets into “a war zone.” Whether intended or not, authorities now have new weapons, he said, to “deal with so-called disposable populations created by racism and certain economic orders in this country.”

At the forum on the Gaza Strip, Professor of History and German Studies Omer Bartov lamented the rightward swing of Israeli society. He said the Israeli government’s policy toward Palestinians reflects a belief that “territory is better than peace. There is always a rhetoric of peace, but the fundamental idea is that it is better to hold onto territory, and peace is only the last resort.” Israeli Prime Minister Benjamin Netanyahu, he said, was building “a political system that has fundamentally eroded democracy in Israel.”

At least one audience member found the panel one-sided. During the question-and-answer session, Adam Bennett ’16 said, “I don’t see Israel’s voice on this panel.” His comment was met with a smattering of audience applause.