About 13,000 alumni and students filled Brown Stadium on September 27 to root on the home team against arch-rival Harvard. ­Played on Saturday night as part of the University's 250th anniversary celebration, the game posted the second highest attendance in twenty years. Unfortunately, there wasn't much to celebrate.

After Harvard jumped to an early lead but failed at a two-point conversion, quarterback Marcus Fuller ’15 threw an eighteen-yeard touchdown pass to Reiley Higgins ’15, giving Brown a 7–6 lead at halftime. In the third quarter Andrew Coke ’16 rushed into the end zone to cap a ninety-five-yard, nine-play drive, but despite missing an extra-point kick, Harvard scored two touchdowns and a field goal in the second half to ice the 22–14 win. Still, Brunonians never stopped cheering or waving the rally towels handed out before the game started. Afterwards, fireworks lit up the night sky. 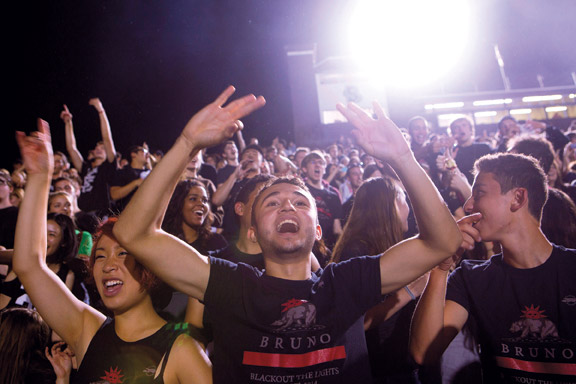