We’ve all heard the advice: when choosing a sport, pick one that will help keep you in shape throughout your adult life. Get yourself a set of golf clubs or a tennis racket. Take up running or biking. 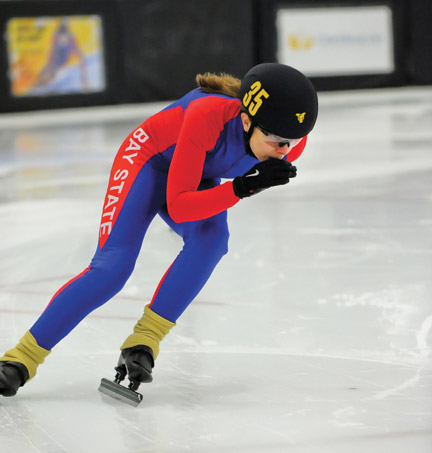 Doug Learned
"If you have an itch to do something," Zimmer says, "try it."

Maura Zimmer ’91 started competitive speed skating at the age of forty-two. Now that might not be that much of a surprise for a woman who had been a longtime hockey player. Both sports, after all, are played wearing skates, on ice, in a rink. You might expect Zimmer to enjoy zipping around the ice as a way to keep her legs strong and her heart and lungs in good shape as her peak competitive years recede safely into the sunset.

But two years after starting in the sport she was national champion in her age group. “That is a great thing that I have learned from this whole process,” Zimmer says. “When I was younger, I thought people who were talented athletes had God-given talent or not. As an adult I have learned that with desire and hard work you can achieve a lot.”

Why take up speed skating? Boredom. “I was bored with what I knew how to do in the gym,” she says. She had always worked hard at becoming a better hockey skater and had recently been working with a strength coach. As part of her workouts, she’d undergone several tests to measure her strength and speed: “I was surprised at how well I did.”

She was also ready to break free of the whole team thing. “I wanted to do an individual sport,” she says, “and I wanted one with an objective measure of success. With racing, you have a measure of speed and lap time, and you see where you fit in with the big picture.” She adds, “I still wanted something competitive.”

In 2012 Zimmer worked her way up to the U.S. National Short Track Championship. “It was my first season of competing,” she says, “and I knew I had a chance at it based on the times. But I also knew that everything had to go my way at the meet.”

Success in speed skating depends on achieving the fastest speed you can control. Lose just a whisker of that control and a skater will catch an edge or be disqualified for interfering with another skater while trying to pass. At the 2012 championship, however, everything fell into place for Zimmer, and she won all four of her races, tallying enough overall points to win the gold medal for women in the forty-to-forty-nine age group.

She returned to the nationals in 2013 to defend her title, but while she was passing a skater in the first race their skates made contact and Zimmer was disqualified. “In 2012,” she says, “I was nervous, but that gave me energy. In 2013 I was nervous, and it sucked the life out of me. I fell.” In the process she damaged an edge on one skate and was unable to get it properly resharpened during the tournament. Still, she came away with a silver medal.

“While you definitely don’t train for the silver,” Zimmer says, “I felt as if finishing that meet and getting on the podium were an exercise in mental toughness.”

A few weeks later, Zimmer competed in the Master’s International Short Track Championships. More relaxed, she posted faster times, but the competition was better, and so she narrowly missed a spot on the podium. To make matters worse, she sustained a concussion in the last race. Having had several concussions during her hockey days, she knew to take her recovery seriously.

“To succeed in a race,” Zimmer reiterates, “you have to push yourself to the edge, and you might feel like you are a little bit out of control. I felt a little cautious during the 2014 season because I didn’t want to get another concussion.”

Barring another concussion, Zimmer hopes to keep competing for as long as she can. And she has a message for the rest of us aging weekend warriors.

“I see people in our age group talk themselves out of doing something,” she says. “The easy excuse is ‘I am too old. All my good days have passed, and I can’t learn anything else or ever change as a person.’

“That is what I wish people would take away from my story: if you have an itch to do something, try it. A lot of the benefit is in the experience and the process, even if you never get to the top of the mountain. There are so many good things along the way.”

Reader Responses to Scratching the Itch