New books by alumni and faculty 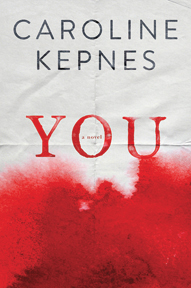 You: A Novel by Caroline Kepnes ’99 Emily Bestler Books)
It’s a Tuesday morning in the East Village when Guinevere Beck, a Brown grad, walks into a bookstore and falls under the sticky gaze of bookseller Joe Goldberg. A bit of banter at the counter, a name on a receipt, and Joe’s obsession clicks into gear. From that instant on, you can guess that nothing in this creepy, fast-moving thriller will end well. To complicate matters, Joe is witty, well-read, and an intriguing, nearly sympathetic character, even as he relentlessly stalks Beck. 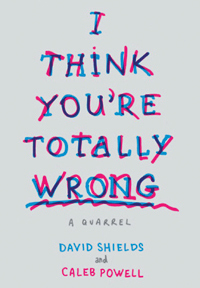 I Think You’re Totally Wrong: A Quarrel by David Shields ’78 and Caleb Powell (Knopf)
In this 261-page conversation, Shields, the author of How Literature Saved My Life and fourteen other books, and Powell, a writer and former student of his, go to a cabin in the Cascade Mountains for four days and talk, talk, talk. The conceit here is whether it is better to overcommit to art, as Shields has, or to overcommit to life, like Powell, who has lived all over the world and is now a stay-at-home dad. They hike, watch movies, and trade literary gossip while circling questions about art and writing, marriage and politics. The result is always interesting, sometimes annoying, and completely compelling. 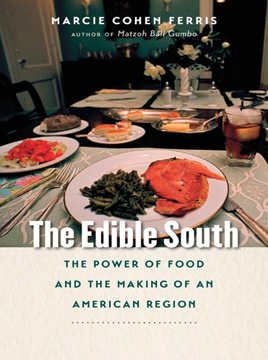 The Edible South: The Power of Food and the Making of an American Region by Marcie Cohen Ferris ’80 (University of North Carolina Press). Throughout this very readable survey, Ferris, an American Studies professor at UNC Chapel Hill, takes a wide-angle look at the varied roles food has played in shaping the South’s history and identity. Sifting through diaries, letters, and oral histories, Ferris traces food as both a commodity and a cuisine, moving from colonial outposts to slave-holding plantations, through the Civil War and segregation, and ending in the present.

The Visitor: André Palmeiro and the Jesuits in Asia by Liam Matthew Brockey ’97 AM, ’02 PhD (Belknap Press)

The Tailors of Tomaszow: A Memoir of Polish Jews by Allan Chernoff ’81 and Rena Margulies Chernoff (Texas Tech University Press)

Pitching & Closing: Everything You Need to Know About Business Development, Partnerships, and Making Deals that Matter by Ellen DaSilva ’10, Alex Taub, and Kate Rudd (McGraw-Hill)

The Universe Verse by James Dunbar ’05 (James and Kenneth Publishers)

Daughters of Hecate: Women and Magic in the Ancient World edited by Kimberly Stratton with Dayna Kalleres ’99 AM ’02 PhD (Oxford University Press)

We Are Better Than This: How the Government Should Spend Our Money by Edward Kleinbard ’73, ’73 AM (Oxford University Press)