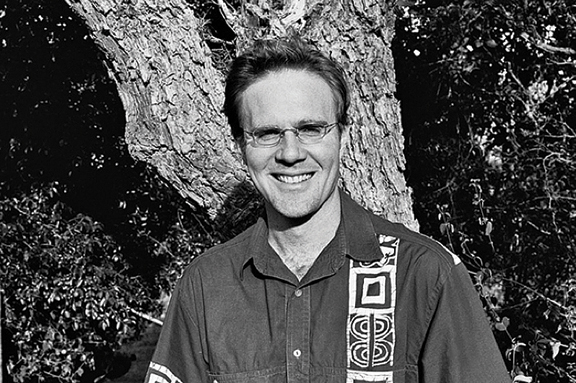 Despite his success in publishing, public speaking, consulting, and academia, William Powers ’93 is definitely not on the fast track. Powers, in fact, is a disciple of “Slow,” the worldwide movement to ratchet down the pace of modern life, minimize consumption, and maximize sustainability that has inspired much of his writing.

New Slow City, a memoir of the year he spent living as simply and leisurely as possible in New York City, is a follow-up to his popular 2010 green book, Twelve by Twelve, about living off the grid in a twelve-foot-by-twelve-foot cabin in North Carolina. That book angered and frustrated quite a few readers, Powers admits. Sure, they complained, it’s easy to live a simple and happy green life in some idyllic setting in the woods—but what’s a city dweller to do?

Even Powers experienced doubts after moving to Queens. Feeling overwhelmed by material clutter, consumed by work, and alienated from nature, he and his wife rid themselves of most of their belongings and moved into a 340-square-foot apartment in Greenwich Village. While his wife held down a full-time position at the UN, Powers, a self-described “work junkie” who had spent a decade in conservation and development-aid work around the world, set out to maximize his leisure time. Believing that 80 percent of our time is wasted, he set out to work no more than two days a week and to lead a “centered” and “mindful” life focused on the people, places, and nature around him.

Powers’s tale breezes right along, reading like a cross between a travelogue (much of his free time is spent exploring New York), a memoir (he and his wife are newlyweds expecting a baby), and a philosophical treatise (he rages against work-centric cultures and unsustainable, eco-damaging economies). He paces his writing to reflect his “slow” ethos, capturing in great detail what he sees, what he eats, and the people he meets. Some may find Powers overly eager to describe how a modern life ought to be lived. But readers who keep turning the pages will surely take away some inspiration.

We’re treated to his moongazing atop “Tar Beach,” the nickname for his beloved apartment rooftop; to the revolving cast of musicians he gets to know in Washington Square Park; and to his rambles through Central Park, the Rockaways, and Bear Mountain. He and his wife develop “tools” to promote slow living, including turning off gadgets on weekends and enjoying meals in silence, chewing each bite thirty times.

Like any good book, New Slow City maintains an element of suspense. Will Powers accept an enticing offer to take on more work? Will Superstorm Sandy, which devastates New York, destroy their image of the big city as a sustainable place to live? Will they continue living in their micro-apartment with the new baby? And, beyond that, will Powers quickly write another sequel . . . or just slow down?