They were two ambitious young athletes, one black, one white, who met at Brown and became roommates and co-captains of the 1990 basketball team. They also became lifelong friends. One was focused already on the dream of becoming an athletic director, while the other was a more typical college student unsure of his future direction. 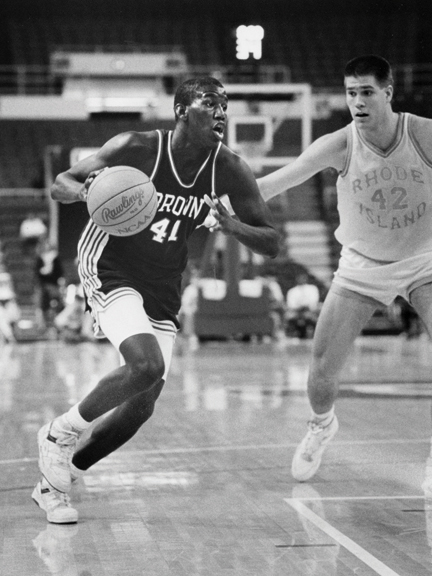 Brown Archives
Stanford's athletic director, Bernard Muir '90, was not only a cocaptain of the basketball team during his time on campus. He was already asking questions about a career managing sports.

Now, twenty-five years later, Bernard Muir ’90 is Stanford’s athletic director and a recipient of the 2015 NCAA Silver Anniversary Award, while Arthur Jackson ’90 is a successful entrepreneur and a regular participant in President Barack Obama’s basketball games.

During freshman orientation week, Muir approached Brown’s athletic director, John Parry ’65, and told him he wanted to work in athletics. “Throughout my time at Brown,” Parry recalls, “invariably a student would show up senior week and say, ‘Hey, what do I need to do to be an athletic director?’” He says Muir was the first student to ask him that question as a freshman.

Muir interned for Parry at Brown during the summer after his sophomore year, while the University was building the Pizzitola Sports Center, and the following summer became an intern for the Atlanta Falcons. By the time Muir was ready to graduate, Parry had become the athletic director at Butler University in Indianapolis. One day, when Parry was at Brown to watch his oldest daughter play softball, he ran into Muir and offered him a job as a Butler graduate assistant.

The timing was perfect. Butler that year hosted the men’s basketball Final Four, and Muir was able to work on a high-profile NCAA championship tournament alongside many NCAA staffers. After earning a master’s at Ohio University, he spent eight years at the NCAA national office serving as assistant director and then director of operations for the Division I Men’s Basketball National Championship.

Muir next moved on to Notre Dame for five years, eventually becoming deputy director of athletics. In 2005 Georgetown hired him as its athletic director. Four years later he became director of athletics at Delaware before moving on to the same job at Stanford in 2012. When Muir, along with former New York Yankees pitcher Mike Mussina and Olympic gold medalist and former WNBA player Jennifer Azzi, won the NCAA Silver Anniversary Award in January—the award recognizes outstanding athletic and professional accomplishments a quarter century after a college athlete’s graduation—Arthur Jackson was one of the first to congratulate him.

“I was always intrigued by college sports growing up in Gainesville [Florida],” Muir says, “and what would unfold behind the scenes and what it took to put on events. I love sports, and I thought if I could make that a career that would be terrific.”

Arthur Jackson wasn’t sure what he wanted to do when he arrived at Brown.

“That is one of the reasons I chose Brown,” he says. “It gave you academic freedom to try things.” One particularly influential course was Barrett Hazeltine’s legendary Engin 9, Management of Industrial and Nonprofit Organizations, which has launched the careers of literally thousands of entrepreneurs.

In Jackson’s case, however, the business drive had to wait for his basketball career to run its course. After graduating, he played in Europe for the Amsterdam Canadians while running school basketball clinics to make some extra money. “When you were in a foreign country,” Jackson says of that time, “and they had Americans come to their schools, they treated us like we were Michael Jordan.”

As his career in Europe came to a close, Jackson accepted an offer from Jim Larranaga, the men’s basketball coach at Bowling Green, to work as a graduate assistant coach while earning a master’s. It didn’t take long for Jackson to realize that college coaching wasn’t for him.

That’s when the lessons of Engin 9 kicked in. With a friend from Harvard, he began a start-up, One on One Basketball, that provided instruction in the game to anyone who wanted it. “At the time,” he says, “you could get tennis lessons or golf lessons, but for team sports there was no such thing as instructional programs.” The company provided individual lessons before moving into group instruction, school programs, and camps. “As time goes by,” Jackson says, “you have to adapt. I think that is one of the great things I learned at Brown. You have to constantly think ahead and see what the market is showing.” 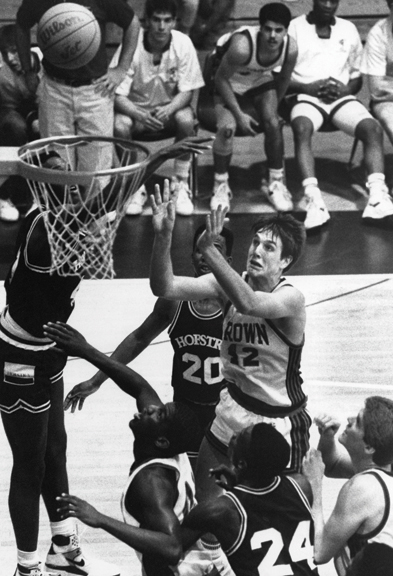 Brown Archives
Aurthur Jackson '90, cocaptain of the team during his senior year, could never have imagined that twenty-five years later he'd be playing at the White House with President Obama.

One on One leagues grew into club teams, which are now in twenty cities and adding two or three more each year. Jackson has also been able to set up a number of international programs in such places as Australia, Eastern Europe, Morocco, Panama, and Puerto Rico.

In addition to teaching basketball, Jackson, who lives in Washington, D.C., plays pickup games. His regular weekend group consists of a number of ex-Ivy players, including U.S. Secretary of Education Arne Duncan, a former Harvard player, and Reggie Love, who played at Duke and has worked as a special assistant to President Obama.

“One day,” Jackson recalls, “they said, ‘Would you like to play with the president?’” The first time he joined the White House game, his assignment was to guard Obama in a very competitive game. That day, Jackson’s team won the first two games and Obama’s team, which included Duncan and Love, won the next two. The president then asked for a rubber match, which Jackson’s team won. After congratulating everyone, Obama said, “I want a rematch.”

Every time since then, Jackson has somehow ended up on the president’s team.

“I think he really appreciated the fact that I played my hardest against him,” Jackson says. “I have been fortunate enough to play with him a bunch.”

One of the highlights was traveling with the president on Election Day 2012, when Jackson played with him and NBA Hall of Famer Scottie Pippen. After the International Basketball world championship game in 2010, Jackson teamed up with Obama against NBA stars Kevin Durant and James Harden.

Even after twenty-five years, Muir and Jackson remain close. “We’ve stayed in touch often and continue to seek each other’s advice, especially as it relates to our career plans and aspirations,” said Muir. “I consider us teammates for life.”