At its February meeting, following an affirmative vote by the Brown faculty, the Brown Corporation approved establishing two additional opportunities for Brown students to proudly serve our nation: Reserve Officer Training Corps (ROTC) programs with the U.S. Navy and U.S. Marine Corps at the College of Holy Cross and with the U.S. Air Force at Worcester Polytechnic Institute. While these contracts have not been finalized, all the necessary parties are in substantial agreement. Together with our longstanding relationship with the U.S. Army ROTC program at Providence College, Brown students will, once again, have access to the full range of military officer commissioning opportunities. 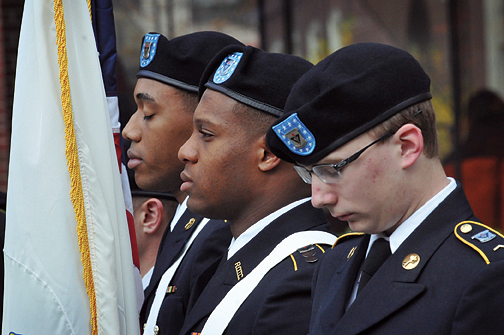 Frank Mullin
From left, ROTC cadets Johnathan Davis '16, Philip Smith '15, and Caleb Walters '18.
Brown has a long history with the military, from the University’s suspension of academic activities to become a military barracks during the Revolutionary War to establishing ROTC programs during and after World War II: Naval and Air Force programs at Brown in 1940 and 1951, respectively, and the Army through Providence College in 1951.

The Vietnam War reshaped the relationship between higher education and the military. In 1969, Brown’s faculty voted to limit the role of the military in all instruction on campus, ultimately resulting in the closing of our campus-based programs with the Navy and Air Force. Although the question of whether to revive ROTC was assessed periodically, and there continued to be advocacy and impassioned argument on both sides, antiwar sentiment and, later, objections to the military discrimination based upon sexual orientation, prevented the return of ROTC.

The 2011 repeal of “Don’t Ask, Don’t Tell” and the full acceptance of gays and lesbians into the military was a precipitating factor in our current expansion of ROTC. A campus committee commissioned in June 2011 by then-President Ruth Simmons made the case that Brown students should be given every opportunity to serve their country, even while recognizing the imperative that the military make progress on its enrollment policies. President Simmons recommended that Brown consider ways to expand access to Naval and Air Force ROTC for students, and I fully support the partnerships we are forging with Holy Cross and Worcester Polytechnic.

I have been asked by many alumni why Brown supports ROTC through collaborative relationships rather than hosting programs on our campus. I acknowledge that, without the full restoration of campus-based programs, it may be difficult for some of you to reconcile your pride in military service with your love of Brown. As pressures on the military’s budget threaten closures of ROTC programs nationwide, I believe that the collaborative model is the best solution to make ROTC available to our students in an ongoing way.

As we look to the future, there is sustained and deserved pride for the many alumni, faculty, and staff who have served or are serving our nation. We must also be proud of our commitment to nondiscrimination, first in response to the anti-gay policy of “Don’t Ask, Don’t Tell,” and now in our concern for discrimination based on gender identity by the U.S. military.

Brown welcomes the contributions that our ROTC students—currently five, with that number expected to grow—make to our community, along with those of our twenty-six students who are veterans. As Brown looks to develop new Master’s and Professional Studies Programs, we anticipate these will create opportunities to attract additional veterans to Brown. In 2012, we established the Office of Student Veterans and Commissioning Programs. A partnership between the Naval War College in Newport, R.I., and the Watson Institute is forging new academic connections, and a collaboration between the Providence Veterans Administration Medical Center and Brown is developing and testing technologies and therapies to help veterans.

These and other opportunities will shape the future history of Brown and the military. I look forward to signing agreements to bring Naval and Air Force ROTC opportunities back to our students, and to Commencement weekend, when we will recognize and honor our students and alumni who provide public service leadership through military service.