Lure of the Stage 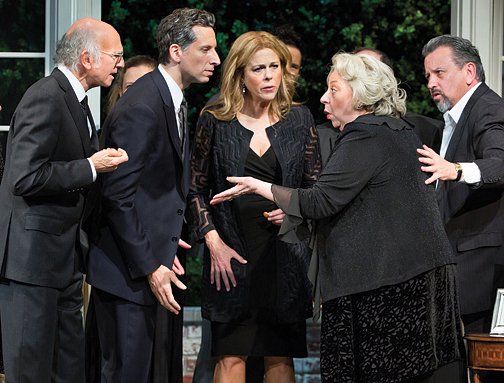 These days, Ben Shenkman ’90 is best known for playing the socially awkward concierge doctor Jeremiah Sacani in USA Network’s Royal Pains, though you may have seen him over the last decade in such shows as Damages, Grey’s Anatomy, and Law & Order.

But Shenkman’s roots are firmly in theater: he scored a Tony nomination as Hal in the Pulitzer- and Tony-winning play Proof, and, after spending a year performing in a regional production of Angels in America, earned an Emmy nomination for Outstanding Supporting Actor in HBO’s 2003 adaptation of Angels. With material like that on his résumé—combined with the grueling schedule of a stage production—the actor knew it would take something pretty special to lure him back to Broadway.

“I have young children now, and I’d been spoiled by having had great experiences in the plays that I’ve done,” he says. “It set kind of a high bar. It needed to be enough of an event to be worth giving up all the bedtimes.”

Enter Fish in the Dark, a comedy written by and starring Larry David, cocreator of Seinfeld and the force behind HBO’s Curb Your Enthusiasm. The show, running through June 7 at the Cort Theater, was a hit before it even opened—raking in a record-breaking $13.5 million in advance ticket sales.

In the play, David and Shenkman play bickering brothers struggling with the death of their father. Shenkman says fans will recognize elements of David’s wacky, politically incorrect sitcoms. “You know these aren’t going to be warm, friendly, highly functional relationships,” he laughs.

Yet, unlike Curb Your Enthusiasm, the play isn’t improvised. Shenkman says it’s a fully scripted, hilarious world of its own, one that has pushed him happily outside his comfort zone. “I’ve never done a new play that was out-and-out comedy before,” he says.

Raised in Bethesda, Maryland, Shenkman grew up acting in school productions. At Brown, he studied ethics and political philosophy, not intending to pursue a career as an actor. “There hadn’t been anybody from my world who’d become a professional actor,” he says, “so I didn’t know if it was something I could really accomplish.”

But the thriving performing arts community on campus reeled him in. He vividly recalls being cast in his first Brown production, ranking it alongside other major career breakthroughs. “The whole scene was just so impressive,” he says. “Once I was able to participate, it became totally consuming.”

Shenkman went on to earn an MFA from NYU, and, shortly afterward, he landed his first film role in 1994’s Quiz Show. Working with director Robert Redford and veteran actors such as Ralph Fiennes was inspiring. “I knew I was getting a special look at the Promised Land from the mountaintop,” he says.

Right now, a tired Shenkman is filming episodes of Royal Pains, which returns this summer, while doing eight performances a week of Fish in the Dark. Still, he wouldn’t trade this pace for anything. “It feels like an answered prayer,” he says.

Reader Responses to Lure of the Stage