If there were a Mafia version of the Marvel Comic Universe, Christos Gage ’93 would be a made man. Gage, who started writing and drawing his own comics as a child growing up in Worcester, Massachusetts, has crafted a Hollywood career that just hit the ultimate pay dirt: Gage is a key writer on the Netflix series Daredevil. 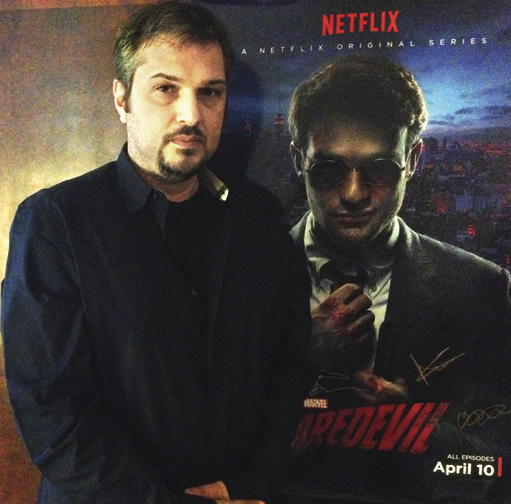 Based on the 1964 Marvel comic, Daredevil traces the life of Matt Murdock, a blind, tormented yet principled attorney who prosecutes criminals by day while slipping at night into his alter-ego Daredevil, who leaves the villainous scum of New York City’s Hell’s Kitchen physically brutalized and sometimes near death. Daredevil is the first series to circumvent traditional distribution channels entirely in favor of online viewing. It was downloaded 2.1 million times after Netflix, which produced the show with Marvel Comics, released all thirteen episodes online on the same day in April.

It’s thirteen hours of what Gage describes as super-sinister violence, heart, and a conscientious skew towards hope for a better world, all viewed through the lens of hyper-realistic, pseudo-noir cinematography. The series garnered such high critical and viewer acclaim that Netflix and Marvel quickly renewed it for a second season. “Obviously,” Gage says, “we had a great cast, incredible fight and stunt people, and overall an amazing crew.”

Gage says he inherited his love of writing from his journalist parents, Nicholas (a New York Times investigative reporter) and Joan (a longtime magazine writer). When Gage saw his father’s memoir, Eleni, adapted into a suspense feature film starring John Malkovich, he realized that screenwriting “was a thing” that a person could do as a career.

“I knew early on that I liked writing scripts and comics. Because it’s so much more visual, it suits my tastes,” Gage says. “I didn’t have the patience to be a novelist, and I wanted something more imaginative than being a journalist.”

At Brown, Gage concentrated in AmCiv. “The best thing you can do as a writer is have an interesting life,” he says. “Since I didn’t, I could study interesting lives in American Civilization.” After Brown, he spent a year at home writing sample scripts before applying to the prestigious American Film Institute (AFI). He got in on his first try and moved to Hollywood in 1994, then struggled for a decade before breaking into comic books in 2004 with the DC Comics miniseries Deadshot.

Gage met his future wife, Ruth Fletcher Gage, at AFI. The two have been writing individually and as a team for such hit series as Law & Order: Special Victims Unit and Numb3rs, as well as for the Sci-Fi film Paradox and the video games The Amazing Spider Man and Captain America: Super Soldier. They recently completed The Lion of Rora, a historical graphic novel.

“If you have skills and talents that complement each other,”  Gage says, “it’s great to have a writing partner, because you make a stronger whole.