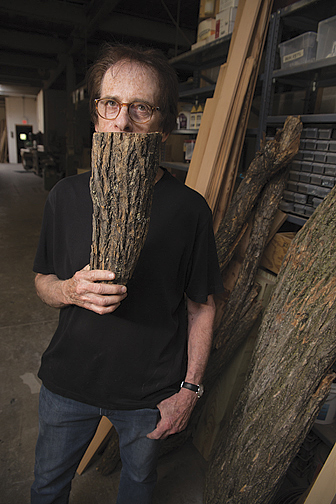 After earning a BFA from the Rhode Island School of Design in 1963 and an MFA from Tulane two years later, Fishman arrived at Brown at a time when, he says, “even art faculty wore tweed jackets to school.” He was a twenty-four-year-old lecturer and also a sculptor fresh off his first one-person show, which had been held in Boston. The attitude toward arts education at Brown was still dubious, Fishman recalls. Dance was part of the athletic department. “We were still fighting people who couldn’t see the value of an art course.”

What’s more, when Fishman arrived fifty years ago he had had no schooling on how to teach. So he modeled his early teaching on what had worked for him as a student. “I started as a very tough and strict teacher,” he says, “to disguise my youth and inexperience. I had a beard to make me look older than my students—which it didn’t do. Then my teaching evolved in a gradual ascent toward experimentation.”

He also drew on his work as a sculptor, which was characterized by curiosity and an empathy toward materials and their limitations. “When I started sculpture,” he recalls, “clay and plaster and wood were traditionally what you used. I liked to explore the properties in them and ask ‘What can you do with them that you don’t normally do?’”

Similarly, in the classroom Fishman pushed the boundaries of how the visual arts were taught. In particular, he was interested in including students who were not art concentrators so that together they could explore how art and other subjects might influence one another. His goal was to encourage students to explore a new way of seeing, to enrich their own academic disciplines by perceiving freshly. A favorite classroom exercise was “spots and dots,” in which students dipped a cork into black ink and used it to mark up a blank page. “That would teach one value of gradation and color,” he says, and allow students to make abstract or realistic images, seeing textures as the ink got lighter and lighter. The idea was to pay attention to what the materials were telling the student, a concept that could then be applied to biology or history.

“I was always arguing with the administration for the value of art and for supporting art on a level comparable to other subjects,” he says. “It was a long, slow debate.”

Looking back, Fishman believes his success at Brown—which roughly parallels the growth of the arts at the University—was in part a matter of timing. Culture was changing. Museums were becoming popular places to spend a weekend afternoon. Art professors stopped wearing tweed to class. Soon the New Curriculum was adopted, which helped nourish Fishman’s ideas about learning. “The New Curriculum emphasized the importance of thinking differently,” he says, “the importance of change, the importance of students as provocateurs and catalysts for change.”

He began teaching courses that more aggressively crossed disciplines, courses like Growth and Form in Art, Biology, and Mathematics. Despite their academic rigor, his courses became hugely popular, and at one point students spent the night in sleeping bags on the College Green to make sure they could enroll. (That ended when a lottery was created.)

“I never teach the same course the same way,” Fishman says. “I’ve slowly found ways of modifying a given syllabus into my own approach.” He would teach the basics of drawing and color theory, but it has always been important that he learn alongside his students. “Often I would give my students a material I wanted to use but wasn’t ready to use.” Together they would explore its properties and create from them.

Fishman says that a major turning point for arts education at Brown came with the completion of the List Art Building in 1971, which gave the visual arts a permanent home and exhibition space. Almost forty years later, Fishman, looking to further encourage collaboration across arts disciplines and to find larger performance and exhibition spaces, was instrumental in the conception and construction of the Perry and Marty Granoff Center for the Creative Arts, which was dedicated in early 2011.

That same year, as if to complement the new building, Fishman worked with Senior Lecturer in Theatre Arts and Performance Studies Julie Strandberg to found the Creative Arts Council, which includes representatives from each of Brown’s arts departments as well as from the David Winton Bell Gallery and the Rites and Reason Theatre. The idea, says Fishman, the council’s director, is to replace the existing competition among arts disciplines for precious University resources with a more collaborative approach. “If we can have a single goal,” he says, “we have a better chance with the administration.” 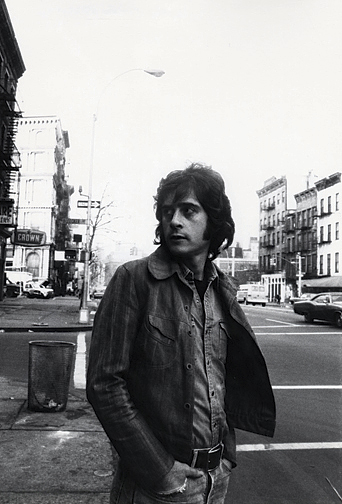 If there is one project that best encapsulates Fishman’s ability to be teacher, student, and artist all at once, it has to be the “Elm Tree Project” that began in 2004, when a large diseased elm just outside the entrance of the Watson Institute was felled. Fishman arranged to have the tree—which became known as Elmo—sawn into 30,000 pounds of boards. His idea was to invite the entire Brown and RISD community to “document, reflect upon, and work to continue Elmo’s legacy” through courses, exhibitions, performances, and works of art that would cut across academic disciplines, from art to biology. “The tree invokes ideas and feelings that extend throughout history, culture, science, and the arts,” Fishman said at the time. “This is an opportunity to examine these issues in a multidisciplinary approach with a diverse group of students and faculty.”

Fishman himself kicked off the effort with the Elm Tree Class, a visual art course that included seventeen students who, under Fishman’s encouraging yet critical eye, created works of sculpture, furniture, photography, video, and fashion. (He even asked this writer to take a board home and create something from it.)

“I get so much sustenance from students,” he says. “It has never been a one-way street.”

Reader Responses to The Student-Teacher