This year, TurboTax aired a series of hilarious ads in which “genius” academics show how easy doing taxes can be on the company’s app. One genius was computer science professor Michael Littman. How does a respectable Brown faculty member end up shilling for tax software? We had to know. 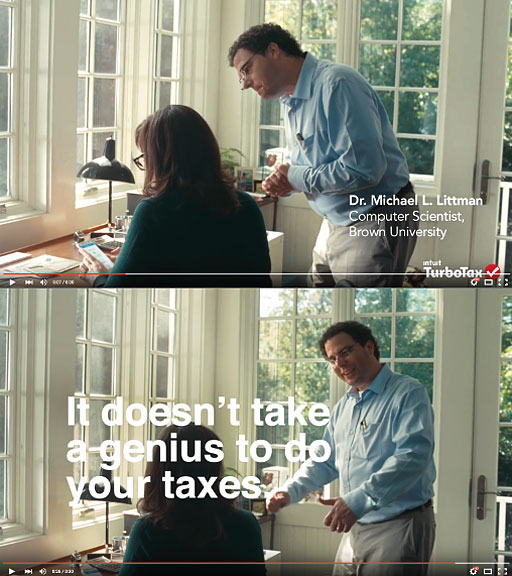 Courtesy Turbo Tax
Click on the image to see the Turbo tax commercial.

We hear there may have been some nepotism behind your landing this role.
You know, nepotism is a word, but network is a word, too. I’m not related to the creative director, he’s just a family friend. They had originally envisioned the commercial with some super-famous geeky people, like Nate Silver. But none of them were available. So then they were like, “How do we find second-tier geeks? Oh, we can contact the geeks we already know.”

What convinced TurboTax that you were the right genius for the job?
Mainly it was YouTube stalking. There’s a whole bunch of YouTube videos of me giving lectures, but also a whole bunch with me singing various songs. For my classes I like to write parody songs that summarize the material we’re covering. One of the things that really convinced them was seeing me on Dancing with the Profs, which is like Dancing with the Stars, only it pairs a professor with a student. I actually was a member of a winning couple last year.

Your interaction with the TurboTax customer is so hilariously awkward. How did you pull that off?
Well, I do have years of practice being awkward. And teaching is a form of performance. But performing is something I’ve spent a lot of time on over the years—mostly musical theater. I did some stuff in high school and in college and started up again a couple of years ago. In the script [for the commercial] I was not so awkward, actually. But the actress they hired to play Anna was in an improv company in New York, and they told me, “We’re just gonna let her improv a little bit, so just go with that.” She thought it was funnier to go in the awkward direction, and they liked it.

Was it fun?
It was sort of extreme, emotionally, in the sense that it was really fun but there were also moments that were upsetting. Having the costume designer look me up and down to see if I was acceptable...it was a little humiliating. They’d take a picture of me and send it to a director, who kept saying, “No.”

How did they finally choose what you wore?
The costume person had brought a whole bunch of outfits, and I’d brought a whole bunch of outfits. I was hoping that the costume person would improve my ability to pick out clothes. There was this mustard T-shirt they brought that I really liked, but they thought it looked too cool. In the end they chose an outfit of mine. They wanted the “geniuses” to play themselves, and they wanted me to look geeky. I’ve been getting a lot of feedback from friends and family and they say, yeah, that was you.

Do you think you’ll do something like this again?
I am guessing there’s not a huge market for that particular character, so no. Hollywood directors are not calling. But I’ve heard from a lot of people who know me. I’ve been tracking random people who’ve contacted me who’ve seen the commercial and where they’re from. Each time someone calls or e-mails me, I put it on a list. It’s at 102. The best was this student. She e-mailed to tell me she’s taking my class—I’m not actually teaching it, I’m on leave this semester—but the commercial got her interested in computer science, and she’s really loving the class.

Reader Responses to The Genius