When Niyo Moraza-Keeswood was in high school, he was not outspoken at all. As one of the only Native American students in his Massachusetts school district—he’s part Navajo, part Chichimeca (Indigenous Mexican), and “more or less an adopted Wampanoag—he says. “I kept to myself.” 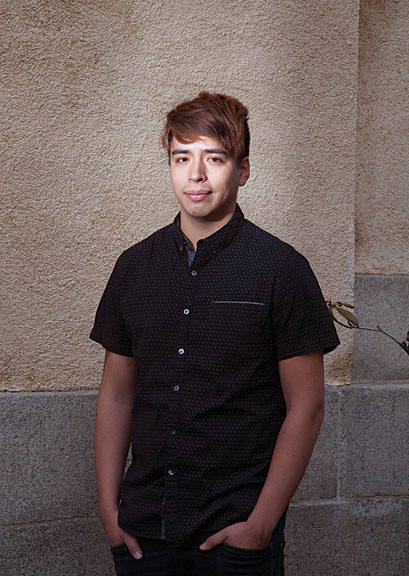 Those days are gone. The anthropology concentrator leads University tours for prospective students and pops up pretty much everywhere else on campus, too, says anthropology professor Stephen D. Houston. “If there is a worthy, forward-thinking proposal or movement, there is Niyo at the forefront, organizing, getting things done. He is affability itself, and a true leader.”

“I’m not a fan of power dynamics,” Moraza-Keeswood says, trying to downplay his leadership. But he doesn’t downplay his love of Mayan archeology. “One of the first classes I took was ancient Maya writing,” he says. “You get to learn a dead, lost writing system: How doesn’t that sound really cool?!” His senior thesis on Guatemala’s Piedras Negras ruins is set to become a chapter of a forthcoming academic book.

But, in his case, one passion is not enough. He coordinates the Native American Heritage Series, which offers lectures and runs the annual Brown powwow; he’s a supervisor for the Department of Public Safety’s nighttime Safewalk program; he’s a coordinator for the Orientation Welcoming Committee; and he’s been a resident adviser to high school students for Summer at Brown. He’s also been active in local Black Lives Matter demonstrations, in the Chicano student group MEChA, and in the successful bid to rename Fall Weekend (formerly Columbus Day) as Indigenous Peoples Day.

There’s Japanese martial arts, too: Moraza-Keeswood is president and cocaptain of the Brown Kendo Club. “Who wouldn’t want to learn how to swordfight?!” he asks. During a semester abroad in New Zealand, he learned spoken Maori. “Who doesn’t want to go to New Zealand?!” He even interns with the Haffenreffer Museum’s “Think Like an Archeologist” program, teaching stratigraphy and pottery reconstruction to Providence sixth-graders.

Moraza-Keeswood credits his ability to participate in the larger community to the support he gets from the student group Native Americans at Brown (NAB). “Being a Native student at Brown can be difficult,” he says. “It’s an institution that was not made for us.” Natives often have closer ties to family and “kind of a different viewpoint on life,” he says. “It’s helpful to have other students who understand where you’re coming from.”

Moraza-Keeswood first saw Brown in middle school, when his family started going to powwows all over the Northeast. His mom, a housekeeper, had moved from Los Angeles to New England to try to prevent her sons from becoming gang members. Instead, Moraza-Keeswood became a traditional grass dancer—and now a soon-to-be-published academic with ambitions of becoming a professor.

“Brown has been such an eye-opening experience,” he says, “establishing a connection with who I am and a growing sense of pride in being a Native person.”

Reader Responses to The Affable Leader