When the English department’s Beth Taylor was teaching a writing class called “Narrating History” not long ago, she and her students explored the many boxes of archives at the Hay on Brown’s anti–Vietnam War protests. “Do we have any files on our vets?” she asked the archivist. The answer was no. So, despite being “of the antiwar movement,” Taylor says, she set about correcting that imbalance. 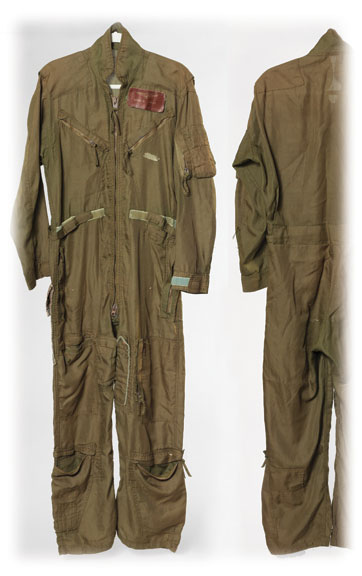 Thanks to Vietnam vet David Taylor ’65 (no relation), she taped oral histories and tracked down objects from alumni who’d served in Vietnam. This collection, which she’s still trying to expand (contact her at elizabeth_taylor@brown.edu) has “reached critical mass,” she says, and will be on display at the Hay from May 28 to August 19.

One object is Taylor’s flight suit, pictured here. Taylor, who’d attended Brown thanks to ROTC, flew 700 combat missions in Vietnam. “I physically observed the deaths of two of my Brown classmates who were also Navy aviators,” he says.

Though he’d had second thoughts about the war himself, Taylor wasn’t prepared for the chilly reception when vets came home. “I went thirty, forty years before I got a ‘thank you for your service,’” he says. Beth Taylor notes that, after a long time feeling unappreciated, vets are grateful for being included again in the Brown community.