Chronicle of an Epidemic

It was 1984, during the early days of AIDS in New York City, when twenty-five-year-old Ysabel Mendez went dancing with her gay best friend. At the club she met a man who took her to his car for a tryst that would infect her with the virus and, ultimately, both end her life and begin it anew. The new novel Christodora, by Tim Murphy ’91, is an epic paean to the lives lived and lost during that time. It’s a kaleidoscopic portrait of more than a half-dozen characters spanning forty years of love and longing. Rage and grief are central here, but so is hope. 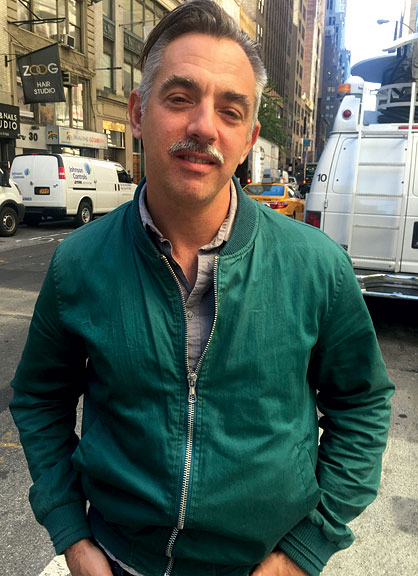 As a journalist, Tim Murphy '91 covered AIDS for twenty years.

The novel centers on a boy born to Ysabel during the last months of her life. In a bittersweet irony, Ysabel’s last years are marked by a newfound joy and purpose born of becoming an AIDS activist. In declining health, she moves into a group home for women with the virus and encounters Ava, a former top official in New York City’s health department who quit in frustration over the city’s inaction on AIDS and who now runs the group home.

Hector, a young man who begins the novel as Ava’s intern at the health department, later discovers his talent for activism; he fosters the same in Ysabel when she shows up, bewildered and sick, at a meeting. Hector throws himself into his work, pushing for funding and research to combat the disease, but soon anger and sorrow overwhelm him, and we watch his life spiral into squalor and despair.

It is Ava who links Mateo, Ysabel’s little boy, with her own daughter, Milly. Milly and her boyfriend, Jared, begin the book in their twenties, and we watch them date, break up, reconcile, marry, and eventually adopt Mateo, who is by now an orphan. Milly and Jared are both privileged and blithely bewildered by their privilege. Like the Christodora, the building where they raise Mateo—a former immigrant settlement home turned condo building amid a rapidly changing neighborhood—they seem to float atop the change rocking the neighborhood and the communities around it, unaware of the role they have played in that change. Little Mateo is tangled up in it all: sweetly oblivious as a child and, self-destructively, less so as a young adult.

A journalist who has covered AIDS for twenty years, Tim Murphy has written a novel that doubles as an authentic and raw history. In an era when HIV is more of a manageable illness than a death sentence, the book is an important reminder that less than a generation ago, with the gay community burying its dead, activists like Hector and Ysabel were storming the CDC in an eventually successful attempt to demand that promising drugs be made available to patients who needed them most.

Christodora is a sprawling, engaging, readable book that doesn’t feel nearly as long as its 430 pages. Murphy favors clean sentences and simple words, and the intricate scaffolding holding the characters’ lives together provides surprise moments of pleasure as interconnections are revealed. It’s clear which characters Murphy feels the most affection for, but he resists letting any of them become too precious. Their deep flaws are sketched with care. And Murphy’s refusal to veer into the maudlin allows us to believe him when he ends the book with a mural of bright colors and a park unexpectedly suffused with sunshine.

Reader Responses to Chronicle of an Epidemic