Peter Baek ’19 is a premed student, a scientist, and an explorer—thanks to a Disney movie. 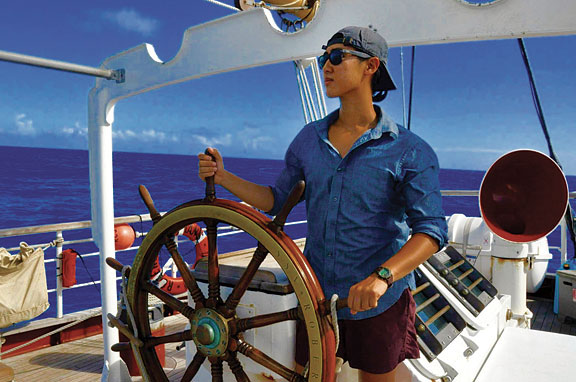 “Ever since watching Finding Nemo with my grandpa and dad,” he says, “our love for fish and the ocean blossomed as every shelf around the house became occupied with aquariums.” Looking after all those fish inevitably led to an interest in science, Baek explains, and then to oncology: “The passing of my grandpa from laryngeal cancer transformed my interest in science to something deeper—the desire to pursue a career in oncology in dedication to my grandpa.”

In the years since high school, marine biology and cancer medicine have become inseparable to Baek. He’s learned, for example, that the tentacled aquatic animal bugula produces a chemical that has shown promise in fighting cancer. Before arriving at Brown last year, he spent summers learning about cancer biology in labs at the University of Pittsburgh and the National Institutes of Health.

At Brown, Baek quickly found his way to the developmental biology lab of Professor Gary Wessel, who uses marine organisms to study reproductive biology. But one thing he hadn’t yet experienced was research on the open seas. Then Isabella Martinez ’17 told him about her adventure on a research voyage organized by the Sea Education Association (SEA), which is based in Woods Hole, Massachusetts. “I was immediately awestruck,” Baek says.

So this past summer, Baek joined a six-week research voyage on the tall ship Robert C. Seamans to the Phoenix Islands, an archipelago of atolls tucked into the southeast corner of where the equator meets the international date line. Dubbed “SEA Semester: Protecting the Phoenix Islands,” the for-credit expedition brought together undergraduates from around the country and a professional crew—a total of forty people—aboard the ship.

Their mission was to gather data about the delicate marine ecosystem of the islands, the world’s largest—and deepest—UNESCO World Heritage site. Their findings about climate change’s effects on the coral wilderness’s environment and ecology will be shared with policymakers governing how the ecosystem is conserved.

Baek had a particular project: tracking the abundance of larval tuna to better understand the Phoenix Islands’s role as a breeding ground for the economically and ecologically valuable species. He also got a crash course in sailing, participating in an exhausting eighteen-hour “watch” cycle: six hours of controlling the boat followed by twelve hours of rest.

“Initially when I signed up for this program,” he recalls, “I assumed that I would spend the majority of my time conducting research and relaxing under the ocean breeze while looking out into the horizon with a cup of tea in my hand. Only after did I realize that the students would become part of the forty-person crew that would run the ship.”

The voyage started in Hawaii on July 2 and ended on August 13 when the boat docked in American Samoa’s capital city, Pago Pago. Baek now counts among his mentors Brown alumna Kelsey Lane ’10, the ship’s first assistant scientist, who inspired him with her dedication to conservation and taught him how to perform much of the science.

“Academically,” Baek says, “it has given me a stronger conviction to continue to pursue my passion for marine biology and integrate it with my interests in medicine.”

Reader Responses to Sailing for Science