A Life In War

Filmmaker Ken Carlson ’86, who has produced such television shows as America’s Most Wanted and Lost, stepped into a different world with a documentary about his classmate Tom Catena ’86, a doctor based at a remote hospital in war-torn Sudan. 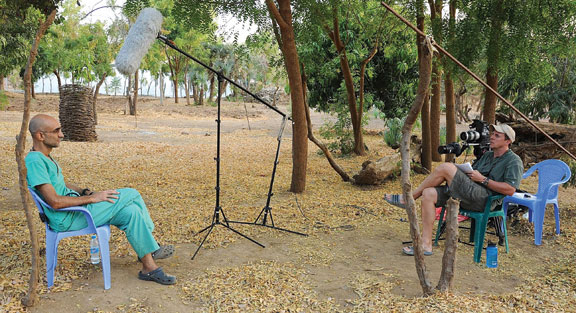 Given the dangers of the area where Catena lives and works, Carlson found it “hard to convince a cameraman” from America to go along—and “impossible to convince them to go back a second time.” And no wonder.

During one of those trips, “standing on an airstrip in Turalei, South Sudan, next to the plane,” says Carlson, “I thought I was about to die. Soldiers, guns, shouting—the whole thing. Somehow in this crazy scene I dropped Dr. Tom’s name and everything stopped. A few minutes later, I was on my way with an escort. The first thing to know about Dr. Tom is that he is so loved—so necessary to the survival of so many people—his name has the power to save your life.

Based at the Catholic-run Mother of Mercy Hospital since it was built in 2007, Dr. Tom, as locals call him, is the only physician for 200 miles, serving a rural population of about a million people. Besides childbirth, malnutrition, and leprosy, he routinely deals with wounds inflicted by indiscriminate bombings ordered by Sudanese president Omar al-Bashir, who is wanted by the International Criminal Court for crimes against humanity and war crimes in Darfur.

Making The Heart of Nuba, Carlson says, took six weeks of filming over more than three years and was followed by “years of editing.” The creator of the documentaries Amargosa (a 2003 Emmy award winner) and Go Tigers!, Carlson financed the entire project along with his wife, Katrina Shoen Carlson ’88.

The film shows Dr. Tom in his element: explaining injuries or illnesses to the camera as he interacts good-humoredly and compassionately with patients, in Arabic. The camera follows him on a coffee break, hand-washing his clothes, and praying at the hospital chapel. Toward the end of the film, he marries his Sudanese girlfriend, who helps him run the hospital.

At the documentary’s premiere at the Avon Cinema in Providence during reunion weekend last May, Carlson talked about seeing Dr. Tom perform seventeen surgeries in one day, including “amputations, lacerations, shrapnel removal, and a horrific D&C procedure on a full-term pregnancy."

Then, after more than ten hours in the operating theater conducting these “grueling and gruesome procedures” that were “thoroughly exhausting mentally and physically,” Carlson says, “he grabbed a ladder, climbed onto the roof, and not only fixed broken solar panels but cleaned them” so the hospital could function at first light the next day.

The film includes hair-raising footage of bombings. We see women, children, and men running and piling into the foxholes they have dug around the hospital. A little girl dies and her family grieves. Dr. Tom and others at the hospital shot some of this footage, using a camera Carlson had left with them.

“Never did I think” says Carlson, “that he’d have the wherewithal to grab the camera out of his desk drawer when he heard incoming Sukhois and shoot some of the most harrowing footage of the film!”

Ultimately, “if we can make a difference,” Carlson says, encapsulating Catena’s belief, “and stop this genocidal maniac, then it’s worth having lived this life.”

Reader Responses to A Life In War