For John Bonifaz ’87, being put on probation for political activism was one of the high points of his time at Brown. It turned out to be good career preparation, too—he’s been a professional advocate for decades, never shying away from a fight, even on seemingly intractable issues. 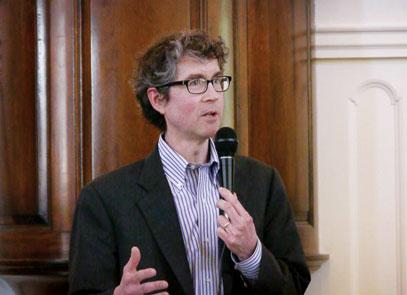 As a leading campus activist, Bonifaz was part of the group behind the notorious “suicide pill” student referendum of 1984, which sought to highlight the dangers of nuclear war by making suicide pills available to students in the event of a nuclear warhead launched against the United States. As the founder of Students for an Ethical Government, he spearheaded a 1986 referendum calling for the impeachment of President Ronald Reagan. Ending apartheid was another priority for Bonifaz, and he was part of a group of students who went to a Brown Corporation meeting and vowed not to leave until it voted to get rid of the University’s investments in South Africa. The Corporation refused and changed rooms, and that’s when Bonifaz became one of twenty students put on probation for their protest. It’s a punishment he’s carried as a badge of honor ever since.

After Brown came Harvard Law School, where he organized sit-ins in the dean’s office to protest such issues as the lack of racial diversity on the faculty. It was at Harvard that Bonifaz latched onto an issue that has shaped his career: campaign finance reform. As an advocate trying to reduce the power of big money in politics and elections, he could be seen as tilting at windmills. But he insists that dealing with campaign finance reform is an inevitable part “of a longer trajectory to ensure American democracy.” He quotes Martin Luther King Jr.: “The arc of the moral universe is long, but it bends toward justice.”

Bonifaz’s early campaign finance reform work included starting the National Voting Rights Institute, and his mission got an important boost in 1999, when he received a MacArthur Foundation fellowship—a “genius” award. The fellowship, he says, added to his credibility—“I got more phone calls returned”—and helped him pay off law school tuition debts and buy a house.

More importantly, the “genius grant” gave him freedom to put his legal background to work and address other issues. After President George W. Bush invaded Iraq, Bonifaz assembled a coalition of soldiers and members of Congress to file a 2003 lawsuit against Bush for violating the Constitution’s war powers clause. He also wrote the book Warrior-King: The Case for Impeaching George W. Bush. He lost the case but drew attention nationally to the legal issues behind the Iraq War. In 2006, Bonifaz lost a bid for Massachusetts Secretary of State but won praise for his energy and vision. He has also worked on international human rights and environmental litigation.

But for Bonifaz, who lives in Amherst, Massachusetts, with his wife and daughter, campaign finance reform has been his central focus. In the 2010 case Citizens United v Federal Election Commission, the U.S. Supreme Court ruled, 5–4, in favor of Citizens United, a conservative nonprofit organization, saying the constitution’s guarantee of freedom of speech extended beyond individuals to groups—and that an organization’s political campaign contributions, however large, fell under that right. Bonifaz calls it “one of the most disastrous court decisions of the past century.”

The day of the decision, he announced the formation of a new national organization he continues to head: Free Speech for People, which uses the legal system to stop unlimited corporate campaign spending and to prepare test cases for the Supreme Court. He hopes that the Supreme Court justice appointed to replace Justice Scalia will vote to overturn Citizens United. Free Speech for People is also promoting a constitutional amendment to overturn both Citizens United and the Supreme Court’s ruling in Buckley v. Valeo, a 1976 decision that struck down election spending limits. Disregarding naysayers, Bonifaz says he has seen “enormous progress” on campaign finance, especially increased public awareness of the dangers of unregulated spending.  “I’m optimistic about power that builds on the grassroots level,” he says.