Prick Up Your Ears

For a while it seemed that Noah Kraft ’09 was on his way to becoming a showbiz bigwig like his father, Robert, who was president of 20th Century Fox Music for two decades. Even before Noah left Brown, he’d teamed with Wall Street financier Chad Verdi to produce (with Scorsese, no less) Bleed for This, a film about the Rhode Island–born boxing champ Vinny Pazienza. (It comes out in November.) 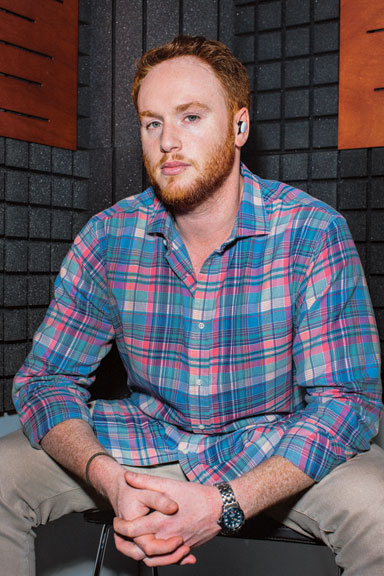 Courtesy Noah Kraft
But the Hollywood life wasn’t for the younger Kraft, after all. “The culture around it is fun, but I’m not the type of person who likes schmoozing and waiting on scripts,” says Kraft, who concentrated in international relations and history and who spent a semester in Ghana while at Brown.

But he did like what he calls the “tactile, getting-my-hands-dirty” aspects of the job. So he set his sights toward entrepreneurship, working as a consultant for Google and for Lyor Cohen, a music mogul like his father. Working in the music biz, Kraft says, “I realized that audio is really important to me. I wondered, ‘How can we better curate our audio environment?’”

That led to connecting with his current business partner, Fritz Lanman, an investor in such tech companies as ClassPass, which lets members sample different fitness studios. Lanman and Kraft decided, Kraft says, that “we wanted to put a computer speaker in everyone’s ear, like in the movie Her or in Star Trek.”

They started a company, Doppler Labs, which eventually raised $50 million and developed Here Active Listening, an earbud that connects to an iPhone app so users can, in Kraft’s words, “curate” how they hear the world, turning up some sound layers while turning down others. The earbud allows a user to be the only person in the car to hear GPS directions, for example, or to create a sound bubble around his or her dining partners in a crowded restaurant. The device can be hand-adjusted on the app or can “learn” one’s listening patterns, allowing it, for instance, to automatically sense that you have walked into a loud eatery and switch to restaurant mode. And there are such special effects as reverb and Carnegie Hall mode, for creating concert-room acoustics.

Kraft boasts that Time magazine named the device one of the greatest inventions of 2015, alongside the Tesla Model X and Google Cardboard. After its recent release to select users, it’s on the full market now for $299.

Kraft just moved Doppler Labs from New York City to San Francisco to be closer to more engineering talent. And he’s hired a dozen young grads from Brown, which he credits with nurturing his entrepreneurial instincts. “Being treated like an adult there from Day One had a huge impact on me,” he says.

Being a start-up wiz leaves little time for outside activities. “My life is my wife, whom I love dearly, and my business.” (Kraft is married to Caroline Straty ’10, who runs her own French tutoring business.) And he’s not afraid of mixing the two.

“The first time my wife used the earbuds,” Kraft recalls, “we were going out to dinner in Marin. We were standing in the parking lot and she said, ‘Oh my God, I can hear the birds and trees way over there!’ And I thought, ‘Wow, birdwatchers are going to love this.’”

Reader Responses to Prick Up Your Ears