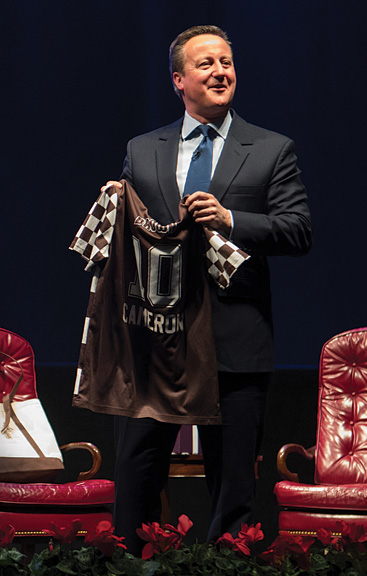 In the face of globalization and the rise of populism, Cameron said, we need to reaffirm the fundamental Western values of freedom and rule of law. His speech, “Contemporary Global Challenges: Where Do We Go from Here?” was the ninety-fourth Stephen Ogden Jr. ’60 Memorial Lecture on International Affairs.

After an introduction by President Christina Paxson, Cameron, referring to White House claims that British intelligence may have helped Barack Obama spy on then–presidential candidate Donald Trump, loosened up his audience by noting that no longer being prime minister has its perks: he didn’t have to listen to Trump’s wiretaps anymore. “Just to be clear,” he added. “That’s a joke.” Further endearing himself to the crowd, Cameron then traced the current fake-news epidemic back to Josiah Carberry, the former Brown professor of psychoceramics—thereby creating some fake news of his own.

Cameron, the United Kingdom’s prime minister from 2010 to 2016, believes that free market economics through responsible capitalism and global foreign trade is still the best approach to globalism, even though not everyone has benefited. The problem, he said, is that Western democracies have not paid enough attention to people who have lost jobs, and even hope, thanks to this approach, which has led to nationalist, anti-globalist upheavals in the form of Brexit and the election of Donald Trump. Cameron suggested a greater public policy focus on economic mobility—strong minimum wage laws, increased job training, and a heightened emphasis on education.

On the subject of Islamic extremism, Cameron argued, national sovereignty requires immigration control and strong borders, but it is wrong to persecute particular groups for their ethnicities or religious affiliations. “We must play our part,” he said, “standing and fighting alongside the moderates and against those who are wrecking this great religion [Islam].”

Cameron then called for the United States and Britain to preserve the integrity of our democracies in an evolving global and political climate in which countries such as Russia and China, as well as movements of nationalist populism, are on the rise, threatening our core values of freedom, tolerance, and equality. At the same time, our future success, he argued, depends on the success of Western democracies in helping developing nations.

“Soon, half of the world’s poorest will be in fragile states—countries that are prone to conflict, corruption, and even collapse,” he said. “We need a much greater focus on what makes nations fail and how we can help them succeed.”

After his lecture, Cameron sat alongside President Paxson, who asked questions from faculty and students. As the event came to an end, Cameron encouraged students to remain optimistic, leaping to his feet with enthusiasm: “There is nothing more satisfying, interesting, and compelling,” he said, “than public service.”