The Face of Syria

The room of forty students fell silent as the interpreter processed the question from English to Arabic: Why did you come to the U.S.? 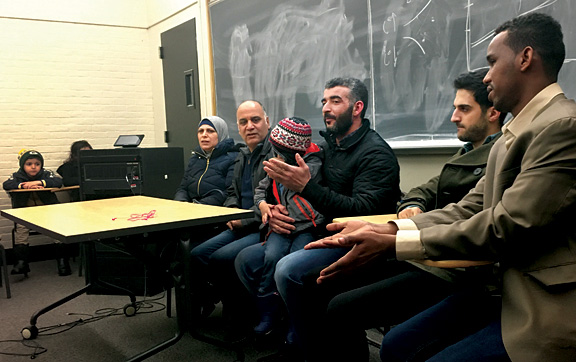 Emily Rudder '18
On April 6, recent Syrian refugees in Rhode Island spoke to students about their culture and their new lives in the United States.

“We came for new opportunities, to educate our children,” one Syrian man, a former truck driver, told the students, as his young son scrawled English alphabet letters on a chalkboard behind him. “We are not extremists in any way.”

This exchange happened at a “talk-back” event on April 6 held by the Brown Coalition for Syria, founded last year by Ben Gladstone ’18 and Rachel Trafimow ’19 as a Hillel interfaith project. Syrian refugees told their stories and answered questions from Brown students, revealing the personal side of the Syrian conflict.

Gladstone, a Judaic and Middle East Studies concentrator, explains that he had hoped to take advantage of the “activist potential” on campus when he started the group, which consists of about twenty students. The coalition has organized a variety of panel discussions and conducted regular phone conversations to urge local representatives to change Rhode Island’s refugee immigration quota. It has also raised money for the White Helmets, a Syrian volunteer organization that rescues wounded civilians.

But the learning process goes both ways. “We are teaching American kids about culture,” says Omar Bah, the director of the Dream Center. “You don’t have to go to the Middle East to learn about Syria.”

Trafimow notes that interacting with refugees at the Dream Center and through student panels provides a human face to a debate that often seems abstract in campus discussions.

“It’s easy for us to debate policy changes in elite institutions a thousand miles away from Syria,” she says. “But sometimes we need to put all our political agendas aside and just listen to the real humanitarian crisis going on. There are many faces to this story.”

Reader Responses to The Face of Syria