For anyone considering creating an app, Brendan Alper ’09 has some advice: don’t. He says this even after founding a viral venture himself—Hater, “the dating app that matches people based on the things they hate.” Even though Hater only launched in February, the app is up to 300,000 downloads and counting and has earned praise from such publications as the Washington Post and Business Insider. 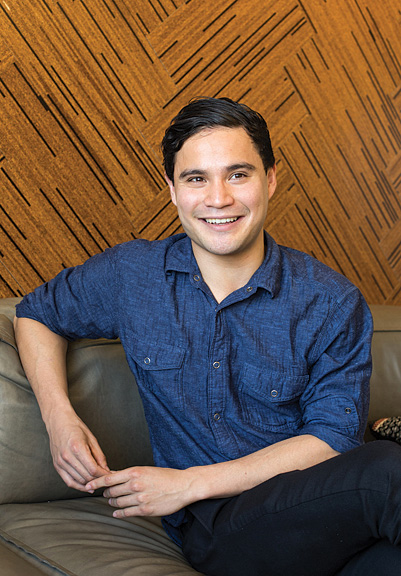 Unlike most existing apps, in which you browse people’s profiles, on Hater you swipe through topics instead. People with strong mutual dislikes are then connected. “It makes sense,” Alper explains. “People seem to come together around things they hate.” Among the most popular hated subjects are the recent presidential election, bathtub-drain hair, and bad sidewalk etiquette.

It should be noted that the app has some haters of its own—although that’s probably not a bad thing, considering the press that’s come with it. Most recently, Alper received a handful of Facebook “death threats” after the company projected images of Russian President Vladimir Putin caressing a pregnant Donald Trump in various New York City locations. The images were accompanied by the brand’s hashtag, #lovethroughhate. It was perfectly engineered to go viral—which it did.

Despite Hater’s buzz, its road to launch was a rocky one. As an ex-banker, Alper knew almost nothing about app development when he started in August 2015. “I made every mistake that you can possibly make. A dating app is the prime example of an app you shouldn’t start,” Alper jokes. He discovered that even the most basic of apps can run upwards of $100,000. “We had some investors, and we paid like $15,000 or $20,000 [to developers]. They made a big mess of it.”

His advice is find a business idea that doesn’t involve creating an app. “I even think apps are going to be dead in a few years,” Alper says. Until then, he admits that Hater has got to be an app. People are looking to meet other people when they’re out with their friends or just spending time in line, so mobility and real-time location are key to any dating platform.

Despite the early obstacles, Hater has found solid footing in the highly saturated app market. The challenge for Alper and his team, now, of course, is to sustain it. “We’re far from out of the woods,” he says. On the upside, he adds, “Things [have gone] well beyond our wildest expectations.”