During his first year at Brown, Nifemi Madarikan was a spoken-word poet who planned to become an engineer. Then he took Computer Science 15, an introductory computer programming course. There he saw his ideas and the letters he typed on the keyboard transformed into something that had form. “It feels like you’re breathing life into your own words in a really tangible way,” Madarikan says. He was hooked. 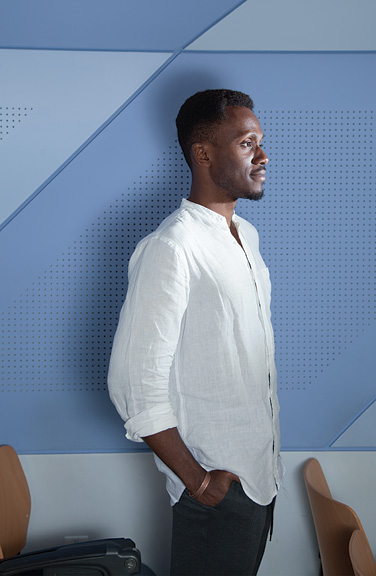 But he was struggling with his grades. Madarikan had always done well, both in high school in his native Nigeria and in the elite United World College program he’d attended in Duino, Italy. But his schools hadn’t prepared him for CS, Madarikan says. Also, as a black student in a classroom full of white people who all seemed to share a sense of community, he felt like an outsider: “I immediately thought, ‘I’m not good enough for this, and these other people were made for this.’”

Then Associate Professor of Computer Science Chad Jenkins, at the time the only black professor in the department, became his faculty adviser. Jenkins invited him to work in his robotics research lab. “I felt terribly underqualified,” Madarikan says. But he also started to feel as if there might be a place for him in computer science. That summer, he spent his free time in Jenkins’s lab and then, thanks to a Karen T. Romer Undergraduate Teaching and Research Award, became an official part of the team.

“Towards the end of sophomore year,” Madarikan remembers, “Chad approached me with the idea of creating more of a community for underrepresented minorities in the department.” Madarikan pulled a group together just as Jenkins left Brown for an associate professorship at the University of Michigan. Undeterred, Madarikan pushed forward, determined to find a way to make other students of color feel as welcomed in computer science as Jenkins had made him feel.

The founding members of the group identified the main challenges. One was experience: students of color often come from underfunded high schools that don’t offer computer training. Another was community: in CS classes, many students of color found themselves solo in a class of sixty white students, Madarikan says. “Sometimes a teaching assistant would ask, ‘Oh, are you lost? Are you looking for something?’”

Madarikan and his fellow students named the group Mosaic+ and created two main initiatives: an intensive weeklong pre-orientation program for incoming first-year minority students interested in technology, and a workshop series during the semester with such topics as “preparing for an internship interview” and “gentrification in Silicon Valley.” Mosaic+ also set up a peer mentoring  and tutoring program. In addition, the group has reached out to such alumni of color as software engineer Parielle Lacy ’15, who led a tour of Google’s offices in Cambridge, Massachusetts.

“Anything less than a holistic, involved solution didn’t really seem to make sense,” Madarikan says of Mosaic+’s approach. “Occasional pizza meetings are not going to solve the problem of diversity in an academic department.”

Madarikan, who also works as a teaching assistant for both CS and West African dance, says his summer internships at Goldman Sachs and Microsoft helped him understand how to grow the student organization. “It’s identifying a problem,” he explains, “taking first steps to solve it, reassessing the situation, and then iteratively repeating that process until you get closer to a real solution. We’re still refactoring our ideas to accommodate new developments.”

He’s also refactored his career plans. If he can get a visa to work in the United States, he says, he will move to Seattle to take a job with Microsoft as a project manager. His experience with Mosaic+ has taught him that he likes creative problem-solving and managing teams: “I’m really looking forward to just going in and building.”

Reader Responses to The Problem-Solver