Even a soaking rain couldn’t dampen the spirits of the more than 700 alumnae who returned to campus in early May to celebrate 125 years of women at Brown. Graduates from classes ranging from the 1940s through 2016 attended panel discussions, keynote speeches, performances, and even a flash mob dance on the College Green, all to honor the past and help one another seize opportunities in the today. 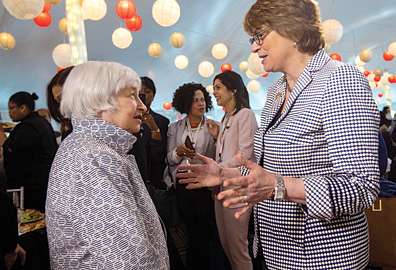 Janet Yellen '67 chats with fellow economist President Christina Paxson during the celebration in early May.
“You can’t give up. You have to lean into it,” Pulitzer Prize–winning playwright Lynn Nottage ’86 urged during the two-day event. “Every year I do some-thing that really, really terrifies me.”

Jimmy Kimmel Live! writer Bess Kalb ’10 said she broke into the male-dominated field of late-night comedy after an influential woman in the business invited her to Los Angeles and put her up on her couch. “Girls got to give girls a chance,” Kalb said. “Don’t climb the ladder and pull it up behind you.”

New York City–based independent investor Lorine Pendleton ’91 advised, “If you build your own house, you don’t have to worry about a glass ceiling.” Planned Parenthood president Cecile Richards ’80, who joked that she “minored in activism” at Brown, noted that “women never get anything they haven’t fought for,” and Grammy Award–winning singer-songwriter Mary Chapin Carpenter ’81 sang: “Everything we got, we got the hard way.”

The highlight came in a keynote address by Fed chair Janet Yellen ’67 titled “So We All Can Succeed: 125 Years of Women’s Participation in the Economy.” In it she provided a brief history of the successes and difficulties of women in the workplace since 1891 and assessed the status of working women today. Yellen, who, as President Christina Paxson noted in her introduction, switched from philosophy to economics at Brown—“She really epitomizes what many Brown students do. They come in thinking they are going to do one thing and then they do something else”—described the history of women over the past 125 years as one of “slow but steady progress,” though it was often, and wrongly, “seen as coming at the expense of men.” 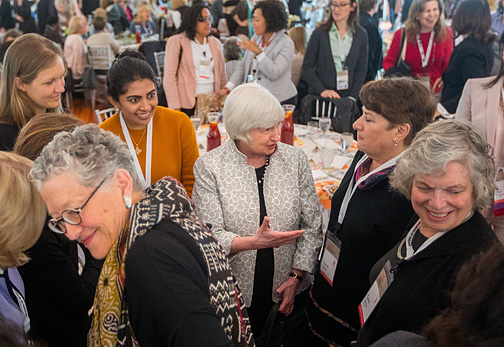 When it came to celebrating the success of Brown alumnae, Yellen at times seemed just one of the crowd.
“The evidence,” Yellen said, “shows that the rise in women’s participation has contributed to widespread improvements in the safety and productivity of our workplaces, to the health of families, and to the macroeconomic success that our country has enjoyed over the past 125 years.” In fact, she added, “Since 1979, women have accounted for a majority of the rise in real household income.”

Yet the data, Yellen said, suggest we may be moving backward again. “The participation rate for prime working-age women [in the economy] peaked in the late 1990s and currently stands at about 75 percent. Although men have also suffered from the economic changes of the past 20 years, their participation rate stands at more than 88 percent. And, she noted, “women working full time still earn about 17 percent less than men, on average, every week.”

And it’s not just women who suffer. “One recent study,” Yellen said, “estimates that increasing the female participation rate to that of men would raise our gross domestic product by 5 percent.”

Yellen concluded that, just as Brown helped her get started, it continues to play an important role “by educating many thousands of women over the decades, and by continuing to be a place that equips men and women with the means to make our nation and the world a better place.”