“Gentleman in the baseball cap there!” Brown physics professor Stephon Alexander ’00 PhD, who was standing before a screen of MC Rakim lyrics, called to a late-middle-aged white man two-thirds of the way up in the Friedman auditorium. “I want you to drop this rhyme.” 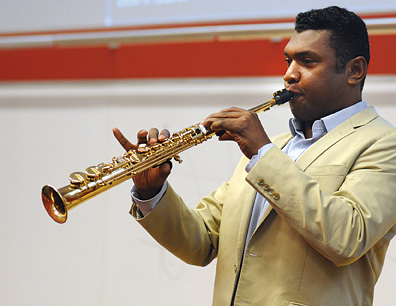 Not your average physics lecture, but Alexander, a jazz saxophonist, is not your average physicist. Growing up a black kid in the Bronx, Alexander said, “I was very much looking for role models that vindicated my inner scientist.” He found it in rap music, he said, especially that of Rakim, who was interested in science. Conversely, Einstein, whom Alexander first discovered in a comic book during high school detention, was deeply interested in music. Alexander wound up earning two master’s degrees, one in music and one in science, and a Brown doctorate in physics. Along the way he jammed in the Providence downtown jazz scene, two worlds, he said, “sociologically very different.”

While a post-doc at London’s Imperial College rubbing elbows with physics enthusiast Brian Eno, he found that music and physics were more closely related than he’d thought, going all the way back to Pythagoras’s “harmony of the spheres.” Music’s formal structure, Alexander says, inspired seventeenth-century astronomer Johannes Kepler’s Laws of Motion, and Einstein was an influence on John Coltrane.

At the forum, Alexander drew sound waves on a whiteboard, which, he said, are common to both physics and music. The complex arrangement of sound waves produced by music harmonies, he explained, is also found in the structure of the universe: understand music, and you can understand physics. “You already know the Fourier Transform,” he told the audience, referring to an important concept in physics and math. “You know do, re, mi, fa, so, la, ti, do; you saw the Sound of Music as a kid.”

At this point in the lecture, Alexander’s friend Marx Njoroge ’99 handed Alexander his saxophone, and the professor played a few cosmic jazz riffs. To understand the physics of how the universe is organized, Alexander claimed, “the best and truest route is to understand how [musical] instruments work.”

And for those listeners still puzzled, Alexander took time afterward to sign copies of his 2016 book, The Jazz of Physics, which, he assured them, would explain it all in much greater depth.

Five minutes with Cat Buthod ’20, on her current obsession
Education