"How many people in this audience have seen The Martian?" asked Maria Zuber ’83 ScM, ’86 PhD, a former NASA research scientist who is a professor of geophysics and the vice president of research at MIT, as well as the first woman to lead a science department there. 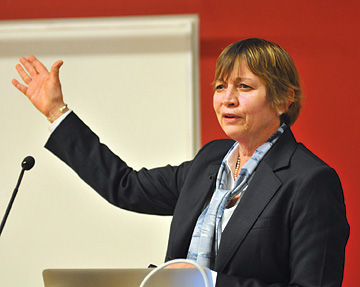 Frank Mullin
Maria Zuber '83 says getting to Mars is not an if but a when.

“It’s probably about one of the best scientifically grounded movies that you’ll ever see.”

“A Human Expedition to Mars” was the topic of Zuber’s Maurice and Yetta Glicksman Alumni Forum during Commencement weekend (tragically, former provost Maurice Glicksman had died the night before). Zuber offered sometimes surprising insights into our ambition to send humans to the Red Planet, whose dusty atmosphere, she says, produces pink skies and blue sunsets.

“Landing on Mars is the most difficult thing we do in planetary science,” she said. A failed human mission, with loss of life, could set the space program back indefinitely. Yet there are decided advantages to sending humans. “As someone who has made a career in robotic space exploration,” Zuber said, “what I can tell you is that science will never be the driving consideration for sending humans to Mars. When we send humans to Mars, they will do science, and it will be really interesting science. But we have not yet gotten to where we couldn’t design a robot that will considerably advance our knowledge in terms of the scientific measurements they make.”

Still, she continued, “Humans can notice things that robots sometimes can’t. The discovery of green glass on the Moon is an excellent example of a trained astronaut who saw something really important that a rover wouldn’t observe. One thing I can tell you that a human would be able to do but a robot wouldn’t … is that, if life found a refuge deep beneath the surface … you would need to drill … in order to be able to find it. That drilling couldn’t be done by robots. It could be done by humans.”

Reader Responses to The Final Frontier