Paolo dePadova and his cousin Giorgio always got into mischief while growing up: sneaking off to the next village to dance all night, say, or hitchhiking to the beach without telling anyone. But the mischief Giorgio proposes as an adult in The Delight of Being Ordinary, the new novel by Roland Merullo ’75, ’76 AM, is on an entirely different scale. 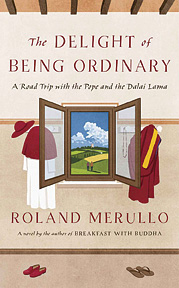 Giorgio grows up to become the Pope, and Paolo his First Assistant. One day, while the Dalai Lama is at the Vatican for an official visit, the Pope asks his cousin to make arrangements for him and the Buddhist leader to “take an unofficial vacation,” a road trip without bodyguards or photographers or Vatican officials.

“We desire only to be normal for a while,” he says. “Ordinary men.”

From this absurdist premise emerges a story that explores the gifts—and burdens—of being ordinary through the lens of a crew that is anything but. It’s also a fun, smart road-trip novel layered with history and populated by deftly sketched relationships and characters.

Paolo is a neurotic worrier who wishes he had turned out more like the bohemian artist parents who raised him on the shores of Lake Como. To help disguise the holy men, he loops in his ex-wife, a hot-blooded Neapolitan who runs a chain of beauty salons catering to the stars. Paolo and Rosa never stopped loving each other, even as their relationship strained and eventually broke. “Old love, it was,” Paolo reflects. “Scarred and imperfect and fine.” The Pope and the Dalai Lama both emerge as real people, with an above-average amount of forbearance, to be sure, but also with foibles, naïveté, and a childlike giddiness when presented with the opportunity to kick a soccer ball or eat a roadside picnic unmolested.

Paolo may be too set in his ways to question the Catholic faith he was raised with, but Rosa isn’t, and neither is their adult daughter, whom the foursome visits along the way. Both the Pope and the Dalai Lama welcome questions and doubts, and the quartet’s searching conversations and spiritual quest—driven by the holy men’s visions and dreams—become a metaphor for faith itself, in which the searching is its own kind of answer.

Merullo has made a career out of novels that explore religious faith in entirely unexpected settings, and road trips are a recurring theme. He’s best known for his 2008 novel, Breakfast with Buddha, about a New York City publishing executive who reluctantly hosts his sister’s guru on a drive to the Midwest. He followed that up with Lunch with Buddha (2012) and Dinner with Buddha (2015). American Savior (2008) imagines Jesus running for president and Golfing with God (2005) creates an afterlife in which God needs some help brushing up on her swing.

But Merullo has also penned memoirs, essays, and realistic fiction in a gritty American tradition. His Revere Beach trilogy, set in his working class Massachusetts hometown, has won praise for its ordinary characters and, according to Kirkus, “sentiment without sentimentality.”  All these elements shine in The Delight of Being Ordinary, including a deep familiarity with, and obvious affection for, Italy, Catholicism, Buddhism, and the imperfect humans who populate all three.