In the dimly lit room of Sabin’s Tavern on June 9, 1772, Providence merchant John Brown gathers a motley group of men and boys and prepares to lay out what will become the most infamous plan in Rhode Island history. With the Boston Tea Party still over a year away, Brown convinces his fellow colonists to row up the Providence River with him to attack and burn the H.M.S. Gaspee. Earlier in the afternoon, the Gaspee—a customs schooner whose captain had a long history of harassing local merchants—had run aground on a sandbar while chasing down the packet ship Hannah. 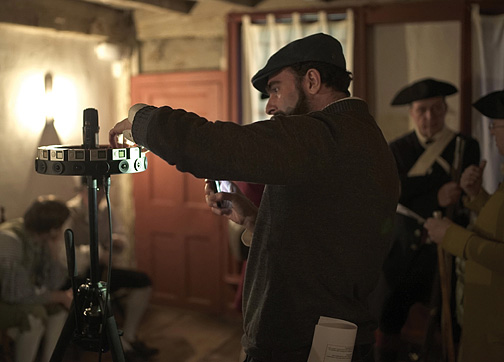 As the rebellious colonists sip pints of ale for liquid courage, there is an unlikely eavesdropper in their midst. Adam Hersko-Ronatas ’18 crouches hidden behind the bar, holding a wireless mic and making sure the audio from John Brown and the others is being properly recorded.

Welcome to the intersection of history and virtual reality. Hersko-Ronatas is one of fourteen students working on a virtual reality project to re-create what’s known as the Gaspee Affair. The Rhode Island colonists, with their muskets, tricorner hats, and stockings, are actually a combination of students and re-enactors, and the tavern is Buckman’s in Lexington, Massachusetts. In the center of the room stands a tripod holding a JUMP camera—a circle of sixteen synchronized GoPros that capture 360-degree video footage.

Under the supervision of the Granoff Center’s VR artist-in-residence, Adam Blumenthal, and thanks to Google, which is lending the equipment,

Hersko-Ronatas and his collaborators are researching, developing, and combining various virtual reality techniques—from 360 video to such computer animated graphics as Tiltbrush—to test their effectiveness for educational scenarios. As Blumenthal explains, “The [Gaspee] project is a computer-science project also using art and design and history to apply the most advanced twenty-first-century storytelling technology to an eighteenth-century story.”

The goal, he adds, is to produce something that will capture the attention of high school students: “We want to address the problem of student disengagement in the classroom by creating compelling content that also allows students to learn effectively.” 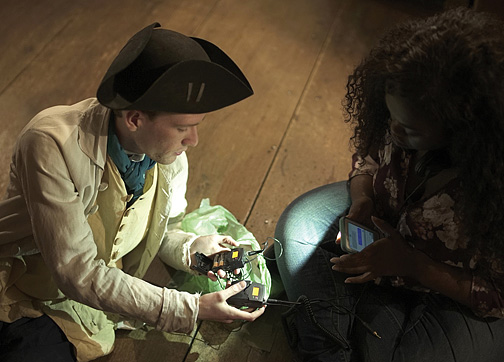 Errol Danehy ’18 and Ashley Washington ’17 combine old culture with new technology.
he students, employing what game designers call a “hub-spoke model,” created a virtual museum centered on a hub—a room that includes artifacts, paintings, and other animated and digitally reconstructed objects. By putting on a special headset, a viewer can not only walk around the environment but pick up and interact with different objects.

From the hub, the viewer can then experience different “spokes,” which constitute the chronological parts of the Gaspee story: the planning, the burning of the ship, and sequences from the aftermath, when colonists faced the wrath of King George III and interrogation by a sinister Royal Commission. (Spoiler alert: no colonists were ever arrested.) Students spent last spring semester working on the project as part of a group independent study project. They partnered with the Newport and Rhode Island historical societies to shoot in locations like the Old Colony House and the Newport mansions, while working with state archives to dig up primary source documents.

Blumenthal says he hopes to see Brown continue to develop its VR production capabilities and provide a space for more projects like this in the future, and, he says, Google has offered to continue supplying Brown with VR-related products to test. But, he stresses, the project was the brainchild of the students, not Google.

“I loved all the ideas that students had, how clever and creative and smart they are, all coming from different concentrations and backgrounds,” Blumenthal says. “It was exciting for me to introduce them to a very Rhode Island story, and everyone got really into the subject matter and the technology.”

For more information visit the group’s blog at blogs.brown.edu/gaspee