As a teenage percussionist in the San Francisco Symphony Youth Orchestra, Vinay Parameswaran ’09 had a great vantage point. “Being in the back of the orchestra gave me an opportunity to listen to what was going on around me,” he says. “I fell in love with all the colors, all the nuances and textures, and I found it inspirational to watch our conductors work, shaping the sound.” That experience spurred Parameswaran’s interest in becoming a conductor, a career path that takes a major step forward this fall with his appointment as assistant conductor of the Cleveland Orchestra and music director of the Cleveland Orchestra Youth Orchestra. 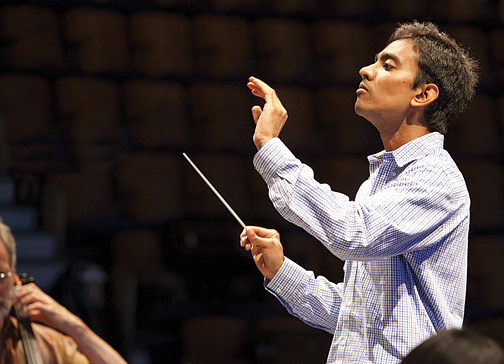 Parameswaran knew he would be involved in music at Brown, but he also wanted a strong liberal-arts education. That led to an unusual double concentration in music and political science, which he completed with honors. His musical ability was immediately recognized by Paul Phillips, director of orchestras and chamber music, who became his mentor.

“Vinay’s great talent was apparent as soon as he arrived,” Phillips says. “After I heard him audition as a timpanist and percussionist when he was a freshman, I told my colleagues at the next music faculty meeting that there was a new student who, I believed, would achieve an international career in music.”

Parameswaran is grateful to Phillips for accepting him as a private student, teaching him the fundamentals of conducting, and allowing him to lead the student orchestra in rehearsals. Phillips also encouraged him to enter the orchestra’s annual concerto competition, which he won twice—once as a timpanist and again as a pianist. During Parameswaran’s senior year, Phillips counseled him on graduate studies. “Paul was with me every step of the way,” says Parameswaran. “He had a good sense of what would be the right fit for me, and he helped me get ready for the auditions. I couldn’t have done it without him.”

The “right fit” turned out to be the Curtis Institute of Music in Philadelphia, where Parameswaran studied with renowned conductor Otto-Werner Mueller. After four years at Curtis, where he conducted both orchestral works and operas, Parameswaran was named associate conductor of the Nashville Symphony. He says he greatly enjoyed Nashville’s vibrant music scene—but the opportunity in Ohio was simply too good to pass up.

“It’s the perfect progression for me to move along to Cleveland and have music-director responsibilities with the Youth Orchestra,” he says. Over the summer, he served as a conducting fellow at Tanglewood, another acknowledgment of his outstanding ability with a baton.

The Cleveland appointment closes a circle for Parameswaran, who fondly recalls his days in the San Francisco Symphony Youth Orchestra. “Those years were so formative for me,” he says. “I didn’t know yet that I wanted to be a conductor, but I wanted classical music to be a big part of my life. I recognized how important it is to keep this musical tradition alive, and I wanted to contribute to its appreciation.”