A Witness to Suffering

Suzanne Nolan ’73 has watched a surgeon reach into the chest of a gunshot victim to massage his heart back into action. She has prayed with mothers who have lost premature babies. She has ministered to victims of strokes and heart attacks, and to patients battling cancer, multiple sclerosis, and Crohn’s disease. 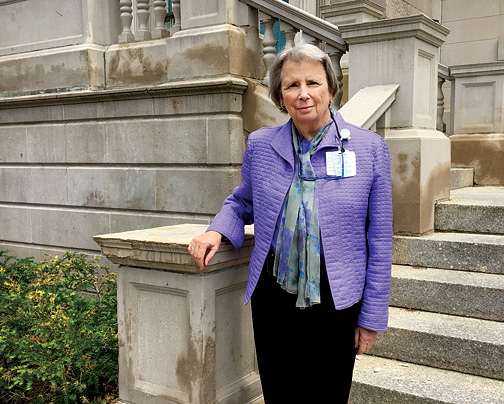 Nolan is the director of spiritual care at St. Francis Hospital and Medical Center in Hartford, Connecticut. When she is the chaplain on call, she wears a “trauma beeper” to summon her to the emergency department. After years on the job, she’s comfortable around human suffering. “It doesn’t frighten me,” she says.

A psychology concentrator at Brown, she made history as a senior orator at the 1973 Commencement, the first at which both orators were women. After graduating, she worked in admission, taught English, and coached athletes at prep schools in Connecticut. But as her twenties wound down, she felt called toward religious work. She had grown up in what she describes as an “observant but open-minded Catholic household” and as a young teen toyed with the idea of becoming a nun.

Instead, she eventually worked as a Catholic layperson in parish ministry and spiritual care. Then, while studying at Fordham’s Graduate School of Religion and Religious Education in the mid-1980s, she was diagnosed with leukemia. She recovered, thanks to a bone marrow transplant from her brother David ’71, but remains on a kidney donation list. (Find out more about her donor search at nolansuzanne.com ).

Nolan’s leukemia experience has special relevance to her work. “I know the territory,” she says. And on a recent afternoon she seemed perfectly at ease roaming the labyrinthine halls of the hospital, the patients on gurneys and in wheelchairs, the bright lights and beeping machines of the emergency department. Nolan has worked at St. Francis, which claims to be the largest Catholic hospital in New England, for more than a decade now. And though she manages a staff of a dozen people, including chaplains, volunteers, and chaplaincy students, she still thinks of herself primarily as a chaplain whose job is to connect with patients and, whenever possible, talk to them about meaning and purpose.

When first talking to a patient, she does not carry a Bible or other religious artifacts. “I just like to go in unencumbered and open to what’s going to unfold,” she says. She’s also careful to strike a balance between asking questions and sitting in silence. Describing her job, Nolan quotes a mentor who told her about “getting in the boat” with the person.

And Nolan has been in many boats. She recalls the patient with cancer in his neck who could barely talk but rasped out his gratitude to her after a visit and a prayer. When another patient talked about how tired she was, how much she was struggling with her illness and keeping her household in order, Nolan gently responded that it sounded to her like the woman was describing being ready to die. The comment was met with agreement—and relief.

A chaplain has the opportunity to hear and respond to things people don’t normally say, even to their own family members, Nolan explains. “It’s an incredible opportunity to get that real with people,” she says.

Reader Responses to A Witness to Suffering