As executive director of BronxConnect, a New York City–based nonprofit that helps at-risk teens, Rev. Wendy Calderon-Payne ’89 has a simple mantra: “He who has two tunics, let him give to him who has none; and he who has food, let him do likewise.” The quote is from the Gospel of Saint Luke, and when she came across the verse one day during her freshman year at Brown, it struck a deep chord. “Jesus’s solution to poverty just made sense to me,” she says. “We have to act when we see injustice or need.” 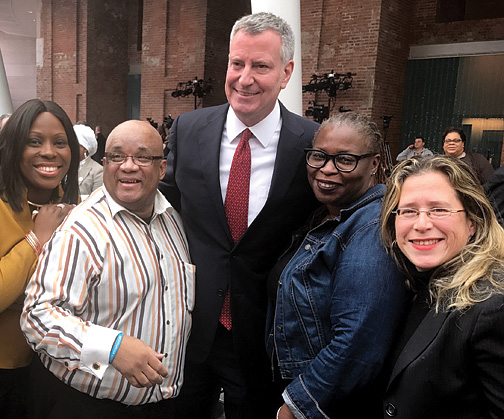 After graduating from Brown with a Latin American studies concentration, Calderon-Payne joined Urban Youth Alliance International (UYAI), a cross-denominational ministry located in the Bronx. Approached by the national Faith-Based Initiative, which gives federal funds to religious institutions that provide social services, UYAI launched BronxConnect in 1999. It pairs mentors from community churches with young boys and girls between twelve and eighteen who have entered the Bronx juvenile or criminal justice system, including teens who have been released from Rikers Island, the city’s main—and notoriously brutal—jail complex. (New York and North Carolina are the only states that prosecute as adults all children who are sixteen and older and charged with a crime.)

BronxConnect casts a wide safety net to prevent recidivism. In addition to mentors who provide case-by-case management of at-risk teens for up to a year, the organization offers everything from tutoring and after-school activities to an employment readiness program that matches participants to community service projects and helps them prepare résumés. Calderon-Payne oversees a staff of thirty, including ex-offenders and so-called “violence interrupters” trained to intervene in conflicts before guns are fired. “It’s our belief that people who have been through the system are best able to speak to youth who are still in the system,” she says.

Calderon-Payne also believes in tough love. “We’ve got to be firm with these kids,” she insists, “demanding excellence and reminding them that they can do anything they put their minds to. At the same time, I’m somewhat of a mother bear. BronxConnect fights for these kids in court as if they were our flesh and blood.”

The results have been impressive. While the twelve-month recidivism rate is 76 percent in the detention facilities where BronxConnect is active, the rate among the 2,000 young people active in BronxConnect programs is just 17 percent.

Calderon-Payne has been an advocate for closing Rikers, which she calls a “torture island and a destroyer of black and Latino men and women.” She would also like to see the Bronx-based Horizon Complex juvenile holding center turned into a secure campus that would be modeled after the Scandinavian open prison concept, where prisoners can keep their jobs on the outside while serving time, commuting to the facility daily. “It’s a project that could really change the lives and circumstances of Bronx juveniles and their community,” she says.

As for transforming lives, Calderon-Payne cherishes one success story in particular. “My fondest memory is of a young man who came back to say thank you and check in on us,” she says. “He was living in Providence and wanted us to know he had a job as a mechanic and was doing okay. What’s especially meaningful is that the he was one of our hardest kids, who cursed out and physically threatened the staffer he worked with. Our job is to help them realize the greatness within them.”