Finally, Cole Bolton ’04 thought, one of his ideas had made it into print. He had been submitting headlines to the Onion for six months before he finally saw one published: “NASA Announces Plans to Launch $700 Million into Outer Space.” 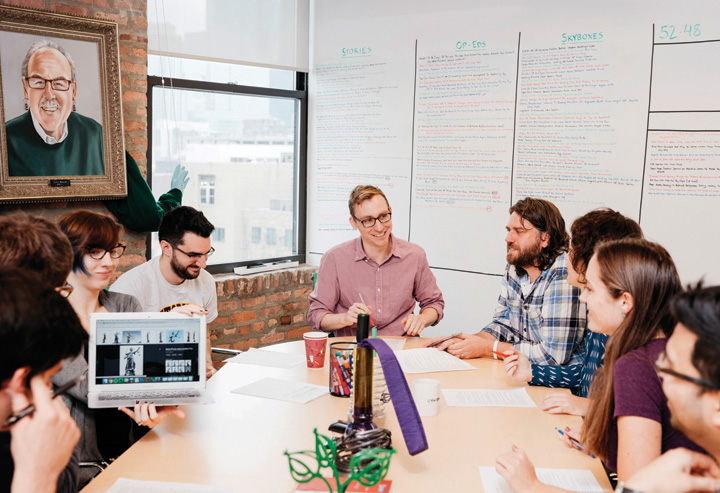 David Kasnic
Cole Bolton '04 rose through the ranks to become editor-in-chief of The Onion.

But when he contacted the satirical newspaper, Bolton discovered that the editors had never read his pitch. Somehow, he’d managed to formulate exactly the same headline as an existing contributor—a coincidence that wound up earning him a contributing position of his own.

More than a decade later, Bolton had not only risen through the ranks to become the editor-in-chief of what is now an online news site (a role he took on in 2014); he quit in October, reportedly in part over a disagreement with owners over editorial direction.

He is far from the only Brown alum in the writers’ room. The Onion and its sister site, Clickhole, boast a “shockingly high percentage” of Brunonians, Bolton notes, including Louisa Kellogg ’15, Lauren Moser ’13, Noah Prestwich ’14, and, until recently, Jamie Brew ’12—all of whom were groomed at Brown’s own satirical newspaper, The Brown Noser.

Bolton himself has no formal training in comedy. At Brown he studied business and economics—“the funniest of all concentrations,” he quips—and was “far too nervous” to audition for stand-up or improv. It took a post-grad job at the Federal Reserve Bank of Chicago with “a little too much downtime” for Bolton to start submitting satirical headline ideas to the Onion.

Every story at the Chicago-based website starts with a headline. The best ones, Bolton says, don’t usually get laughs. Instead, they strike a balance between truth and fiction. “Each joke is crafted to have an insight, whether it’s through hyperbole or misplaced focus or whatever,” he says. “So everything surrounding that has to be real and as true as possible for the joke to pop. Otherwise you get lost in this made-up world.”

That ethos extends beyond the headlines. To successfully parody real-life publications like the New York Times or the Washington Post, the Onion must be an astute observer of tone and style. “A big part of the job is to pay attention to the world of media and how are stories being broken, what form are they taking,” Bolton explains.

The staff noticed an uptick in leaked classified information, from the Panama Papers to WikiLeaks—a trend they satirized this summer with more than 700 pages of faked White House papers known as “The Trump Documents.” These include daily briefings adjusted to resemble coloring book activity pages and email correspondence in which the president requests that all of Air Force One be retrofitted with marble (even the seat belts).

None of these documents are genuine. Bolton says that his now former site, “We’re trying to use the tools of humor and parody to shed light on the world.”

Reader Responses to A Satirical Spotlight