Mike Makowsky ’13 is on Hollywood’s Black List, and that’s a good thing. The Black List, an anonymous annual survey of Hollywood executives, is viewed as a compendium of the year’s most compelling unproduced scripts. The 2016 list contained 71 screenplays; Makowsky was the only screenwriter with two. 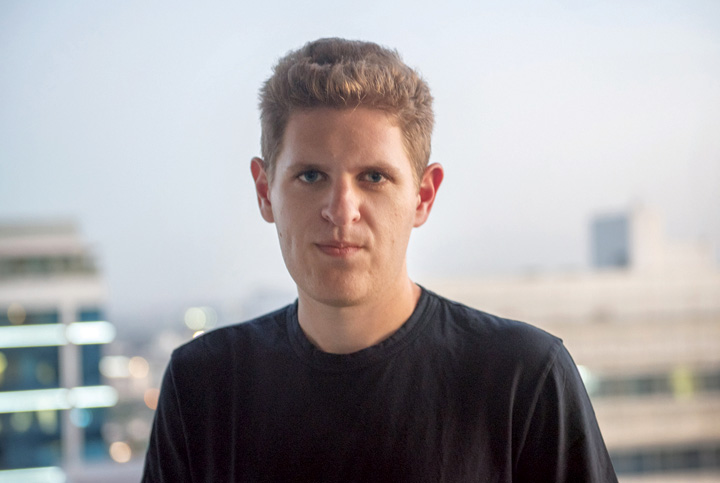 Rom Bokobza
Mike Makowsky ‘13 is both a Hollywood screenwriter and a producer.
“Back in college,” he says, “I tried to get my hands on as many Black List scripts as I could. This was a huge milestone for me.”

One of his 2016 scripts, I Think We’re Alone Now, was filmed in New York in April; starring Peter Dinklage and Elle Fanning, it’s scheduled for release sometime in 2018. The second, Bad Education, is a Makowsky screenplay, based on the school administration scandal in his Long Island hometown of Roslyn, that’s still in development.

The common denominator with both projects is Makowsky’s partner, Fred Berger, the producer of La La Land. Berger decided to collaborate with Makowsky after reading the script of I Think We’re Alone Now, which tells the post-apocalyptic tale of a loner who thinks he’s the last man on earth but has his solitude disrupted by a teenage girl who wants to befriend him. “Fred wanted to partner on it and mentor me,” says Makowksy, who moved to L.A. not long after graduation.

Makowsky’s first feature, a surrealistic comedy called Take Me, debuted on Netflix in July. He sold that script to Mark and Jay Duplass, known in Hollywood for producing top-quality low-budget films. That breakthrough came after he’d either written or produced five short films. Among his collaborators on these early projects were Travis Bogosian ’13, Henry Chaisson ’15, and Tess Carroll ’14.

“I didn’t know any producers or agents, so Take Me was the lowest-budget small movie I could conceive,” Makowsky recalls. “I was a 24-year-old writer who was unrepresented. Selling that script to the Duplass brothers opened so many doors.”

Though he’s also credited as a producer for I Think We’re Alone Now and Bad Education, he sees himself primarily as a writer. “Writing scripts is my bread and butter,” he says. “That’s what makes me happy: telling stories.”

Now, just four years after he left Providence, his stories are reaching a broader audience. Fred Berger believes I Think We’re Alone Now is only the start: “Mike is not seduced by fancy names or fancy things. He is driven purely by doing good work and pushing the boundaries of storytelling. That makes him a lethal threat in this town.”

Reader Responses to The Player