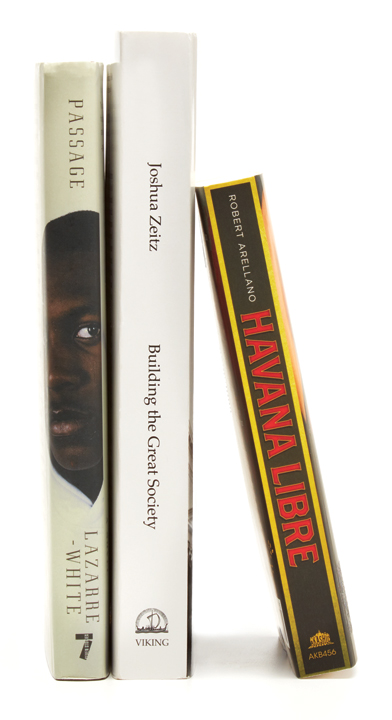 It’s Havana in 1997 and after the bombing of a nearby tourist hotel, 28-year-old Dr. Mano Rodriguez, a pediatrician running a family clinic for the poor, is recruited to take on an undercover mission to Miami, where he must learn what future plans the anti-Castro cell behind the explosion has in mind. The twist is that one of Dr. Rodriguez’s contacts there turns out to be the father he has never met. In his seventh novel, a noir sequel to Havana Lunar, which was nominated for an Edgar Award, Arellano skips between multiple points of view to create both a finely detailed tour of life in post-Soviet Cuba and a satisfying thriller.

Lyndon Johnson’s legislative legacy is vast: Medicaid, Medicare, NPR, PBS, consumer protections, voting rights, desegregation, and federal funding for schools. But he needed help. Zeitz, the author of Lincoln’s Boys and a contributing editor at Politico, details in crisp, vivid prose just how a group of young advocates on Johnson’s staff, including Jack Valenti, Bill Moyers, Joe Califano, and Harry McPherson, made sure that once the bills were passed the laws actually worked. A surprisingly compelling look at a crucial but often overlooked inner circle.

In this slim debut novel, Lazarre-White, an activist, attorney, and executive director of The Brotherhood/Sister Sol, a Harlem-based nonprofit, tells a survival story. Warrior, his 18-year-old hero, is a good kid—he’s in high school, he has two loving parents and a five-year-old sister he adores. But New York in 1993 is a tangled, dangerous world for an African American man. And as Warrior walks the snow-bound streets of Brooklyn and Harlem he must deal with the police, the gangs, his fears, and the weight of history as he winds his way from adolescence to adulthood.

Beginnings: How It Was by Mason Olds ’73 PhD (Inkwater)

Facing the Abyss: American Literature and Culture in the 1940s by George Hutchinson ’75 (Columbia)

The Case of the Sexy Jewess: Dance, Gender and Jewish Joke-work in US Pop Culture by Hannah Schwadron ’05 (Oxford)

When Love Was Reels by José B. González ’91 MAT (Arte Publico)

Why You Eat What You Eat: The Science Behind Our Relationship with Food by Rachel Herz (Norton)

The World in a Book by Elias Muhanna (Princeton)