Meet Dr. Microbe
Your microbiome—the bacteria, fungi, viruses, and parasites that live in your body—could save your life someday.

At this very moment, 100 trillion nonhuman but living cells are running rampant in your body, outnumbering your human cells by about 10 to 1. And you should be grateful. These microbes do important work carrying on such vital functions as synthesizing vitamins, metabolizing drugs, and detoxifying carcinogens. What if we could get them to do even more? What if they could also be harnessed to combat serious infections and treat diseases? 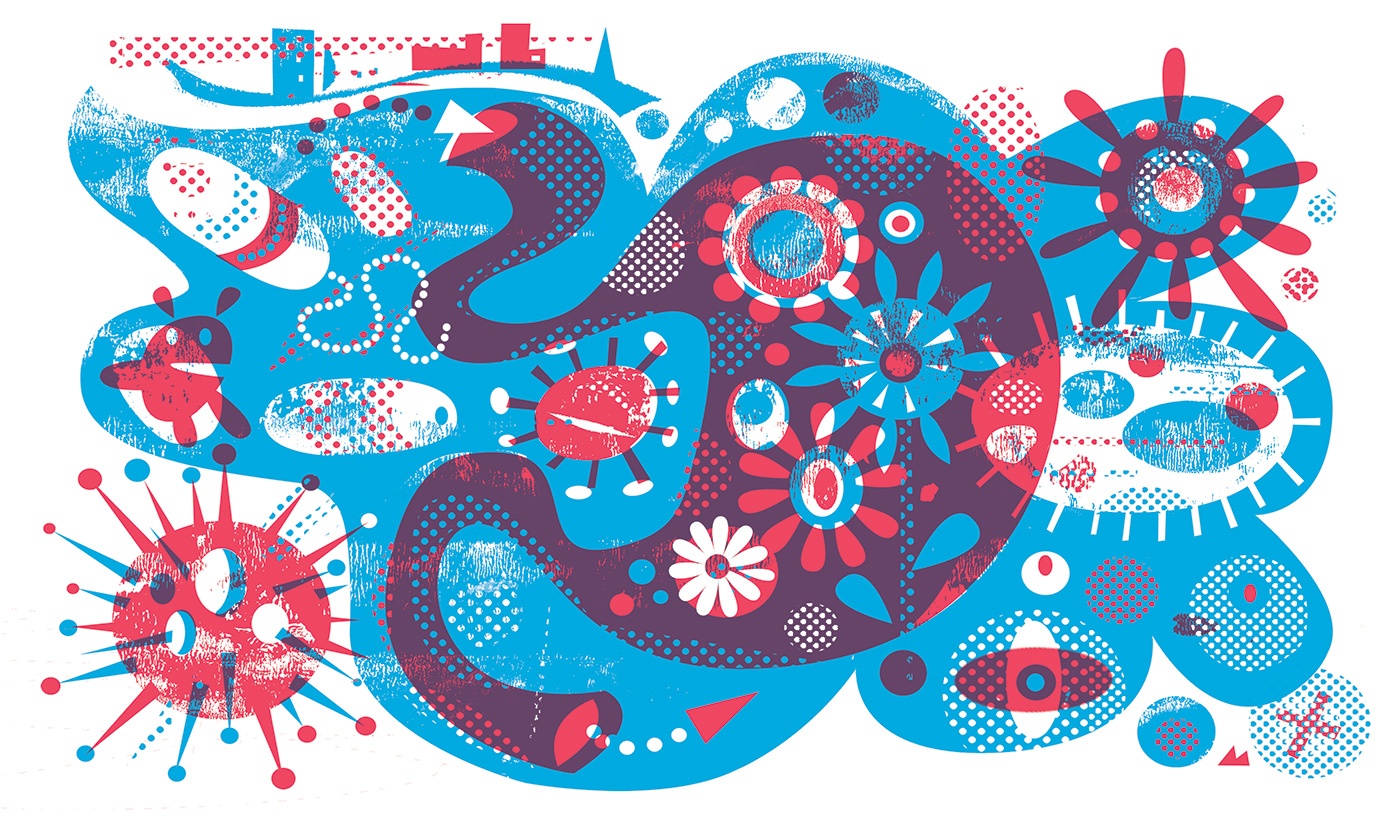 Bugs that Heal Your Gut

Sometimes antibiotics used to resolve infections can actually cause them. That’s the case with Clostridium difficile infections, which can crop up when antibiotic treatment inadvertently destroys the good bacteria that live in your gut. Treating it means yet another antibiotic, but overuse has rendered many of such medications ineffective (see “Resistance Fighters”). The result can range from nausea, severe stomach pain, and diarrhea all the way to  kidney failure.

Studies of the gut microbiome have led to a unique, highly effective treatment for C. diff infections by importing bacteria from a healthy person through a fecal transplant. The stool is placed in saline, strained, and brought in via colonoscopy or other procedure, hardly a pleasant treatment.

Gastroenterologist Colleen Kelly, an assistant professor of medicine at the Alpert Medical School who has been performing fecal transplants for the past decade, is working on a simpler, more accessible, and potentially more affordable treatment: a fecal transplant pill. Kelly tested two drugs that have shown promise in clinical trials.

“I think we’re only a couple of years away from being able to prescribe a fecal transplant pill,” Kelly says. “Any doctor could prescribe it.” By avoiding sedation and procedures that have their own risks, a pill would also be safer. “C. diff infections devastate people,” says Kelly. “It’s wonderful to be able to provide a treatment that helps them get their life back.” 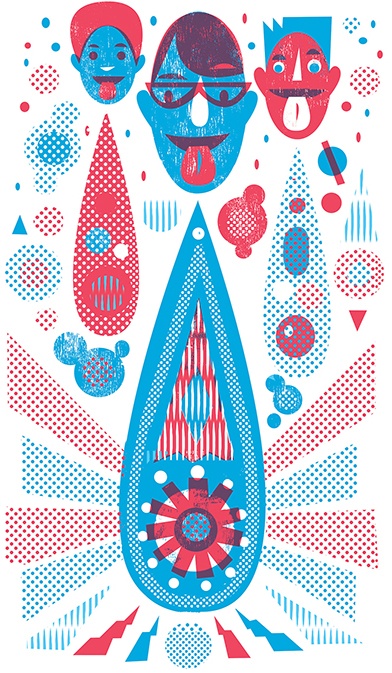 Illness: Common infections that require antibiotics.
Goal: A saliva test to check if an antibiotic is the right one.

Decades of misuse and overuse of antibiotics have enabled many types of bacteria to adapt to the drugs, leading to a global rise in harmful bugs that are difficult to treat and can become so-called superbugs. Ideally, new antibiotics would be under development to treat them, but in reality what’s coming onto the market are simply modifications of existing families of antibiotics, which provide only short-term solutions.

But what if doctors could use currently available antibiotics more effectively, and without contributing to resistance, by finding an easy and timely way to monitor their effect?

Peter Belenky, an assistant professor of molecular microbiology and immunology, believes we should be able to do that by tracking changes to the microbiome in the saliva of patients taking antibiotics. Reading saliva in this way, he says, could provide doctors with a fast, effective way to tweak treatment if they discover the current protocol is killing beneficial organisms.

Earlier research had shown that the “good” microbes in our saliva are much less sensitive than gut microbes to such things as dietary changes or hospitalization, which can wreak havoc in your gut. As Belenky and his team reported last fall in Nature, the salivary microbiome is dramatically affected by antibiotics—in this case, azithromycin.

“This was surprising considering that azithromycin isn’t a particularly aggressive antibiotic,” Belenky says.

Collecting a saliva sample is simple, and it also allows doctors to see shifts in the bacterial community right away. “You’d have to wait several hours for food to move through the gut to obtain a fecal sample,” Belenky says, “and by that point it may be too old to provide useful information.”

Doctors would now be able to respond more quickly to any changes and adjust treatment simply by analyzing saliva.” 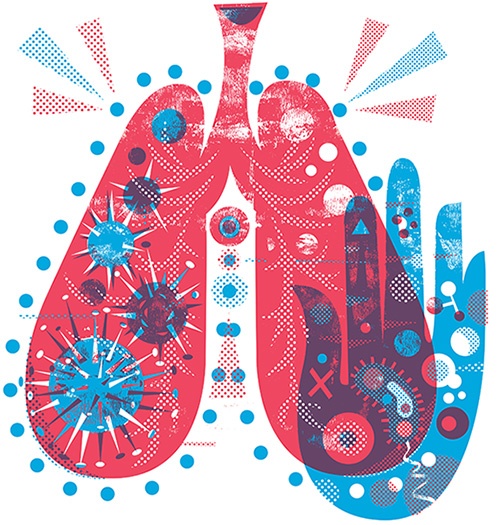 Bugs that Protect Your Lungs

Illness: Respiratory infections and diseases such as the flu and asthma.
Goal: Shield the lungs by adding the good bacteria that illness takes away.

Amanda Jamieson never planned to study the microbiome of the lungs. Why should she? Until recently, scientists didn’t think there was a lung microbiome, at least not in healthy people. For starters, their lungs lack the microbe-friendly mucosal lining found in the mouth and gut. And researchers also struggled to grow bacteria from lung tissue samples in culture. As a result, scientists assumed that, in the absence of infection or disease, lungs were sterile.

Jamieson, an assistant professor of molecular microbiology and immunology, has shown that there is a community of microbes in healthy lungs and that they shift in response to respiratory illnesses. In particular, Jamieson has studied the effect of influenza A virus infections on lung microbes, an illness that can cause an estimated 500,000 deaths every year.

Squeaky Clean
Shipra Vaishnava, an assistant professor of molecular microbiology and immunology, directs one of the few U.S. labs that house germ-free mice. Because they lack a microbiome, Vaishnava and her team can colonize the mice’s digestive systems with certain bacteria and study how those microbes impact such things as physiology and susceptibility to disease.

So far, she has shown that influenza A decreases the diversity of microbiota in the lung, which raises the question: what if doctors could add back the beneficial bacteria? The answer has far-reaching public-health implications, Jamieson says, because influenza damages lung tissue, making it vulnerable to bacterial infections, such as pneumonia, that are a main cause of death among flu patients. Replacing the helpful bacteria could make the lungs more resilient.

“That’s still many years away,” Jamieson says, “because we need to determine why the decrease occurs and why only specific types of bacteria are affected.”

But a growing interest in lung microbiome research makes her feel optimistic: “More scientists are focusing not just on how to clear infection but also on ways to help the lungs better tolerate the presence of infection as they heal.”

For those who struggle the most to fight the flu—primarily babies and the elderly—such discoveries could dramatically improve the odds of survival.