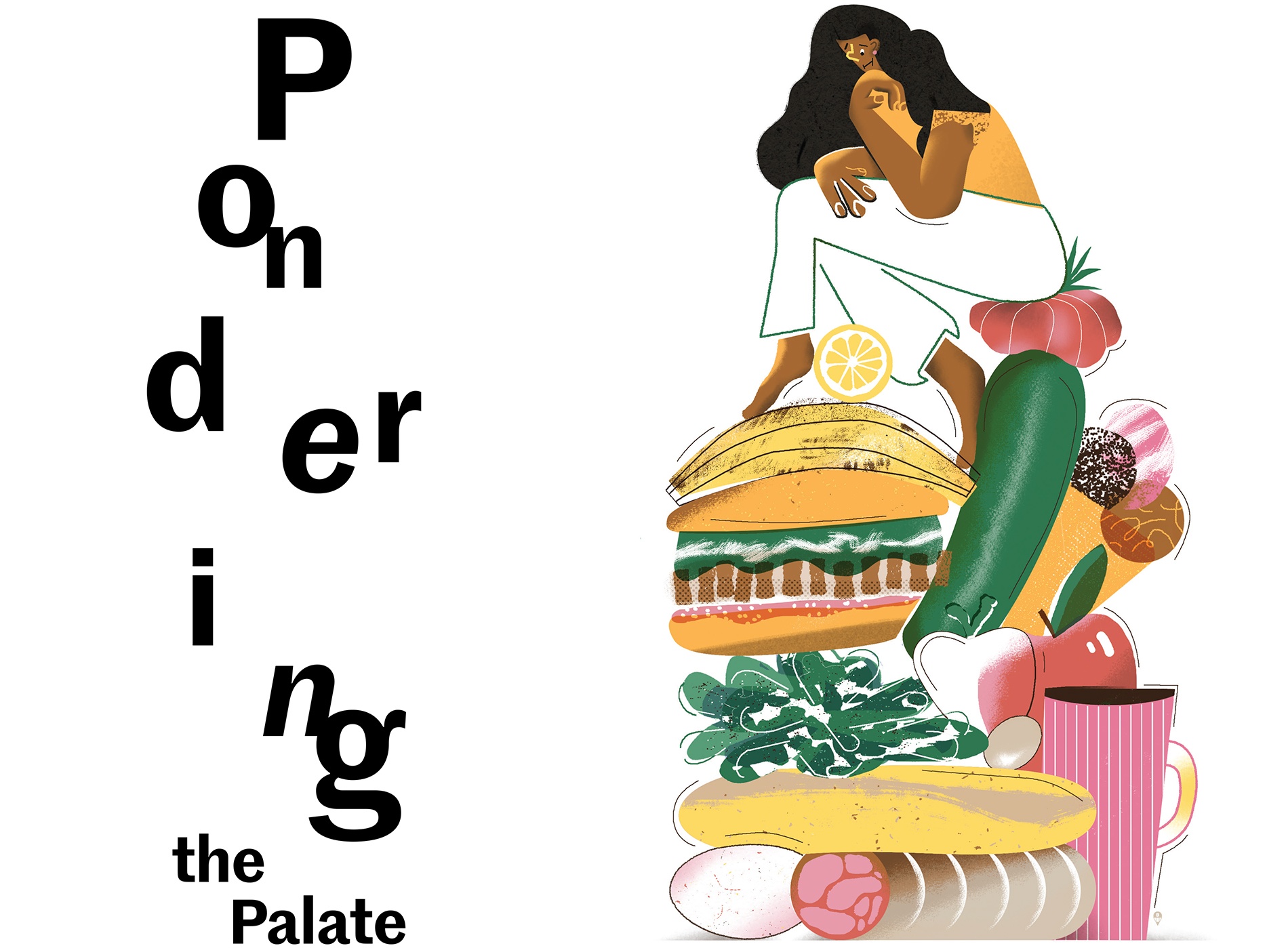 In Why You Eat What You Eat, Brown scientist Rachel Herz explores how everything from our environment to our mood impacts what goes on in our mouths.

Rachel Herz, an adjunct assistant professor in Brown’s Department of Psychiatry and Human Behavior, arrives at an East Greenwich, Rhode Island, café feeling stressed. She’d lost a document when her computer crashed and she isn’t sure how to retrieve it. “If I were an emotional eater, I’d be running to get a huge slice of cheesecake,” she says with a laugh.

We’re not eating, in fact. We’re just catching up over a coffee—Herz was my professor at Brown—to discuss her book Why You Eat What You Eat, published last year by Norton. (Disclosure: I blurbed it.) Yet if we were eating, Herz notes, we would not be in a good environment: the music’s too loud, the café too dark, and we’re competing with surrounding conversations, plus the hiss of the cappuccino machine. “We’re so bombarded,” she says.

But these stimuli—sights, sounds, smells, emotions—have a huge, often unnoticed, influence on how we experience the world. Particularly on food, how we taste it, and how it makes us feel. And that is exactly where her new book focuses: at that nexus between appetite and psychology. In its pages, she unpacks how (and why) all of our senses influence our experience of food and our motivations to eat. She investigates how our minds and our environment change our perception of flavor. And she also tackles the reverse: how our experience of food and eating changes our own physiology, mood, and behavior.

A researcher herself, Herz set out to analyze decades of research done by scientists around the world on these subjects in order to empower us. “I hope that with this book I’m giving readers the knowledge to have a greater understanding of—and greater control over—food,” says Herz, “rather than feel like food is controlling them.”

Raised in Montreal by two professor parents, Herz has written two other popular science books, The Scent of Desire (Harper Collins, 2007), on the psychology of smell, and That’s Disgusting (Norton, 2012), on the psychology of repulsion. Yet all the while, she says, food was on her mind. So she finally embarked on Why You Eat What You Eat. What follow are some of the book’s fascinating facts. 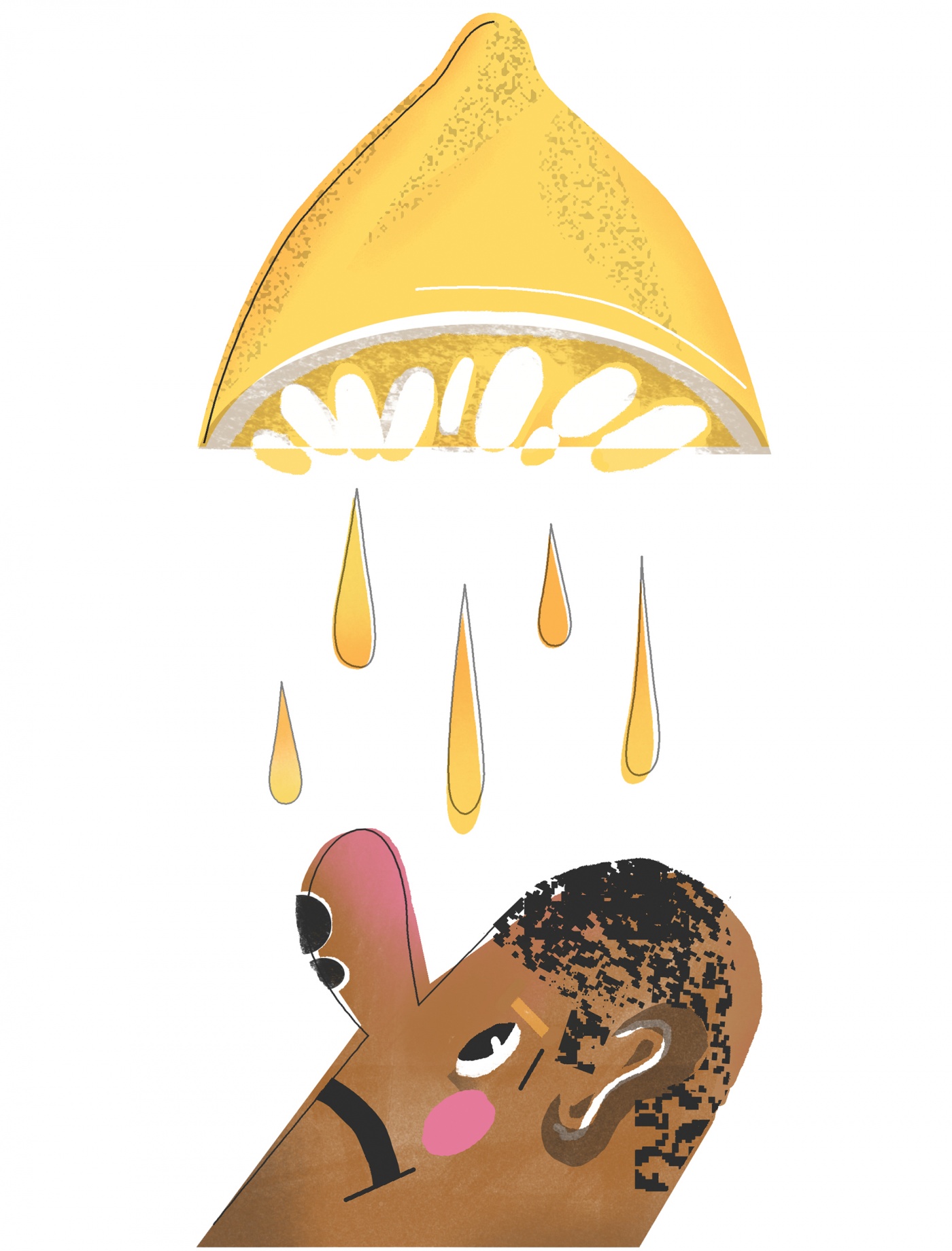 Your bad mood makes things taste sour.
Your perception of sourness is not constant—or, a lemon will not always taste so tart. What changes? Your mood. A 2015 study, published in the journal Appetite and conducted at Cornell University, surveyed Cornell hockey fans, asking how happy (or sad) they were after their team won (or lost), then had them taste a lemon-lime sorbet. The happiest fans rated the dessert as tasting sweeter and less sour. Why? When happy, you produce more of the feel-good neurotransmitter serotonin; when stressed, you produce the hormone noradrenaline. Serotonin will increase your perception of sweet, while noradrenaline increases that of sour.

Sweets may make you, well, sweeter.
In a 2012 study out of North Dakota State University and Gettysburg College, scientists found that eating sweets and being nicer were highly correlated. First, they confirmed that this is something many people believe: “Strangers who were described as liking honey were rated as friendlier, more cooperative, and more compassionate than strangers who were described as liking grapefruit, lemons, pretzels, or hot peppers—that is, bitter, sour, salty, and spicy tastes,” says Herz. Another study found that after just a brief taste of sweet chocolate (opposed to a cracker or no food at all), people said that they felt more agreeable. “Eating the taste of sweet is something highly hedonically rewarding,” explains Herz. “It turns on the bliss points in the brain.” If you’ve got a stressful meeting, she suggests, bring donuts for the group. It’ll put everyone in the right mood. 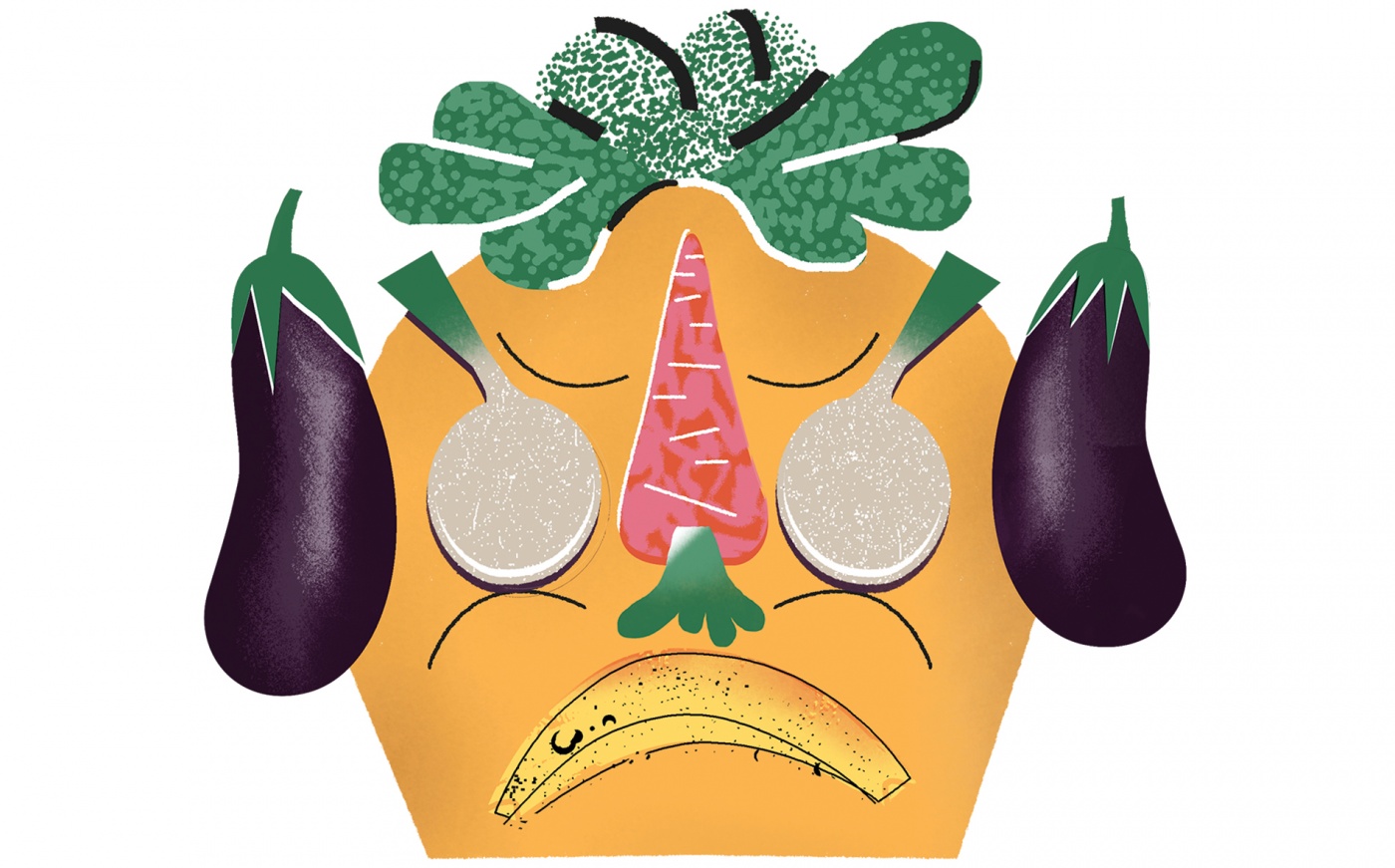 But organic food might make you meaner.
Research has shown that certain items or actions can make us feel morally superior—and organic food is one of them. A 2013 study out of Loyola University found that even just seeing a picture of organic food (as opposed to those who saw pictures of a sweet treat like a brownie or a neutral food like mustard) caused participants to judge things like consensual sex with a cousin, or lawyers trolling the ER for clients, more harshly than those who did not see the organic food. These same participants were then asked if they could help out another professor in the department with an unpaid study; those who saw pictures of organic food volunteered half as much time as the other students. According to Herz, “Interacting with products that are ethically branded has the counterintuitive effect of making us feel entitled to be greedy and immoral.” 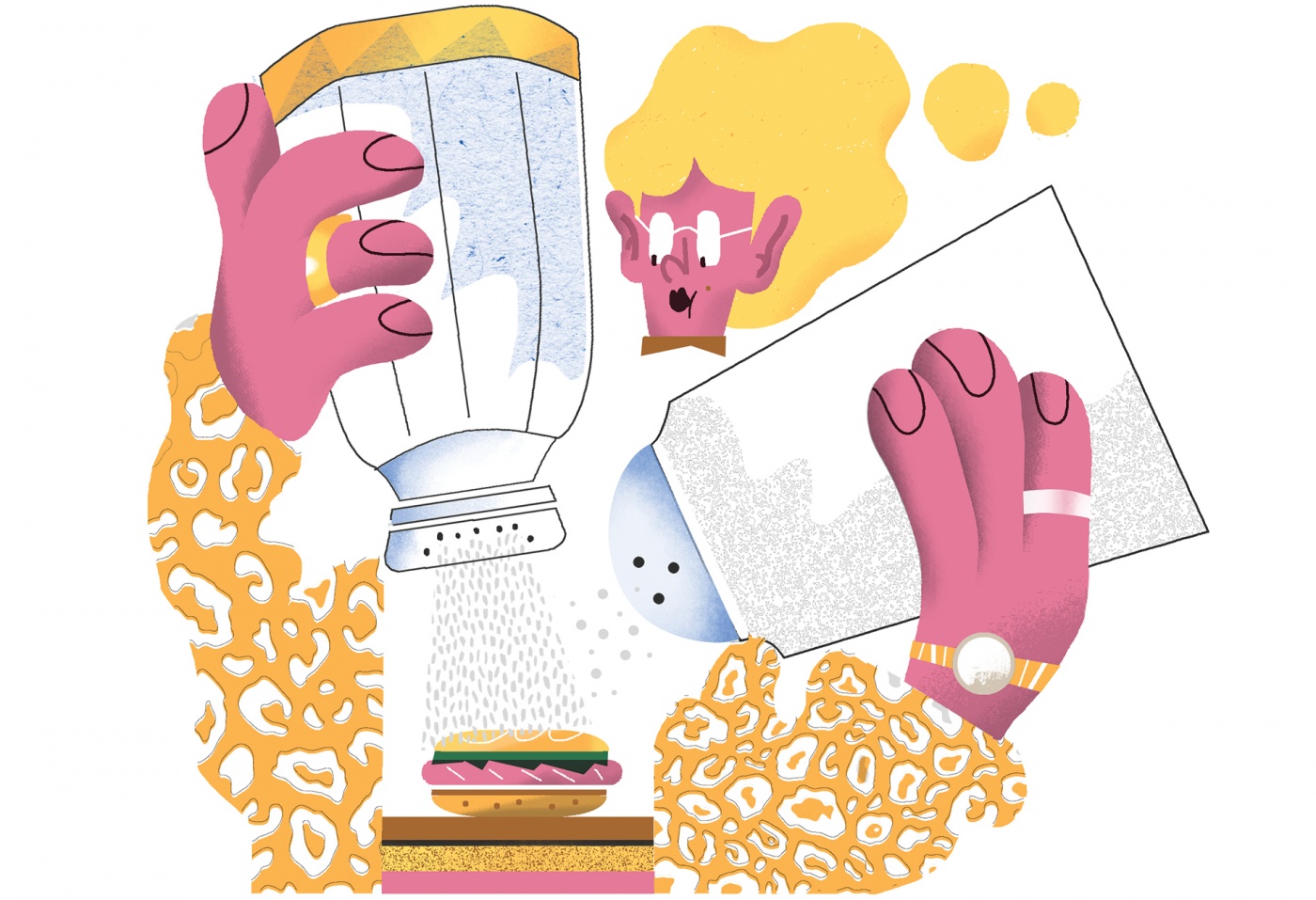 If you like salt, blame your mother.
Turns out your salt preferences are a result of your past—potentially even your pre-birth past. Herz points to a 1995 study in the journal Appetite that showed that infants of mothers who had suffered from morning sickness, when offered salted water versus plain water, drank more salted water than babies whose mothers did not have morning sickness. The authors of the study also found that college students whose mothers had morning sickness still had a preference for salt compared with their peers. Herz offers two explanations. First, that women with morning sickness consumed more salt when pregnant to account for fluid loss. Or, the babies developed a taste for salt later in life because they were deprived of it in utero. “The idea that we crave a nutrient if we’ve been deficient in it is interesting,” says Herz. “We are learning that these specific hungers can be a function of early exposure.”

If you think food is fattening,
you’ll burn more calories.
This might sound crazy, but science backs it up. Herz cites a study out of Yale University in which subjects with a normal weight drank either a milkshake labeled “Indulgence,” which was marked “620 calories,” or one labeled “Sensi-Shake,” which was marked “140 calories.” But what the participants didn’t know was that the shakes were actually identical, each clocking in at 340 calories. The subjects drank two of these shakes, one per session, with sessions scheduled one week apart. They agreed to blood tests before and after drinking each shake to measure their levels of ghrelin, a hormone that rises and falls in proportion to the number of calories we consume, in order to balance our metabolisms. Those participants who drank the “Indulgence” shake experienced a rise in ghrelin levels three times higher than those participants who drank the “Sensi-Shake.” In other words, their bodies actually behaved as if they had consumed far more calories than they did. “This means that simply believing that you have consumed a whole lot of calories speeds up your metabolism—you actually burn more calories—and this in turn makes you feel less hungry,” says Herz. 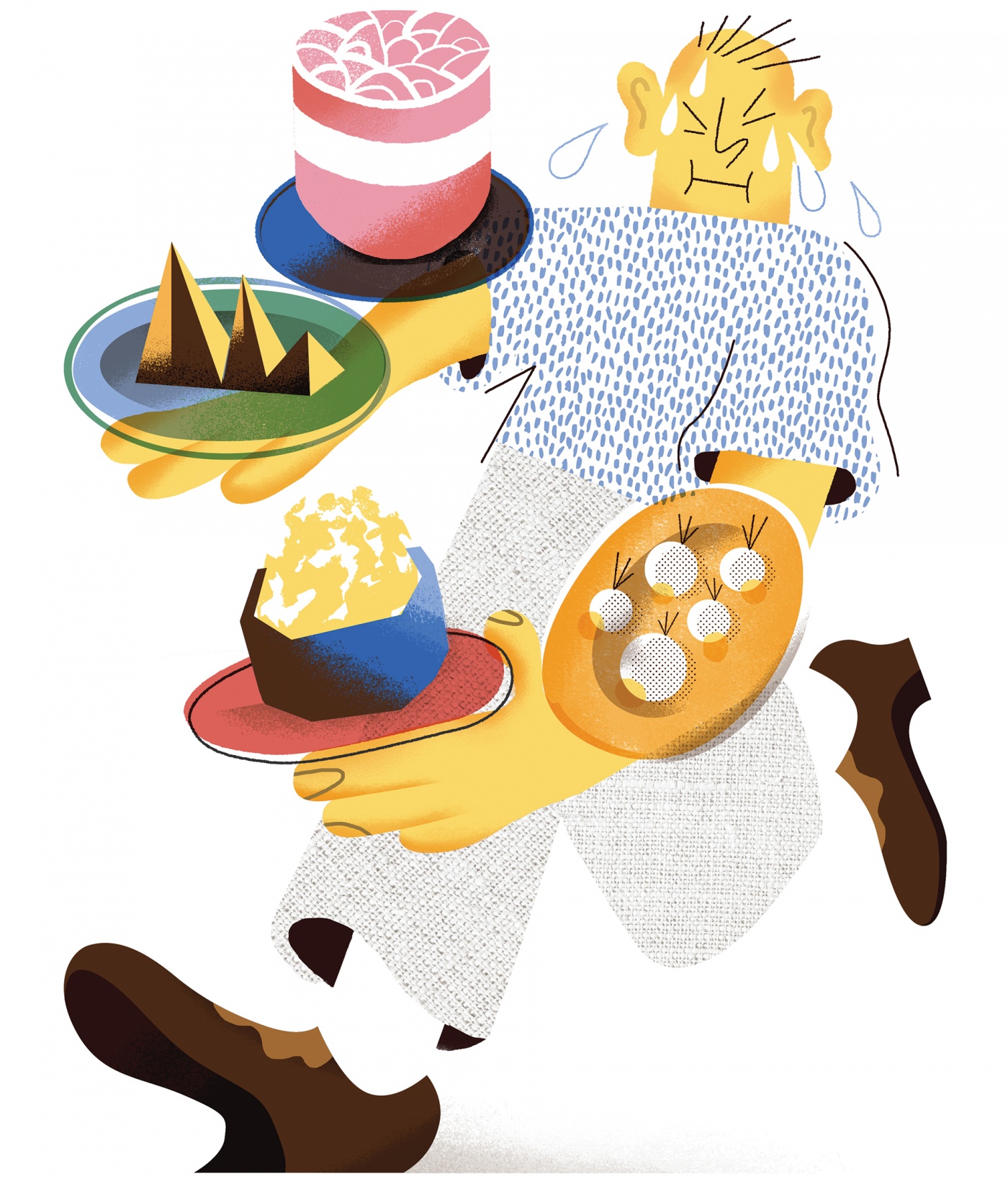 A red plate might help you eat less.
Food visuals—simply the way that food is presented and contextualized—make a difference in your eating experience. Chefs have been using swirls of sauce and the perfect placement of microgreens to make restaurant dishes more appealing for a long time. But beyond that, the color of the plate itself can play a role. Scientists have found that color factors into our perception of what we eat and whether we are willing to consume it. The presence of red in a food, for example, will make it taste sweeter, possibly because ripe fruit is often tinged with red. Study participants have preferred hot chocolate served in a red mug to that served in a blue mug, possibly because red denotes heat, while blue denotes cold. But on the flip side, red is also the color of warning, threat, inflammation, and blood. A study in Germany found that participants offered pretzels in a red container (opposed to white or blue) ate half as many as their colleagues. No clear takeaway here, except that what you see definitely seems to influence how much you eat.

You’ll like tomato juice more in a plane.
What we hear changes how we perceive flavor. The ambient noise in an average flight cabin is about 75 to 85 decibels. This high volume, research shows, reduces perceptions of salty and sweet. (Hence why food is relatively tasteless on airplanes.) But a scientist at Cornell University found that loud noise will also raise your ability to perceive umami, that savory basic taste. And one food that is high in glutamates, a potent source of umami? Tomatoes. “This is the explanation for why on a recent flight my husband turned to me after ordering a Bloody Mary and exclaimed, ‘These always taste so good on airplanes!’” says Herz.

Picky eater? Maybe you’re a supertaster.
How much you like black coffee, Brussels sprouts, or IPA beer has a lot to do with genetics. “Supertasters” are born with two copies of the dominant gene on chromosome 5, known as TAS2R28. (“Nontasters” have two copies of the recessive gene; “tasters” have one of each.) Being a supertaster is not as super as it sounds. For them, tastes are extreme—bitter especially. This is why supertasters are often more picky eaters, preferring less intense flavors, and steering clear of highly bitter foods like black coffee. But that’s not all. Supertasters, writes Herz, also feel more intensely. “Interestingly, what kind of taster you are is related to your emotional sensitivity and personality,” she says. This includes feeling more anger (after watching the attempted rape scene in the movie Pretty Woman, as they did in the study) and feeling more disgust in general (particularly towards bodily fluids, decay, disease, and mutilation).

If it smells good you’ll eat more.
Many people use the words “taste” and “flavor” interchangeably, but they are very different. We perceive salty, sweet, bitter, and sour taste on our tongues and in our mouth. Almost everything else that makes up flavor (all the spices, the herbs, the nuance) comes from the sense of smell. As a result, aroma is an alluring cue to eat. Studies have been done to show this allure. For example, Herz writes of a 2003  study at the University of British Columbia in which some undergraduates were exposed to the scent of baking pizza for 10 minutes before consuming pizza themselves. Those that smelled the pizza first ate 43 percent more than those that hadn’t been exposed to that delicious aroma at all. “Unlike our other senses, smell is directly wired into the emotion, memory, and motivation centers of the brain,” says Herz. “This is why food aromas are so irresistibly persuasive.”

Take this all with the proverbial grain of salt!
This isn’t a diet book, says Herz. But she hopes that it will help readers reflect on what food means to them in the moment. “You should eat as varied a diet as possible,” she says. “Don’t deprive yourself, but eat in moderation—especially things that are less healthy.”

Molly Birnbaum ’05 is Editor in Chief of America’s Test Kitchen Kids. She lives in Providence and is author of Season to Taste: How I Lost My Sense of Smell and Found My Way

Reader Responses to Pondering the Palate