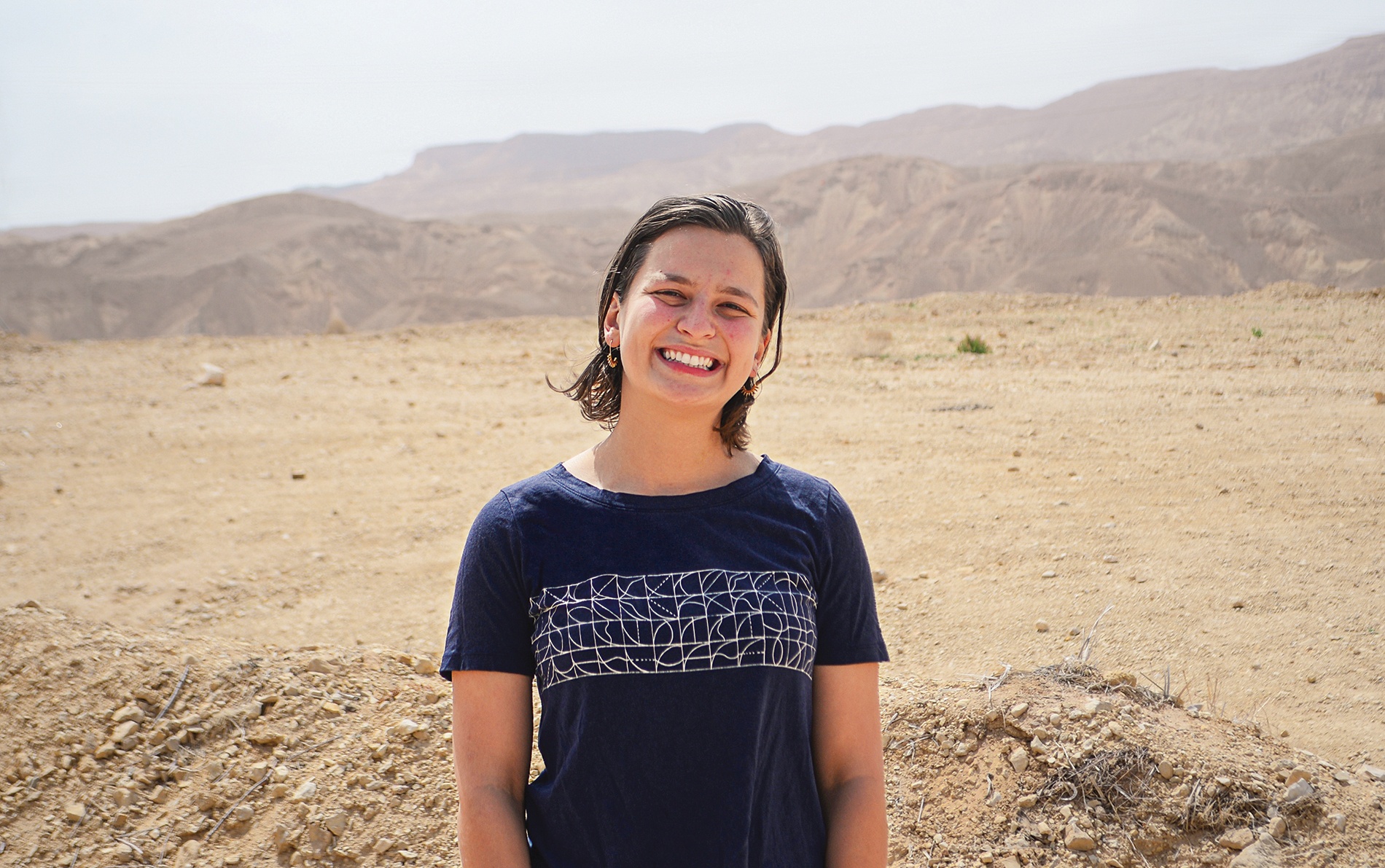 The State Department announced that U.S. citizens should return home or stay indefinitely, and that day I took a long walk through date palms and sand dunes. I’m studying at the Arava Institute for Environmental Studies with 60 other students—Israelis, Palestinians, Jordanians, and internationals. My program’s motto: “The environment has no borders.”

We can’t leave the kibbutz except permanently. After a long conversation with my parents, we decided it was safer for me not to return to New York. Everything is jointly shared here, so no one is worried about supplies like toilet paper and hand sanitizer flying off the shelves. There’s a sense that this is a communal fight, aimed at preventing the virus from infecting the most vulnerable, instead of every family fighting for itself.

The kibbutz shut down its main dining hall; a couple of volunteers bring food that we eat out of mugs and ice-cream-pint containers on the grass under the sun. The synagogue is still hosting Friday night services, but they’ve lost some of their joyful flavor. I’m not a devout Jew, but I liked the beautiful singing. Now they ask everyone to sit three seats apart, creating a distance even the most spiritual songs can’t bridge.

I help plan cultural cooking nights, at which we teach each other family recipes. Friends organize language learning groups, dance classes, and meditation sessions to fill the time now that we can’t leave campus.

We hear the firehose of bad news. My roommate’s parents in Vancouver are recovering from COVID-19. I know there’s a high chance my family members could get infected. My roommate, after talking to her parents, called our program “quarantine heaven.”

On March 14, I was one of the first at Brown to get an email from the R.I. Department of Health. It said I’d been in contact with an individual infected with the coronavirus nine days previously and should self-isolate for the remaining five days of a two-week quarantine. My first thought: “This isn’t going to stop me from saying goodbye to my friends, right?” The answer was, of course, yes. My roommate Justin microwaved some Easy Mac and left it outside my room.

The next day I made a stupid video of me unboxing the health supplies Justin picked up from health services. I whiled away hours watching people react and comment. 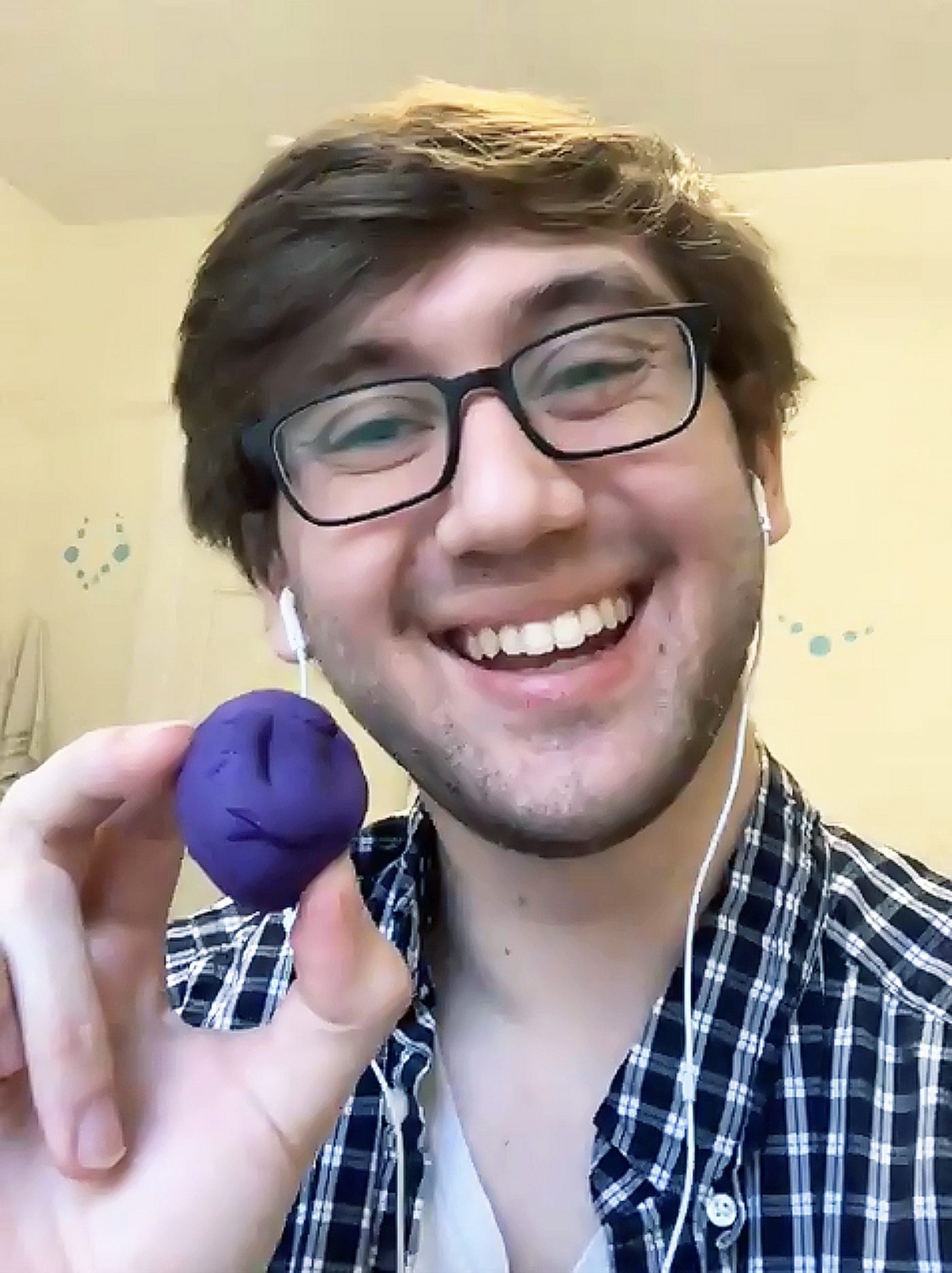 Kleinman says nearly all the comments on his videos concern his quarantine companion, a Play-Doh figurine commentators christened Purple Buddy.

Mom drove over from Massachusetts with food. The closest I got to a real, human conversation was standing in the corner of my room and yelling through two doors.

I downloaded the Animal Crossing app and everything after that was a blur. Since my window faces the neighbor’s house, I mainly told the time of day from the position of the sun in the app. Justin microwaved mom’s steak tips and I ate them with my hands because we were out of plastic forks.

On Day 4 I made a three-minute video about my self-care routine: wearing a blanket, drinking bottles of water in a single chug, self-expressing through art, drinking absinthe (not really). Justin asked why I hadn’t been eating much and I said I didn’t want to be a burden. He yelled until I asked for Easy Mac. We FaceTimed to have dinner together.

Day 5, my video detailed new techniques for going to sleep, including doing the work I had plenty of time to do this week yet didn’t.

At midnight my roommates played “The Final Countdown.” I put on my chicken suit, toasted them, then called my family to celebrate. I’ll miss the daily calls from Brown Health Services asking about my temperature.

I learned a lot: that my friends will truly be there; that my room is more spacious and less spacious than I imagined; that there are voids Animal Crossing can fill, and others it can’t. I learned I’m lucky I can laugh this off.

The morning before spring break, I opened one eye to wish my roommate safe travels. She responded, “My school’s calling all students back.” I shot out of bed—half the students in our study abroad program went to her school.

Jordan had only one known case of coronavirus. It seemed safer to stay. The weather reflected our moods: the sun’s heat was gone, and when we finished midterms a sandstorm left us coughing. Aria, a close friend, was pulled from the program. Our faces were sandy and streaked with tears. Then came a thunderstorm like no other. 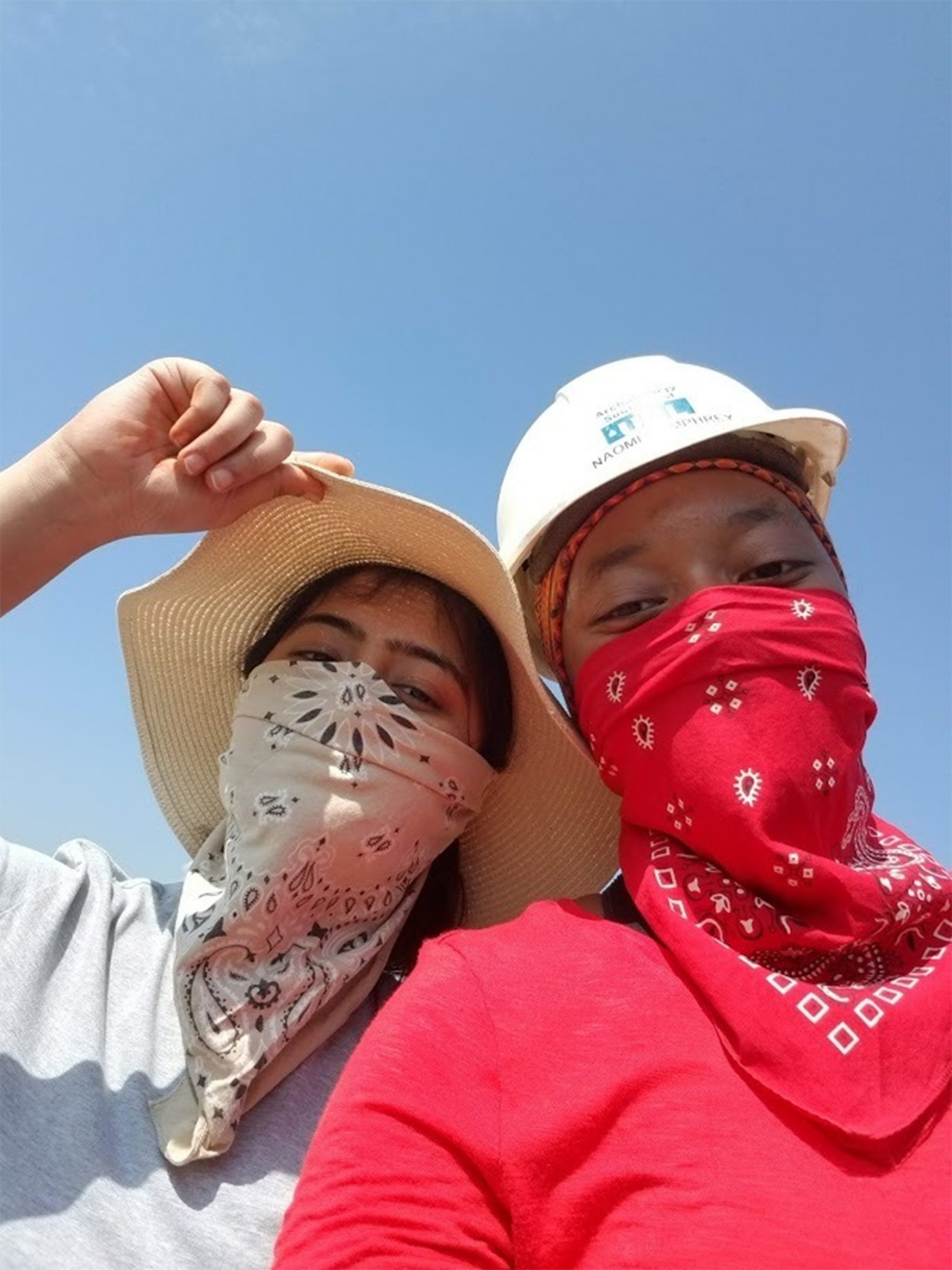 Amsel Saleem ’21 and Lauren Campbell ’21 did research for a Greek archeological dig during the summer of 2019. On site, they wore bandanas to prevent excess dust inhalation.

Two days later the cold was still with us, but half the students were gone. The program announced it would remain open. Aria came with good news: Her university had accepted her petition and was allowing her to stay.

Over lunch we received word. Jordan was closing its airports in less than 48 hours, and foreigners, especially students, needed to evacuate.

The following four hours were filled with panic. When asked what would happen if we couldn’t get out of Jordan, our administrator responded: “Get out of Jordan.” Countries were closing their borders with a snap of their fingers and students with connecting flights were left with useless tickets. Europe was closed, the number of open Middle Eastern airports was uncertain, flights connecting through Africa were too expensive. We went from trying to land in New York to anywhere in the U.S. Then we began listing other countries in which we had relatives.

We found tickets and scrambled to pack, pulling decorations from walls, leaving clothes behind. The fog was thick as we headed to the airport. I refused to cry—I’d wait to get home.

It was the morning President Paxson told undergraduates who lived in Brown residences to leave by March 22. I was scared of traveling. And I was scared of being a carrier because my mom’s immuno-compromised.

I spent the next day with my Brown University family. We hung out, we hugged tighter than we did before. My mother said, “Be ready to leave at any point, because we don’t know when your flight’s going to be booked.” Flights to Karachi were hard to come by. 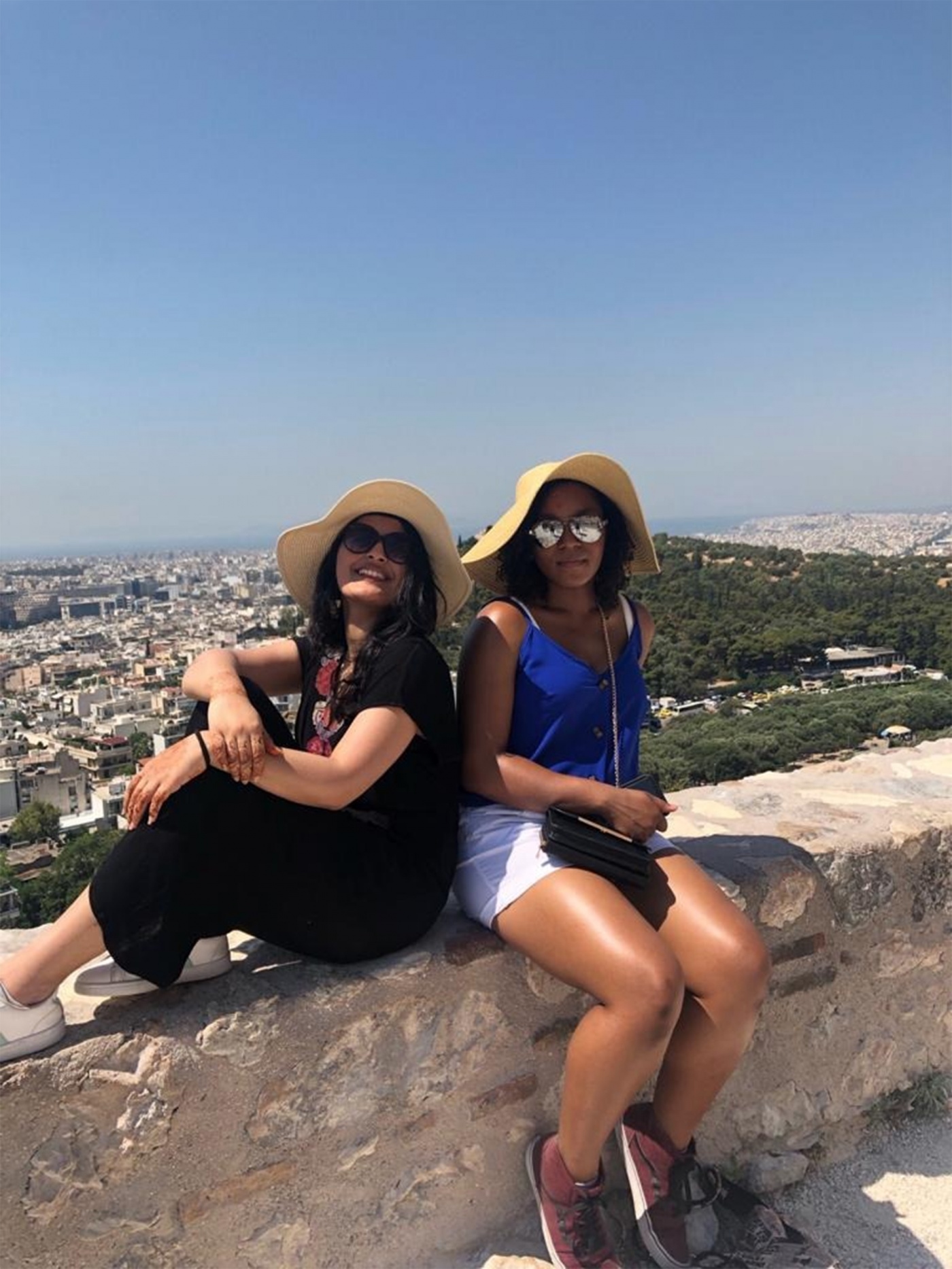 Amsel Saleem ’21 and Lauren Campbell ’21 sight-seeing in Greece, where they were researchers on an archeological dig during the summer of 2019.

The following day was a friend’s birthday. We hadn’t realized how bad the situation was going to get. I still didn’t know where I’d be able to store my belongings. I just started packing. My family wanted me out of Providence; I was going to Virginia or returning to Pakistan, and I was to leave in five or six days.

Then it was announced that there was an active COVID-19 case on campus, and the move-out deadline became March 17. I stopped packing my things and we started packing the apartment.

I learned I had worked at one of the events potentially attended by the active case; I’d served food, held doors for everybody. Instead of going out to dinner, we had a friend gathering, which is exactly what they told us not to do, but we did anyway.

That night I told my parents I might be a carrier. My mother was emotional, and dad said, “Maybe you should petition to stay.”

Two days later I learned the active case had not attended the event I’d worked. I got my flight information—a 37-hour journey to Karachi. I spent my last day sorting out mail issues, donating nonperishables, and tidying up. I heeded my mother’s advice: “Take two blankets with you. Clean the seat as soon as you enter the plane and cover it with a clean blanket. Clean the table in front of you. Clean the pockets on the seat ahead. Don’t eat anything except the packaged food.” —as told to Lauren Campbell ’21