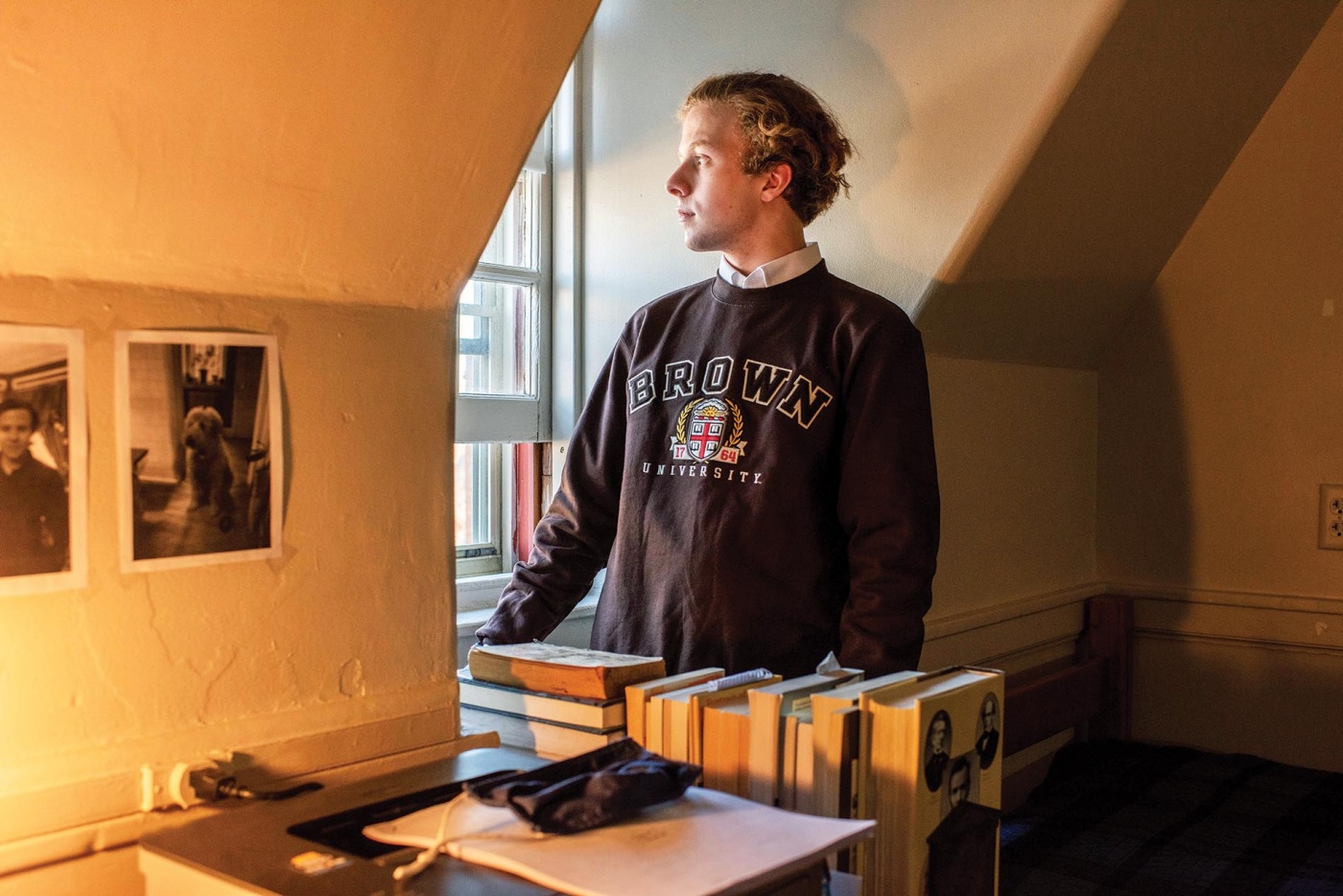 Noble Brigham ’24 looks out over the quiet campus from one of the dormer windows in his Littlefield room.Photo: David DelPoio

Strong movers loaded the contents of my family’s overpacked car into two gigantic cardboard boxes strapped to wheeled carts and hoisted them, huffing and puffing through their masks, up four flights of stairs to my solo room in Littlefield Hall. The unexpected assistance was part of Brown’s COVID safety plan, meant to expedite a staggered move-in and maintain social distancing. After my parents and I unpacked and said goodbye tearfully, I was alone for the first time in 10 months. Really, really alone: First up was a two-week quarantine.

Then I got a call from Tracy Breton, a Pulitzer Prize-winning investigative reporter who taught the journalism class I took remotely during the fall semester—first-year students had been barred from campus but allowed to take one course for free. Professor Breton wanted to make sure I was settling in well.

Such connections with professors were another pandemic perk for some first-year students, offsetting the often hard losses. Because we could take only one class during the fall, I spent more time on assignments and got to know Professor Breton—who shares her cell number with students—better than I could’ve pre-COVID. We talked for hours about assignments over the course of the semester.

Mandatory testing set a rhythm for College Hill life. Twice a week, starting during the “Quiet Period,” we all make the trek to get tested at the Olney-Margolies Athletics Center, a mile away from my dorm. On my initial trip, I got lost because the address was wrong on Google Maps. All the walking was exhausting at first because I had spent months barely leaving my house, but I quickly learned to enjoy the excuse to explore the East Side during a time when most outside contact was forbidden. Once the quarantine ended, my class walked through the Van Wickle Gates—masked, maintaining 6’ distance, behind two classmates carrying a 2024 banner made of sanitizable vinyl.

Shuah Yu ’24 had never seen College Hill before she arrived in January. She met people by asking them for directions and while standing in line for pre-bagged meals and walking to get mail. The socially distanced lines could take 45 minutes in the first weeks, so there was plenty of time to chat.

With some of these new friends, she has compared dorm decorations over FaceTime and Zoom. Not everyone was a stranger, though. Yu had gotten to know people over the fall semester through GroupMe—a group text-messaging app— and Instagram. She spends approximately seven hours a day online, because it’s the only way to interact now.  But it’s hard to build a strong friendship with someone you’ve never met.  “The standards for a close relationship kind of have changed…” she reflects.

Facing a fall semester with nothing much to do, other soon-to-be first-years dove into 500-page novels.  Shortly after Brown announced that freshmen would not be able to come until January, Brian Freedman ’24 helped to start a book group. They began with The Goldfinch, Donna Tartt’s epic novel about a stolen painting and how it affects the life of its holder. Since then, they have read I Am Malala, Never Let Me Go, and Interior Chinatown.

Freedman hopes now that everyone’s on campus, he can make the group, which made it easier to start Brown and made him more excited to participate in the intellectual community,  an official club with members from different classes.

Never Let Me Go was Freedman’s favorite book.  Its examination of people leaving the innocence of childhood was particularly relevant to the pandemic, which altered the end of high school for seniors and has accelerated that maturation. He said, “I think that having that pandemic kind of influenced how you see the world and what you’re grateful for in the world.”