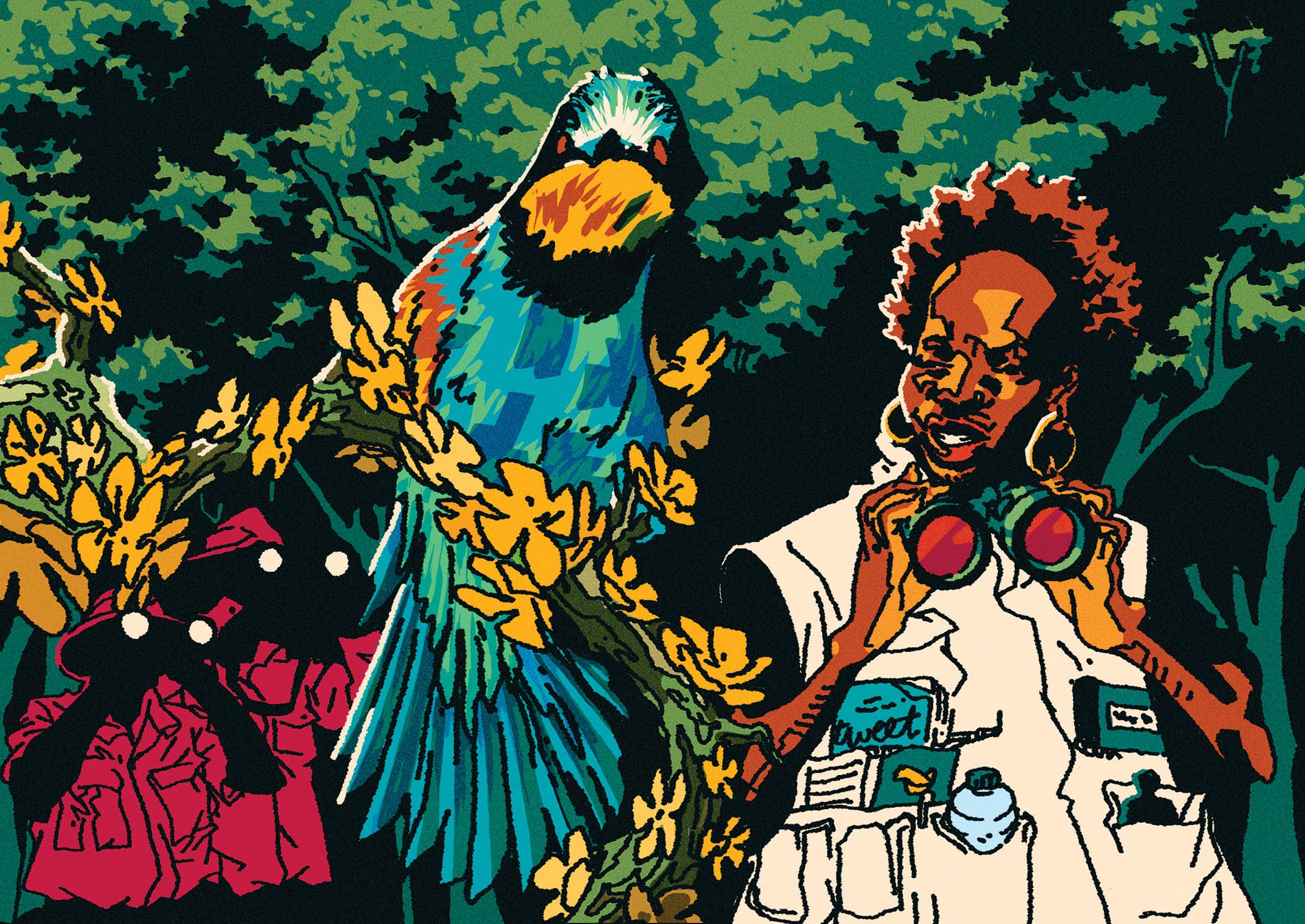 Bird by Bird
An environmental studies course on birding looks at what separates us from one another and from nature, and what might bring us together.

Olivia Maliszewski ’22 was not an experienced birdwatcher when she enrolled in ENVS 1557: Birding Communities in fall 2019. “I knew what it was,” she says, “but I’d never actually gone out with a pair of binoculars.” She was drawn in by the introductory lecture from Professor Nancy Jacobs, an environmental and social historian, about the intersections of race, gender, power, and the medium for it all: birds and the people who watch them.

The course is multi-layered: students learn about New England birds, as well as inequities in the world of birding, while also teaching local schoolchildren. “The class is about social relationships in our access to nature—how we connect to each other as we connect to the birds,” Jacobs says.

A sampler of scholarly readings

“The importance of guano birds to the Inca Empire and the first conservation measures implemented by humans”  by Pedro Rodrigues and Joana Micael
Ibis 2020.

Jacobs assigns material that challenges the “old white male birdwatcher” stereotype. “Birds are so diverse,” she says, “but the people who can claim authority and you associate with knowledge about them are not.” The course looks at racial, gender, and class disparities around access to nature and delves into the rich, multicultural history of birds as they relate to such disparate topics as farming, traditional medicine (parrot tongues have been seen as a cure for muteness), even predicting the future (the word augur is said to come from the Latin avis, or bird). Jacobs notes that she finds taxonomy and similar aspects of ornithology, the scientific study of birds, “quite dull.” Students spend several weeks learning about the birds themselves, but the course  focuses on the power and politics of “how people relate to each other around these animals.”

In May 2020, Christian Cooper, a Black man, made headlines for filming a white woman calling the police on him while he was birdwatching in Central Park. When Jacobs heard about the incident, she immediately recognized Cooper due to his “celebrity” in the birding world. The incident brought viral attention to the injustice of racially motivated false accusations. In addition, Jacobs says, it led to an “explosion” of writing and interest in racism in the birdwatching community, including “Black Birders Week,” sponsored by the National Audubon Society.

Brown students take these questions of exclusion and power into other classrooms when they work with elementary and middle schoolers. Emma Sloan ’19 helped build the mentorship program in Providence with Adam Moreno ’18, who created a Spanish-English guide to Providence’s birds as a final project in another of Professor Jacobs’s courses. They partnered with Brown Elementary Afterschool Mentoring, a program organized by the Swearer Center for Public Service at William D’Abate Elementary School in Olneyville. For Sloan, it was important to teach students who may not have traveled to see natural wonders so that “they can have the ability to understand and name and develop a connection with nature.” The resulting positive associations, Sloan says, “will hopefully make nature something they want to preserve.”

Maliszewski, who served as the course’s teaching assistant this spring, brought in students’ families and histories to their birding practices. During a lesson on bird migration, “we had them write their own migrational stories,” she says. “A lot of students had family in Mexico and Central America, so we had them connect the birds to their stories and culture if they had family there.” The bilingual birding guide also allows students from Spanish-speaking families to identify animals in both languages and share their newfound knowledge and abilities with relatives.

While hybrid learning last spring brought its share of challenges to a course built on in-person observation, Jacobs says “great things” came from having students around the country. Bella Cavicchi ’21, who took the course remotely from Mansfield, Massachusetts, posted on her town’s Facebook page asking if parents wanted to have kids learn about birds on weekly Zooms. Then, every Saturday morning, she and members of 12 families “talk about birds, but also about the skills of a scientist and what we try to observe when we go outside.” She says she appreciates the course’s intergenerational nature: “I’m normally locked into conversations with people my age, so it’s nice to be in a space with five, six, and seven-year-olds and see their innate curiosity.”

Jacobs’s encouragement of “mindful birding”—assigning slow walks to note bird calls and sightings—may have helped students manage pandemic stress. “I’m seeing their appreciation and their joy as they’re cultivating their knowledge,” she says. The course, which Jacobs is teaching again this spring, is about developing “something within yourself to connect with other people as well as cultivating some form of environmental justice,” she says.

Former students say the course changed the way they interact with their surroundings. Maliszewski describes walking on Brown’s Main Green, noting the presence of European starlings or bluejays. “Once COVID goes away,” she says, “I definitely want to be involved in more birding initiatives on campus or outside of Brown.” Sloan has cited the course in work for her masters in environmental science at the University of Michigan about “blossoming programs” in the field of education for sustainability. “I saw what it did for the kids, and that it doesn’t take much to give them the tools to be independent and to really be in nature and understand that nature makes them feel fulfilled and empowered,” she says. “I’m always on the lookout for how I can teach more people about birds.”

“Birds are disappearing at an alarming rate,” notes Jacobs. More diverse birding communities, she hopes, will ultimately be “good for humans—and good for the birds.”

Reader Responses to Bird by Bird

A timely innovative course about the diversity of birds, people, and their many relationships. Good for Nancy Jacobs to combine science, humanities, and social science in introducing students to lessons about nature, race, gender, and power.