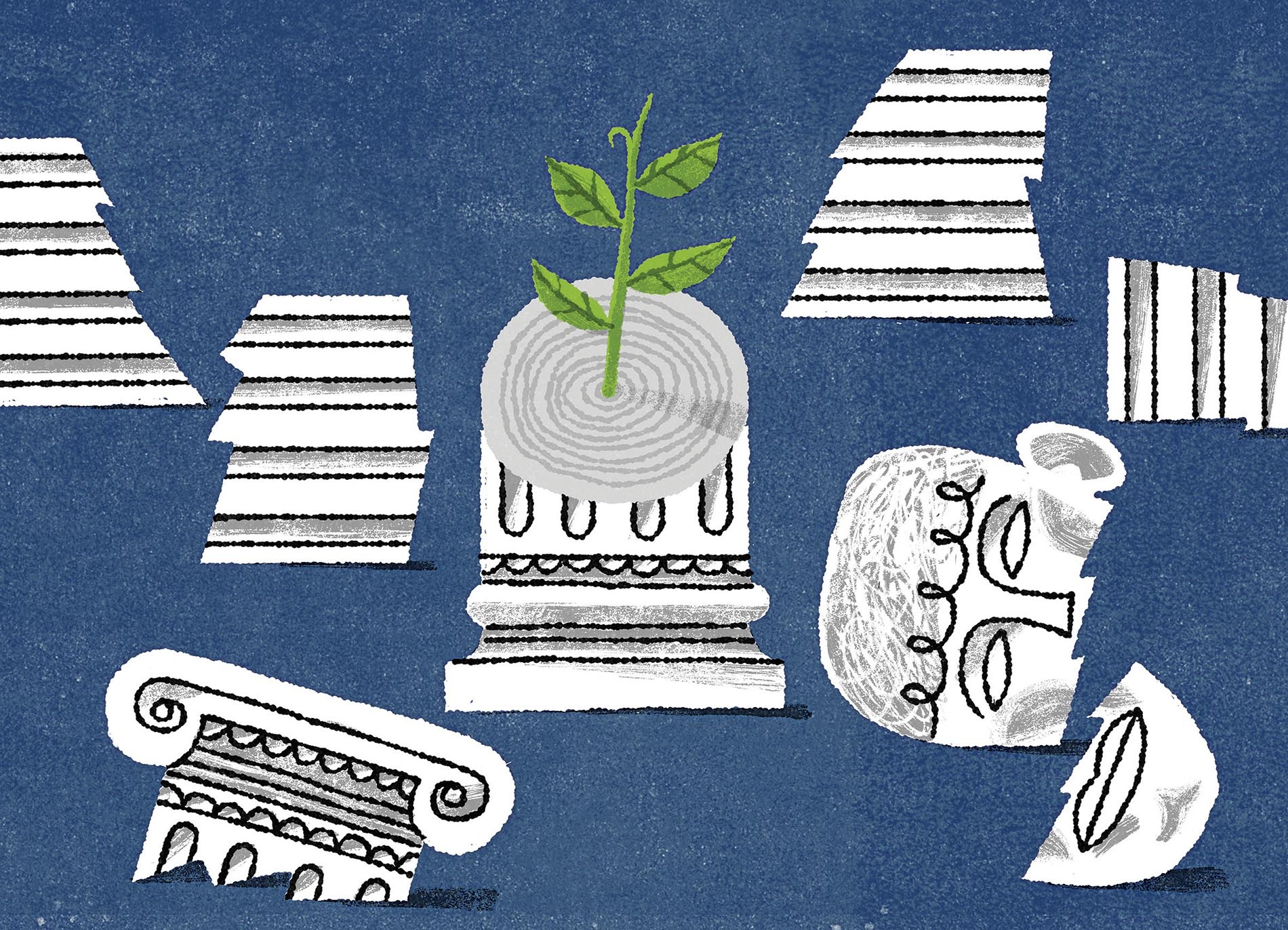 Classics: Dead or Alive?
A new course examines ancient Greece and Rome with a 21st-century lens.

Molon labe,” declared one of the flags carried by insurrectionists at the U.S. Capitol on January 6, 2021. The translation from classical Greek is “come and take them,” referring to weapons, and comes from the 1st-century essays of Plutarch, quoting a defiant Spartan king. White nationalists marching in Charlottesville carried flags with ancient Roman symbols. For 21st-century American proponents of the supremacy of “white culture,” ancient Greece and Rome are revered as where it all started. That’s among the many reasons Princeton classics professor Dan-el Padilla Peralta, in an incendiary 2019 panel discussion, denounced his own field as engaging in the “production of whiteness” and said he hopes classics, as currently constructed, “dies as swiftly as possible.”

Since then, more and more scholars have been asking, should classics even proceed as a field? Does it need merely to be disrupted or should it be dismantled altogether, dispersed into the departments of history, archaeology, art history, and foreign languages? How can classics—a historically white, male, and elite field of study—be made more accessible?

Last December, for one of the final periods of 21st Century Classics, 13 students filed into an old-fashioned, wood-paneled classroom on the top floor of Sayles Hall, ready for another such debate. This time, students argued over whether or not ancient languages like Greek, Latin, or Sanskrit should be a requirement for Brown classics concentrators.

“I stand with those who have no more patience for the study of ‘classics’ as a fairytale Western origin story,” Associate Professor of Classics Johanna Hanink wrote in the Chronicle of Higher Education in February 2021. “That paradigm has not even been around for very long,” she says, “and people will still be reading The Odyssey, Antigone, and The Aeneid long after it’s gone.” But Hanink also points to “all the intellectual innovation and knowledge advancement that is happening these days in and alongside classics,” much of it happening, she says, thanks to classicists of color. “While there are plenty of reasons for anger,” Hanink concludes, “there is also cause for hope.”

“We wanted to try and encourage discourse and dialogue among students about what classics is and what it might be for students today,” says classics department chair Graham Oliver, who designed the course with the help of  Mac Carley ’24 PhD, a 4th-year classics PhD student, and Ayanna Tafe ’23, an undergraduate.

The new course—designed as a way for undergraduates to engage with some of the debates around diversity, accessibility, and racism that are roiling classics departments across the country—covered the work of classicists from marginalized backgrounds, new interpretations of classical culture in the 2020s, and hot topics such as whether statues celebrating the ancients belong on the Brown campus.

“The construction of our field is really bound up with white supremacy and many forms of elitism,” says Amy Russell, associate professor of classics and head of the department’s Diversity and Inclusion Action Plan working group. Russell points to the concentration’s ancient language requirement and reflects on how knowledge of languages like Latin and ancient Greek has traditionally been restricted, so that only people from certain backgrounds—typically private prep schools—come to Brown knowing the basics. She says this leads to the gatekeeping of cultural capital.

To those who say that removing the language requirement (Brown’s classics department also includes students of Sanskrit and ancient Indian languages) will mean a less rigorous course of study, Russell suggests looking at the issue of rigor with a wider lens. “Why not turn it around,” she points out, “and ask how was education rigorous if the students of the 1950s did not think about slavery in the ancient world?”

Whether to make ancient languages a requirement is still a live debate, and professors are also discussing how to make changes to the curriculum to make classics more accessible and, with the inclusion of more courses focusing on diversity and inclusion, perhaps even antiracist as well. Oliver’s 21st Century Classics thus acts as a testing ground to imagine what Brown’s classics department could become.

Oliver says the course was inspired by the Sheridan Center for Teaching and Learning’s Seminar for Transformation around Anti-Racist Teaching (START), which combines antiracist teaching practices with an opportunity to design new syllabi.

START “made me think more directly about what I was trying to do in a course and how I was going to achieve it,” says Oliver. He adds that it isn’t often that academics are introduced to new pedagogical approaches.

The syllabus eventually designed by Oliver, Carley, and Tafe focuses on visual art and culture, and how receptions of classics have changed over time. For example, the first few weeks examine the culture war over classics, such as the debate over statues and how classic iconography is being politicized today, such as the case of Second Amendment defenders who celebrate Spartan Greek helmets. Militarism was a theme as students explored how for decades classics and the military have been intertwined.

Students spent a week on the work of scholars of color and engaged with how classics have represented the perspective of the lower classes. After a few students asked about the work of women scholars and others from marginalized gender identities, Carley says they made changes to the syllabus to include those voices.

Students taking the course included first years who had never taken ancient languages or classics before, those who had taken some Latin in high school, and a few upperclassmen, like Ryan Millard ’22. A double concentrator in public health and biology from southern Illinois, Millard says he got interested in classics after binge watching YouTube videos on classical literature, mythology, and figures like Alexander the Great during quarantine. Going into his senior year, he realized he had a few non-concentration classes left and thought he would try out his new interest in an academic setting.

Oliver says changes in the field “require the academic to admit that they need to keep learning.” As a first step, he will include more 21st-century material and investigate the connection between phenomena like Percy Jackson and Assassin’s Creed and the classical world he knows so well.

Millard is doubtful that “an institution that has proven itself to last 500 years teaching these racist ideologies… has the internal resolve to create radical change.” He agrees with the ‘burn it down’ philosophy argued for by Padilla Peralta. Carley argues the rhetoric around burning down the field is overblown and is optimistic that changes can happen, if given time. “There’s a growing number of classicists within the academy and outside who have a strong intersectional approach,” says Carley. As for Oliver, he says the course pushed him outside of his comfort zone in new ways but also showed how the department needs to continue listening to students as it engages in the long process of creating a more inclusive learning environment.