A Figure Straight Out of the History He Wrote

Meeting John L. Thomas was a bit like encountering a figure from one of Jack’s brilliant histories of 19th- and early-20th-century America. There was the same flinty, New England resolve of William Lloyd Garrison, the abolitionist subject of Jack’s first book, The Liberator. The same outrage at the inequities of American society that moved Henry George, one of the central figures in Jack’s analysis of Gilded Age reform, Alternative America. The same love of nature and of good writing that animated Bernard DeVoto and Wallace Stegner, the thinkers whose relationship was at the heart of Jack’s recent A Country of the 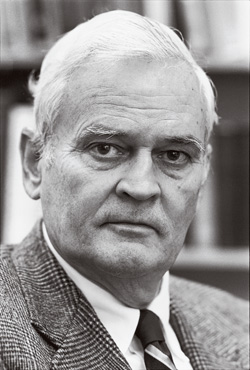 D. Perrotta
Thomas in 1990.
Mind. And the same hunger for intellectual friendship so important to Mari Sandoz, the Great Plains novelist and historian who was the subject of the manuscript that Jack was working on when he passed away in Providence on June 11, at the age of seventy-eight.

Jack first came to Brown in 1955 to earn a PhD in American civilization. Other than a short stay in Cambridge in the early 1960s, when he was an assistant professor at Harvard, he would spend the next half-century at Brown as a member of the history department. Although Jack earned remarkable acclaim for his research—his biography of Garrison received the 1964 Bancroft Prize, the most prestigious award given to American historians—his legacy as a teacher was even more impressive. For those fortunate enough to take one of his classes (as I did in 1986), the experience could be both thrilling and a little daunting. Jack had high expectations, and he wasn’t shy about letting us know when we weren’t measuring up. Essays came back tattooed with comments, and no shirking was permitted during classroom discussions. One afternoon, Jack, frustrated that we had little to offer about our weekly reading, blurted, “If you aren’t prepared, I’m not going to waste my time here,” and stormed out of the room. For a moment, my classmates and I sat in stunned silence—could professors do that, leave in the middle of class? But Jack had made his point: there was to be no coasting in his classroom. For the rest of the semester we came to class ready to engage with the reading and with one another in a way I’ve seldom seen equaled in other classes I’ve taken.

Despite his passionate interest in the affairs of the day and the latest historical scholarship, Jack often seemed as if he would have been more at home in the company of the turn-of-the-century reformers whose lives he limned so eloquently in his research. Jack had little use, for instance, for computers. He wrote mainly by hand or on a trusty manual typewriter. He never acquired an e-mail account or spent time surfing the Web. Even though the University bought him a computer shortly before his retirement, the machine remained in his office in the box in which it had arrived, untouched and unused. Instead, Jack savored his summers in his remote cabin in Maine. It was a quiet spot, ideal for reading, writing, and contemplation—and far from most intrusions of the modern world.

Although Jack technically retired as the George L. Littlefield Professor of American History in 2002, the effect of this transition on his day-to-day life was negligible. His colonial home on Benefit Street remained a salon for everyone from undergraduates seeking advice on their honors theses to graduate students on whose committees Jack still served to colleagues hoping to get one of Jack’s rigorous readings of their latest chapters. Visitors seldom failed to notice that in Jack’s living room the place of pride was reserved not for his own work but for a stack of books written by his former students. The pile was impressive: over the course of his long career at Brown, Jack directed more than twenty-five dissertations in history and American civilization and more than fifty-five master’s and honors theses. Indeed, many of today’s leading historians (as well as many notable lawyers, journalists, businesspersons, and the like) can trace their intellectual genesis to a class they took as an undergraduate or graduate student with Jack.

John L. Thomas was married for forty-one years to Patricia Blake Thomas. He is survived by his son, John, his daughter, Jayn, and grandchildren Blake and Chandler Ellis. There will be a memorial service in Jack’s honor on Saturday, September 17, at 11 a.m. in Sayles Hall.