A Class Apart: Prodigies, Pressure, and Passion Inside One of America’s Best High Schools. By Alec Klein (Simon & Schuster).

High schools are irresistible to journalists. They’re filled with outsized personalities and roiled by political intrigue. They offer odd juxtapositions of teachers and 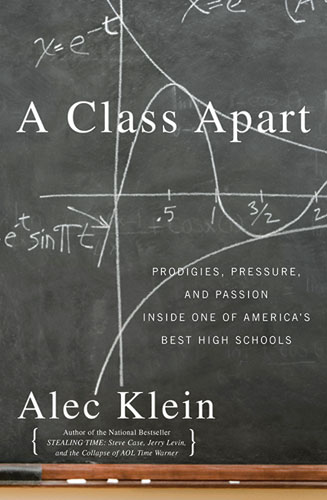 administrators who are extraordinary with those who are incompetent. Sometimes amid the paperwork, the politicking, and the hurtling hormones, kids even get educated, inspired, and challenged.

In 2006, nearly twenty years after he graduated from Stuyvesant High in Manhattan, Washington Post reporter Alec Klein returned to spend a few months observing and writing. The result is A Class Apart, an affectionate look at the quirky ten-story school that seems to turn out scholars despite itself.

Stuyvesant is a rarity—a public math-and-science school that admits just 3 percent of the students who take a test to qualify. Its alumni include Nobel laureates, a chess grandmaster, Olympic athletes, the founder of Home Depot, and the drummer for Blood, Sweat & Tears.

Klein’s book is no plain-vanilla recap of a year in the life of a school. His unusual, sometimes disjointed, style often mimics the energy and spontaneity of teenagers. He manages to both narrow and broaden his focus and collapses the narrative into just a few months during the spring of 2006. And while he focuses on several main characters, he draws on the lives of many other students and teachers.

Here’s how he describes his principal characters: “A ten-year-old prodigy who has the memory of a computer chip. A sixteen-year-old football captain who taught himself calculus. A seventeen-year-old heroin junkie whose gift is the beautiful poetry she scrawls on paper. A dedicated teacher who suffers from depression and isn’t supposed to be teaching because he lacks a license....” There are no miracles here; by the book’s end the junkie poet has disappeared into New York’s netherworld.

Stuyvesant “offers a window into the dark side of the American Dream,” Klein writes, “unyielding competition, massive pressure, chronic cheating, racial divisions.” Unfortunately, he merely touches on the problem of several lazy and bungling teachers who, because they are tenured, can’t be dislodged. But that’s a quibble.

Stuyvesant has the good fortune to attract motivated students and a cadre of devoted and innovative teachers. It also benefits from what many schools lack: involved parents. “They drive cabs. They run delis seven days a week…. They have spent years equipping their children with a wealth of experience—piano lessons, math camp, computer tutorials—so that by the time they arrive at Stuyvesant as freshmen, they are already ahead of the game.”

This is an optimistic look at the potential of secondary education. But the images that linger are the problems of Stuyvesant’s neighborhoods: high dropout rates, students with no direction, and the sucking sound of jobs leaving cities.

David L. Marcus is the author of What It Takes to Pull Me Through: Why Teenagers Get in Trouble and How Four of Them Got Out. He can be reached through www.DaveMarcus.com.

Reader Responses to What a Good School Looks Like