Two years ago, long before Harvard President Larry Summers resigned or historian Drew Gilpin Faust was named to succeed him, Faust, who was still dean of the Radcliffe Institute for Advanced Study, asked four of the top women in higher education—all current or past Ivy presidents—to speak at Radcliffe on May 2. At the event, Faust joked that she’d booked herself a private tutorial to prepare her for taking charge of Harvard in July. Only it wasn’t so private. Harvard’s Loeb Drama Center was packed, and the crowd was on its feet applauding before the panelists could sit down. 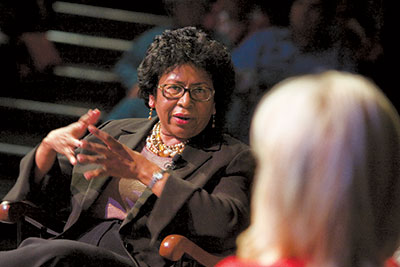 Simmons discussing women and higher education at Harvard in May.
Judith Rodin, the panel’s senior member, broke the Ivy gender barrier when she became Penn’s president in 1994. (She now heads the Rockefeller Foundation.) Ruth Simmons and Princeton’s Shirley Tilghman represented the Class of ’01, Faust joked, and Amy Gutmann, Tilghman’s provost at Princeton, succeeded Rodin at Penn in 2004. Since Faust took over Harvard’s helm July 1, four of the Ivy’s eight schools can boast a woman president, a landmark achievement that was unimaginable only twenty years ago.

While all the panelists acknowledged an early passion for scholarship, none imagined a college presidency. “I almost didn’t go to grad school because I didn’t think I could write an original dissertation,” Rodin joked. She noted, though, that she was fiercely ambitious. “In our time it was called ‘aggressive,’” she said.

Simmons said race had strongly influenced her ambitions and emphasized that African Americans’ options are still limited in academia. She said that once, after she’d written the top essay in a Harvard graduate course, the professor had refused to speak to her. “I had consigned myself to having a good career,” she said, “but not a leadership role.”

To make herself more available to students, Simmons said she left “a boutique position in a boutique department” (French literature at Princeton) to become a dean. She has been in administration ever since. Wryly characterizing her younger self as a “whiner,” Simmons said she was forced into leadership roles by her bosses. She noted that she’d shared a mentor with Gutman and Tilghman—former Princeton president Harold Shapiro. “We are creatures of our time,” Simmons said. “I try to remember that when my head is getting large.”

The panelists warned against assuming that women’s battle for equity has been won. As Tilghman observed, men still outnumber women on faculties, and gays, Latinos, African Americans, and other groups continue to struggle. Tilghman, a scientist by training, expressed the hope that universities will increasingly reflect the diversity of the society at large. But she said she was deeply concerned about increasing federal efforts to standardize education. “The degree to which we are different is our strength,” she argued. “We are fighting back. But the day we see the government dictating what should be the curriculum in classics is the day we should just pack up and go home.”