Lessons from the Bird

Although the ivory-billed woodpecker has long been thought to be extinct, in April, 2005 many of us were thrilled by a Cornell University report of its existence. The report ran on the Web edition of the journal Science, and was supported by a grainy bit of video shot in an Arkansas swamp. While I am not a bird enthusiast, I’m glad to root for a species coming back from extinction, and by all reports this is no ordinary bird. It earned the nickname Lord God Bird because its size and beauty have moved first-time viewers to take the Lord’s name in vain. 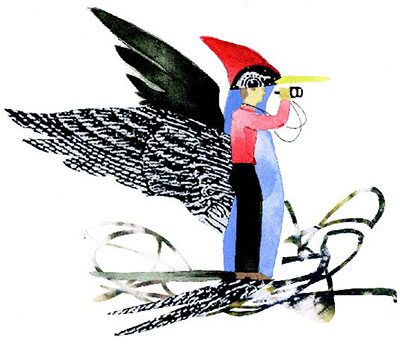 However from the first reports of the bird’s discovery, there were doubters. The videotape is blurry and some ornithologists claimed it really showed a pileated woodpecker. If I have this straight, the main features that distinguish the two species are their wing markings, but what one sees of them depends on the posture of the bird, something that is not clear on the basis of the video.

In fact, a second group of ornithologists was prepared to publish a rebuttal when the Cornell group made public some sound recordings that claimed to capture the distinctive “double knock” of the ivory-bill.

Despite heroic efforts, there have been no subsequent sightings of the bird, and in 2006 a group headed by David A. Sibley, the dean of bird-guide authors, published another article in Science analyzing the video footage in detail, and concluding that the bird shown was most likely the pileated, not the ivory-billed woodpecker. The Cornell group rebutted, and there the debate stands.

The discussion has now fallen off the radar screen, so to see the effect of two years with no confirmation of the finding, I Googled the bird. The Wikipedia article (Number Two in the page rank) was carefully neutral on the question of the bird’s existence, but to a first approximation all the other articles in the top ten entries seemed to assume that the ivory-bill is back from the dead. This struck me as odd, since I was getting a bit skeptical myself. For a time I was going to ask a colleague who is a serious birder about the current consensus, if there was any. I did not do it, however. He might ask me why I was interested and I was not prepared to give my answer: I want to know if science is compatible with belief in the Lord God Bird.

Well, I suppose by this point the reader must know that I am not really that interested in the ivory-bill. The woodpecker is a metaphor, or perhaps a synecdoche. I have more pretentious fish to fry. But let’s keep on with the pretense. It is much easier to take on woodpeckers.

The answer to my question, for the present, is “yes.” Serious scientists are having a serious discussion. Two years of failure are discouraging, but there are a lot of swamps to be explored and the ivory-bill is said to be reclusive by nature. But suppose another two years go by? My guess is that by then the supporters are going to feel a little isolated.

Another year and other scientists might start calling them “the believers.” A year after that they will have graduated to “true believers.” Another few years (this is a gradual process) and their fellow scientists will chuckle when talking about them—their papers will no longer be accepted in respectable scientific journals—they will no longer be taken seriously. At that point, or soon after, science and the ivory-billed woodpecker will have parted ways.

Eugene Charniak is a professor of computer science.

Reader Responses to Lessons from the Bird