“Imagine you are driving along I-95,” says Eli Adashi, dean of the Alpert Medical School. “You see a complex of four different buildings and a medical education campus all in one location. For the first time in Rhode Island history, you’d be looking at a true academic health center.” 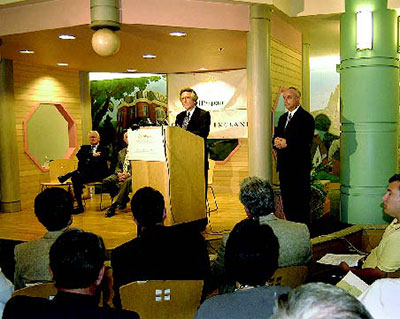 Adashi’s ambitious vision took a giant step toward becoming reality this July when the state’s two largest health care systems, Lifespan and Care New England, announced they would join forces. The move, which needs to be approved by the state and federal governments, would mean that Brown’s three teaching hospitals in south Providence—Rhode Island Hospital, Hasbro Children’s, and Women & Infants—would all have the same corporate parent.

In addition, the merger plans call for moving Butler Hospital, which specializes in adult mental health, to the south Providence site, bringing four major teaching hospitals all within walking distance of one another.

Now throw into the mix Brown’s own plans to build a new medical school nearby, and in five to ten years Providence could very well house the academic health center Adashi envisions. “It will mean a very different level of visibility for the medical school,” Adashi says. “It’s key to making this a better place.”

A similar merger was proposed in 1998 only to be scuttled two years later in the face of opposition from business groups, unions, and doctors worried that the new entity would wield too much power over health care in Rhode Island. Lifespan and Care New England own four and three hospitals, respectively, and an alliance would create a $2 billion entity controlling more than two-thirds of all the hospital services in the state.

“Suddenly you’ve got this big 800-pound gorilla in the room,” says Michael Migliori, ’79 ’82 MD, a clinical associate professor of surgery at Brown and a past president of the Rhode Island Medical Society. He says doctors worry that the new corporation may force the medical school’s faculty members to give up their private practices and work exclusively for it if they want to continue their association with Brown.

“We don’t have a knee-jerk opposition to these things, but we look at them very skeptically,” Migliori says.

But both hospital and Brown officials say the climate has changed since the late 1980s. The medical school plans to grow rapidly over the next few years as it makes use of the $100 million it received from entrepreneur Warren Alpert. According to Adashi, the school could benefit greatly from a partnership with a large corporate hospital. It would be easier, he says, to attract top-notch faculty and would help raise the medical school’s standing in the national rankings, further attracting top faculty and students.

Arthur Klein, Lifespan’s chief physician officer and an associate dean at Brown, predicts state officials will be receptive to the idea of the merger because of their stated desire to expand the health services industry in Rhode Island. “It’s a different time,” he says. The merger “is critical to the economic viability of Rhode Island.”

Looking ten years down the road, Klein envisions Women & Infants and Hasbro coming together to form a “nationally recognizable pediatric and neonatal center.” Meanwhile, he says, Butler Hospital’s integration with Rhode Island Hospital will enable a comprehensive approach to medicine where the body and mind are treated in tandem. “It will make our behavioral services of national significance,” he says. “It will be a national event.”