John Krasinski spent last April acting opposite George Clooney in the period football movie Leatherheads. This summer he shared top billing with Robin Williams and Mandy Moore in his first Hollywood romantic comedy, License to Wed. This month he begins his fourth season as resident heartthrob on NBC’s Emmy-winning comedy The Office.

It’s a good thing the actor didn’t listen to Jonathan Groff ’83. “I interned one summer at Late Night With Conan O’Brien, where Jonathan was the head writer,” Krasinski recalls. “We went to lunch and I told him I didn’t want to write anymore, that I wanted to be an actor. And Jonathan said, ‘The best advice I can give you is, don’t do that.’ ” 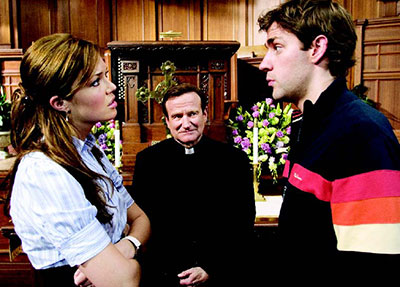 Four years later, the lanky actor ran into Groff at NBC’s media preview for The Office and Groff’s Father of the Pride. “Jonathan was stunned,” Krasinski grins, “and very happy to eat his words.”

Krasinski himself seems slightly stunned at his rapid ascent. After all, the six-foot-three actor harbored no show-biz ambitions when he arrived at Brown from his hometown of Newton, Massachusetts. Intent on becoming an English teacher, he studied literature and briefly entertained a fantasy career in the NBA—until he saw the guys on the team. “I was like, ‘They’re way too big and too good,’ ” he says.

His hoop dreams shattered, Krasinski joined the sketch group Out of Bounds as a freshman. “That changed everything,” he says. “It was formatted like Saturday Night Live, but a little edgier.” After honing his comedy chops on campus, Krasinski attended an intensive fourteen-week acting workshop at the O’Neill National Theater Institute in Waterford, Connecticut, then moved to New York City and waited tables for three years.

He deliberately avoided any day job that smacked of the corporate drudgery portrayed in The Office. “I tried very hard not to go through that whole routine, and now I know why!” To play Jim Halpert, the bored paper-products employee he portrays on TV, he says, “I draw upon that fear of being in an office and realize, if only by lore, how bad it can be.”

While on hiatus from The Office, Krasinski has been trying out life behind the camera as well. He spent much of last summer hunkered down in an editing suite completing his directorial debut, Brief Interviews With Hideous Men, which he adapted from the novel by David Foster Wallace. He’d first read it at Brown and has been in love with it ever since.

With his office fears abated, he says, “The only thing I’m terrified of now is David Foster Wallace fans, because he writes so well. I hope I do him justice.”

Reader Responses to The Accidental Star