By Hugh Hart / November / December 2007
December 3rd, 2007
After director Todd Haynes’s triumph with Far From Heaven, which was nominated for four Academy Awards, you’d think getting Hollywood backing for his next film would be a slam-dunk. Right?

Wrong. For I’m Not There, his look at the life and times of Bob Dylan, Haynes had secured song rights from the famously unpredictable bard, and had recruited Cate Blanchett, Heath Ledger, Christian Bale, and Richard Gere to play various incarnations of Dylan. But producers were leery. So Haynes turned once more to his longtime producer Christine Vachon, who pieced together funding from French and Italian investors. Now completed, I’m Not There earned strong reviews at the Venice International Film Festival in September and opened in November in New York City and Los Angeles, before being released around the country. 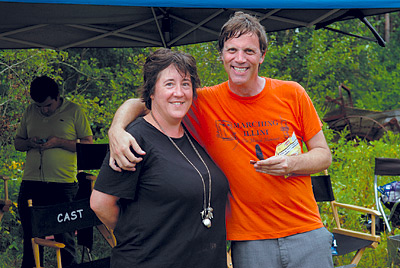 “At the most fundamental level,” Haynes says, “my films wouldn’t come into being without Christine.” He says he’s not willing “to throw myself across the train track at the final moment when the entire movie will come screeching to a halt. That’s what Christine does.”

In a recent conference call with Vachon in New York City and Haynes in Portland, Oregon, the producer downplayed her role: “These are Todd’s movies,” she says. “He conceives them, he usually writes them, he directs them. I try to get the money together and create an atmosphere conducive to Todd doing his best work. I put together the machine so that he can run it.”

L.A. native Haynes, and New Yorker Vachon met in Brown’s semiotics program, “where all the renegade, postmodern kids in black convened at Adams House,” Haynes recalls. “It was a very exciting place to be if you had creative ambitions or curiosity.”

On weekends, Vachon made omelets at a campus eatery “for these preppy guys who’d come in wearing their robes and pajamas,” Haynes says, describing their first encounter. “She this tough, punky-looking woman in a big white T-shirt spattered with egg, holding a spatula.” Haynes watched as someone handed her a glass containing what appeared to be beaten eggs, but was actually orange juice. “She threw it on the grill and it started to burn up,” Haynes says. “Christine gave the guy the look of death.”

Haynes says professors of modern culture and media Michael Silverman and Mary Ann Doane helped solidify his instinctive view of film as a “social product. The semiotics program articulated instincts I already had, that film was not some unencumbered mode of expression, but has a direct relationship to social ideas and meaning and institutions,” he says. “Making a film, you engage all these complex systems and languages and ideas.” Between classes, Haynes designed sets for and acted in Production Workshop shows, including a notorious interpretation of Jean Genet’s The Maids. “We played it as androgynous concentration camp captives with badly shaved scalps and severe gray dresses,” he recalls.

Vachon, meanwhile, was creating her own campus buzz with edgy short films. In 1987 the two joined Barry Ellsworth ’83 in New York City and founded Apparatus Productions to fund and make noncommercial films. One day Haynes showed Vachon a rough cut of Superstar, a film he was making in his spare time. He used Barbie dolls to depict the decline of pop singer Karen Carpenter, who died of anorexia nervosa in 1983. Vachon took one look, Haynes recalls, and said, “I’d like to produce your next film.”

Their first joint effort, the 1991 AIDS-themed Poison, was followed by the critically acclaimed art-house dramas Safe, which was released in 1995 and starred Julianne Moore as an alienated agoraphobic, and the 1998 Velvet Goldmine, about the rise and fall of a David Bowie–esque rocker. All became cult classics.

In 2002, Vachon produced Far From Heaven, which won five Independent Spirit Awards; Haynes’s screenplay was nominated for an Oscar. Still, the two faced a blanket “no thanks” when they pitched I’m Not There in Hollywood. “It was a very dense script,” concedes Haynes. Discarding conventional chronology in favor of impressionistic character studies, he cast six actors to portray six different phases in Dylan’s creative evolution. While the offbeat approach captured Dylan’s imagination, it left studio chiefs cold, Haynes says. “The very thing that made Dylan sign on was absolutely the obstacle [to financing].”

Chiming in over the phone from New York City, Vachon is blunter: “We are living in such a risk-averse atmosphere culturally, intellectually, and politically,” she says. “That makes it challenging to make movies that don’t fit into a box.”

Watch a clip of Cate Blanchett as Bob Dylan here.