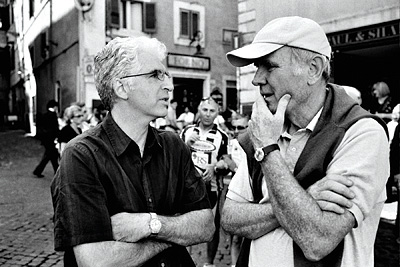 The son of an Orthodox Jewish father and an Episcopalian mother, Oren Jacoby grew up in what he calls "the religion of the peace movement and the religion of civil rights." So it's no surprise that the documentary filmmaker has focused his lens on the complexities of faith.

His 2004 short documentary, Sister Rose's Passion, which was nominated for an Academy Award, follows a Dominican nun's campaign against anti-Semitism and her success persuading the Catholic Church to refute its portrayal of Jews as Christ killers. His new film, Constantine's Sword, follows former Catholic priest James Carroll as he traces the violent and messianic symbolism of the cross. The film asks how bearing a cross—a symbol of suffering and self-sacrifice—evolved into the triumphalism of wielding a sword. It exposes Christian evangelism and anti-Semitism in the U.S. Air Force and raises the specter that, for some politicians at least, the War on Terror masks a holy war against both Judaism and Islam.

Carroll, a best-selling novelist and Boston Globe columnist, wrote the book Constantine's Sword: The Church and the Jews: A History in 2001. Seeking to turn it into a movie, his former editor at Houghton Mifflin, Wendy Strothman '72, introduced Carroll to Jacoby. (Both Strothman, who is now a literary agent, and Jacoby's wife, Betsy West, are Brown trustees). Jacoby, who at the time was working on Sister Rose and so was immersed in the history of Catholic anti-Semitism, says he and Carroll hit it off immediately. Their collaboration made its international debut at the Los Angeles Film Festival last June and received enthusiastic early reviews.

The son of an air force general who was prominent in defense intelligence during the Vietnam War, James Carroll won the 1996 National Book Award for his memoir An American Requiem: God, My Father, and the War that Came Between Us, the story of his rift with both his father and his church. Since leaving the priesthood, Carroll has remained a devout Catholic but one who outspokenly holds his church to its own highest moral standards. In Constantine's Sword he traces Christianity's evolution from a faith that promoted charity and the brotherhood of man to one that also embarked on the crusades.

Jacoby began his twenty-year directing career with a BBC series on the collapse of the Soviet Union. ("Good timing," he says; the collapse came right after he'd studied Russian at Brown and earned an MFA in directing from the Yale School of Drama). Returning from Russia to the United States, he explored his interests in theater, jazz, and dance through nonfiction films for public television, National Geographic TV, HBO, and other outlets. A current fictional project is an adaptation of Caleb Carr's novel The Italian Secretary.

Lately, Jacoby says, he's been especially drawn to topics that wrestle with complexities and ambiguities—especially in colonial history. He recently completed a documentary about the Marquis de Lafayette. "He was the first pop star," Jacoby jokes. "He was the friend of all of the first seven presidents. He toured all twenty-four states, and huge crowds turned out to hear him speak. He reminded Americans of what they stood for."

For an upcoming documentary about the American Revolution, Jacoby says, "I've been reading a lot about the Founding Fathers, and this notion of religious freedom was critical to them—the freedom not just to choose a religion, but to choose not to have any religion." The notion of a firewall between church and state was fundamental, he stresses.

Jacoby says he doesn't see himself as a political filmmaker. Drama school and an undergraduate degree in comparative literature taught him that the story has to be the thing, he says. But he admits, "I do get fired up."