A new program provides help for students from sub-Saharan Africa.

A nation's well-being comes as much from its intellectual capital as its financial wealth, and in January, President Ruth Simmons announced a new program for helping African countries develop theirs. Thanks to a $5.75 million gift from Israeli businessman Idan Ofer, the University will create scholarships for graduate and undergraduate students from sub-Saharan Africa. 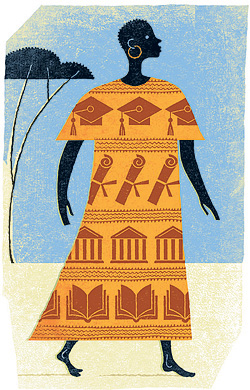 Timothy Cook
The Advancing Africa Scholarship Fund will provide $250,000 a year in scholarships to provide higher education to a broader cross-section of African citizens. Recipients will be admitted through the regular Brown admission process and will be required to return to their home countries for at least two years after graduation, during which time Brown will provide a stipend.

Simmons and Ofer, a Brown parent who chairs the Israel Corporation (that nation's largest holding company) and ZIM Integrated Shipping Services, announced the scholarship fund January 25 from Davos, Switzerland, where both were attending the World Economic Forum. They hope their effort helps build an intellectual infrastructure in Africa's poorest countries. "Sub-Saharan African nations face poverty, illiteracy, illness, and other significant obstacles to economic and social development," Ofer said in a press release at the time. "Enabling students to be educated at one of the best universities in the world will give them the tools to help their nation."

At Brown, limitations on financial aid to international students has led to economic disparity in the student body; only very wealthy families overseas have been able to afford the cost of U.S. universities. The new scholarships aim to help ameliorate that problem with funds for students to visit home twice during their time at Brown and by providing the stipends once they return home.