"We just love Africa," says Marcia McBeath, explaining why she and her husband have spent their retirement with the Peace Corps. 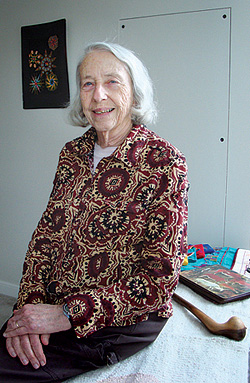 Most people like to settle down in their old age.

Not Marcia McBeath. Since she retired in 1986, McBeath and her husband, Chuck, have spent more than 13 years serving in six different countries with the Peace Corps. A former schoolteacher and counselor, McBeath has worked in remote villages with no running water or electricity. Two of the countries where she was stationed were in the Caribbean—Jamaica and St. Lucia—and four in Africa—Lesotho, Namibia, Kenya, and C√¥te d'Ivoire.

McBeath says she and her husband wanted to join the Peace Corps back in 1961 when President John F. Kennedy created his "grand and global alliance" of volunteers fighting tyranny, poverty, and disease. But practicalities intervened. "We had four small children at the time," McBeath says. "We just sort of forgot about it." Then in the early 1980s, the couple happened to walk by a Peace Corps office in Washington, D.C., where they were living at the time. "An eager young recruiter came out and got ahold of us and the next thing you know we were in the Peace Corps," she says.

Now 83, McBeath says she and her husband have often played the role of elder advisers overseas. She says the locals in the towns and villages in which they were stationed often called them "grandmother" and "grandfather." Younger volunteers often came to the couple seeking guidance. Overall, she says, "We were accepted as being the same as the other volunteers," she says. "We were invited to their parties, and even went to some of them."

It wasn't all parties and counseling, though. In September 2002, soon after they'd arrived in C√¥te d'Ivoire, war broke out. The McBeaths thought they were safe for the time being, since there were no hostilities in the country's central region, where they were stationed. Then a call came from the Peace Corps office: fighting had broken out nearby and they had to evacuate immediately. With just fifteen minutes to catch the next bus to the capital, the couple packed a few changes of clothes and high-tailed it out of there. They were told someone from the Peace Corps would go back and collect the stuff they'd left behind. "For some reason, this didn't happen," says McBeath. Lost were cherished family photos, a computer disk with vital personal records, and almost all of their clothes. Still, when the Peace Corps asked the couple if they would like to go back to the United States, they said no, bought themselves some used clothes at a market, and went off to volunteer in Kenya. "We just love Africa," McBeath explains.

For the last three years, McBeath and her husband have been living in Seattle. They want to sign up for another tour, but the Corps won't let them. "They told us they have trouble placing couples and wanted to give other people a chance," McBeath says. And so, for at least the near future, they will be settling down. "When we got married, there were three things we wanted to do: travel, get more education, and have children," she says. "And we've done all three." —L.G.

Reader Responses to Settling Down